The movie «Fantastic Beasts and Where They Live» was released in 2016. The film is based on the works of J.K. Rowling, and its action takes place in the world of Harry Potter. But they happen before the young wizard’s events. Johnny Depp played the role of one of the key characters in this film, a dark wizard Gellert Grindelwald.

In 2016, Johnny Depp began the divorce process with his then-wife Amber Heard, who accused him of domestic violence. The process is completed in 2017. At the same time, news that the actor could beat his wife questioned his participation in the sequel «Fantastic Beasts», which must be released in 2018. However, the creator of the novels about Harry Potter J.K. Rowling made a statement saying that Depp needs to stay in the picture. 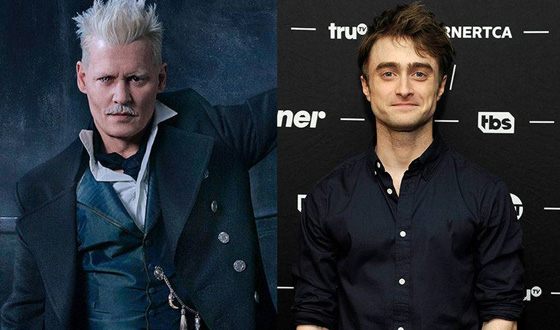 Daniel Radcliffe believes that it is impossible to shoot Depp in the sequel «Fantastic Beasts»
As for Daniel Radcliffe, who became famous thanks to the role of Harry Potter, he said that Depp and his happenings made him a painful impression. He noted that famous players being kicked from teams for misconduct like drug use, as they are celebrities. At the same time, Radcliffe reminded the young actor of «Harry Potter», who was sentenced to correctional labor for the cultivation of marijuana. The artist noted that the act of Depp is even more serious so that it needs to be punished more.