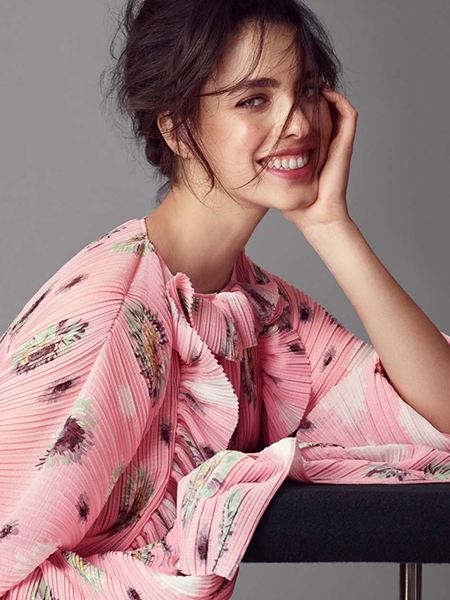 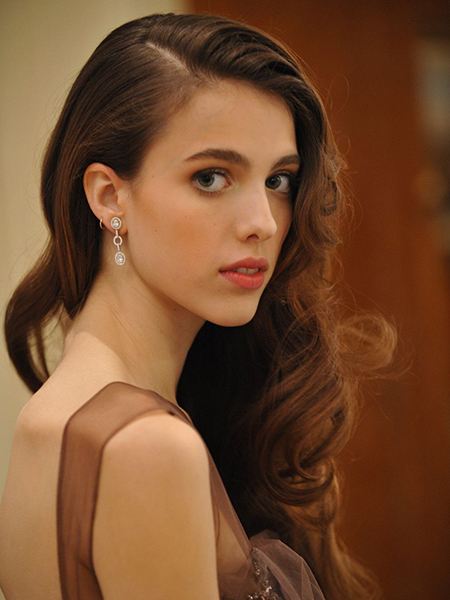 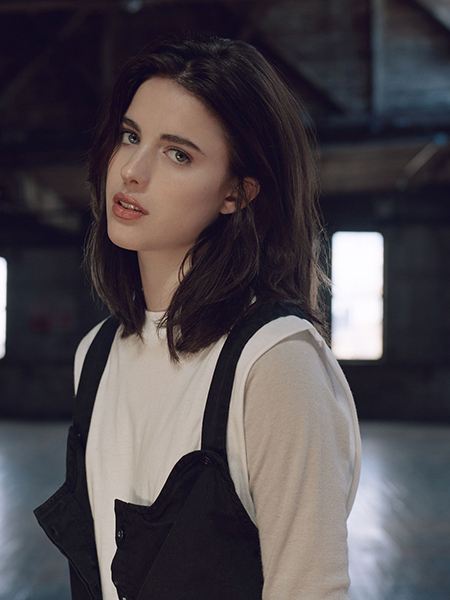 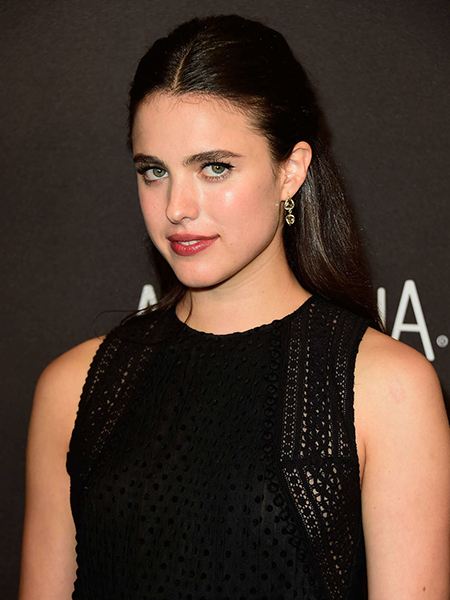 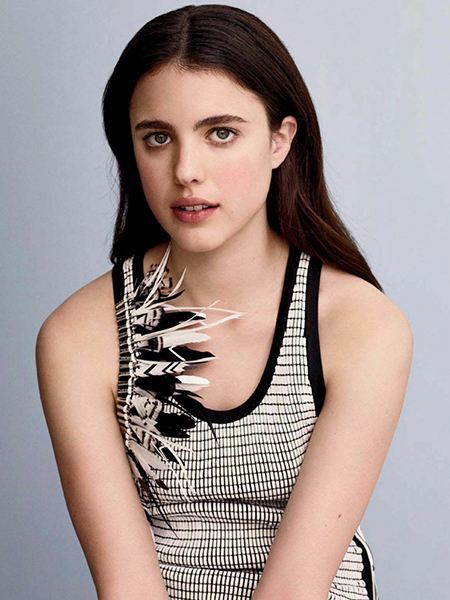 Margaret Qualley is a rising Hollywood star who has made herself known as Jill Garvey in The Leftovers, a science fiction series on the HBO channel. She played one of the leading female roles in Quentin Tarantino’s film Once Upon a Time in Hollywood. In addition to an acting career in cinema, Qualley is engaged as a model in the modeling business; she starred in the commercials of the brands such as Ralph Lauren, Valentino, and Kenzo. She was nominated for Emmy Television Award. Net worth: $3 million. 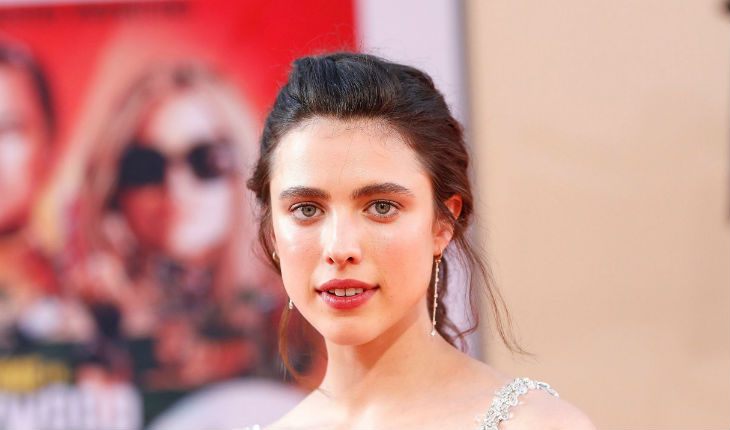 When the popular Hollywood actress Andie MacDowell was pregnant with her third child, she had a feeling that a girl would be born. In the fall of 1994, it turned out that she was right. The charming baby was named Sarah Margaret. 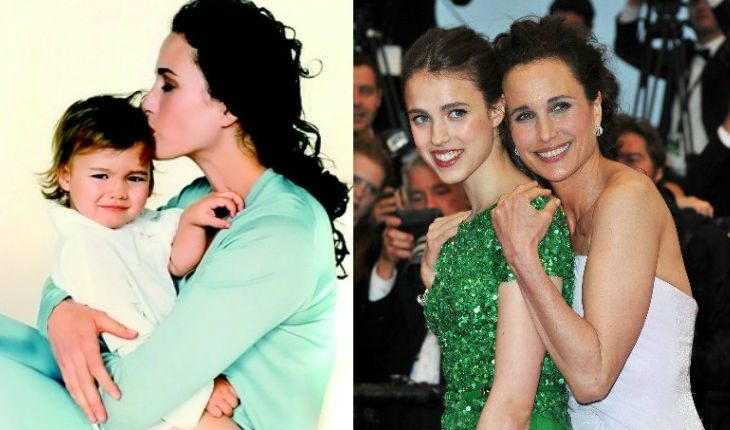 Margaret Qualley in childhood and now
The little girl spent her early years on her father’s huge ranch in Missoula (by the way, without a TV). The first-born sister of the future actress, Justin (born in 1986) and the eldest daughter Rainey (born in 1989), began to watch over their sister in every possible way, especially after their father, musician and mannequin Paul Qualley, had left the family and moved from Montana, where they lived at that time, to Panama. It was much more difficult for the elders to endure the divorce of their parents than for the five-year-old Margaret. 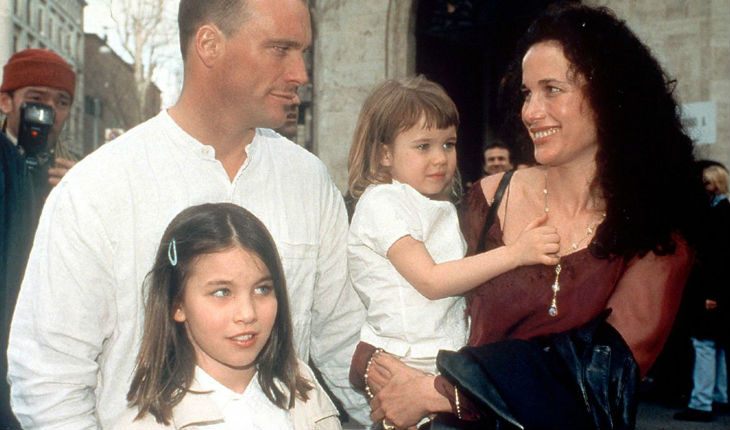 Margaret Qualley with parents and elder sister
Paul tried to regularly communicate with all his children, helped them financially, and gave gifts, which does him honor. When the grown-up Maggie asked for money to study at the North Carolina School of the Arts, he also did not refuse, although at that time the girl was only fourteen years old.

A year later, the flexible and elegant Margaret began to take choreography courses at American Academy. According to Margaret, she loved dancing “on a spiritual level,” but it included exhausting work, strict discipline, diet, and the prospect of a short ballet career. Therefore, having got an eating disorder by the age of 16 (which she later managed to overcome), she decided not to accept the proposal to join the troupe of the North Carolina Dance Theater, but to stay in the Big Apple City and work as a model.

The girl had excellent appearance, having inherited “sincere” (according to journalists) eyes from her father and a “radiant” complexion from her mother, which, in conjunction with full lips and a nice gap between her front teeth, gave her a unique charm. 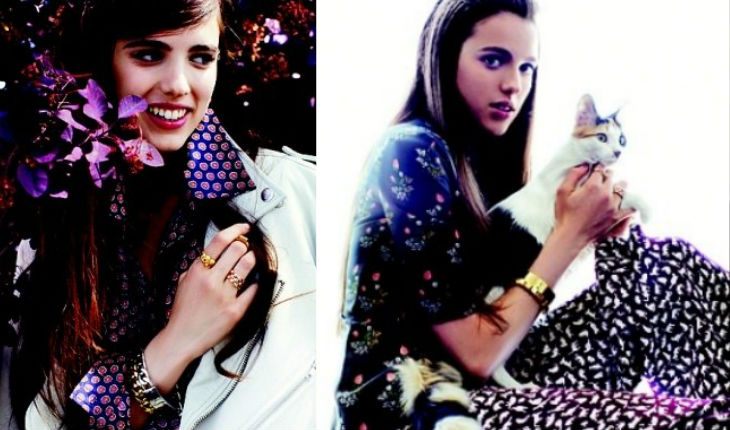 Margaret began her career as a model at the age of 15
While the elder sister was building a career as an actress and singer under the pseudonym Rainsford, and her brother plunged headlong into the real estate, the sixteen-year-old youngest one began to master the modeling business. New York Fashion Week held for Alberta Ferretti, and afterward, Paris Fashion Week for Valentino and Chanel took place with her participation. In addition, the girl participated in the filming for Vogue, Allure, and Interview and advertised well-known brands. In many things, the mother, who knew the modeling business firsthand, gently helped her daughters.

Spike Jonze’s promotional video for the Kenzo line, where Margaret took part, was very popular on the Internet. According to the plot, the girl performed by Margaret was tired of sitting and pretending that she was interested in listening to the official speech at a dinner party. She went to the entrance hall and started to dance crazily and ghastly to the track “Mutant Brain” by Ape Drums & Sam Spiegel (ft. Assassin), being affected, demonstrating motor convulsions, jumping, shooting with lasers, and tipping out the accumulated irritation.

The model also collaborated with Tory Burch, starring in the video L’Américaine, where she portrayed a romantic American girl in the French capital, as well as with Karl Lagerfeld, after whose death she dedicated him some lines on her Instagram.
Margaret Qualley in L’Americane commercial
Nevertheless, Qualley felt that the catwalk was not all she wanted from life. After consulting with her beloved sister, who she tried to imitate in everything in childhood, Margaret decided that she was quite ripe for a film career. She began to act according to a previously drawn-up plan.

She graduated from acting classes at the Royal Academy of Arts in London, received a specialized degree at New York University. She overcame some self-doubt when she first appeared on the set in Gia Coppola’s drama Palo Alto and embodied the character of Raquel.

After the successful debut, the aspiring actress received an offer to play Jill Garvey in The Leftovers, a science fiction series on the HBO channel. The film was popular; viewers were looking forward to the next series. Qualley was noticed. Her agent began to receive offers about filming in other projects. 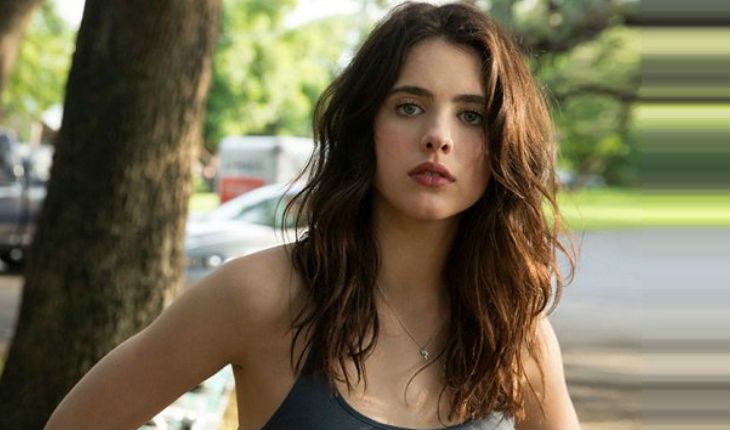 Margaret Qualley in The Leftovers series
The talented and vigorous Margaret effectively performed Amelia Kuttner in Shane Black’s The Nice Guys. Shooting in this comedy action movie was unforgettable for the young actress thanks to the participation of such stars as Kim Basinger, Russell Crowe and Ryan Gosling. She starred simultaneously in the lead role in the short romance movie Dream Girl, which she also coped brilliantly. 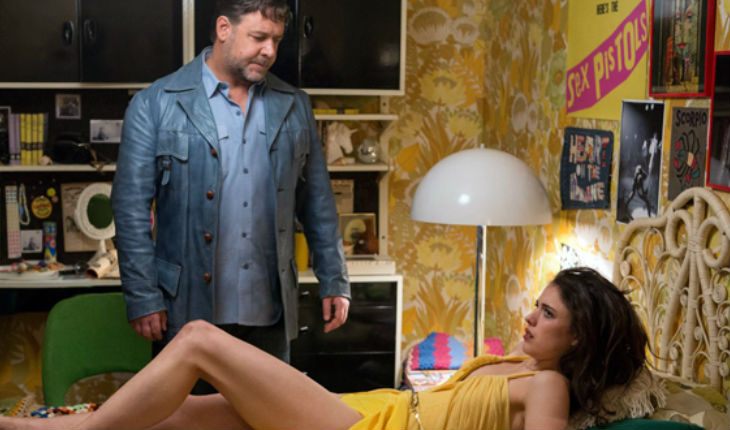 The Nice Guys: Margaret Qualley and Russell Crowe
The character of Sister Kathleen in Maggie Betts’ drama Novitiate was much more complicated for the actress. Qualley lived with her on-screen character almost every episode. The viewers appreciated her efforts. The actress starred simultaneously in the detective romance film directed by Shawn Christensen The Vanishing of Sidney Hall (Alexandra) and in the horror film Death Note by Adam Wingard (Mia Sutton). 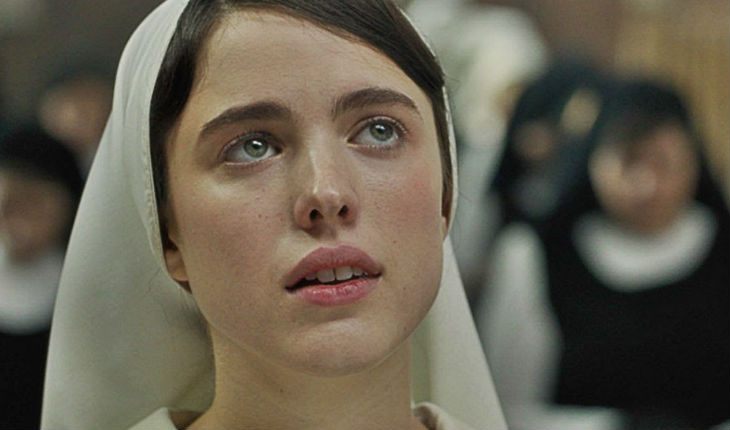 Shot from the film Novitiate

Margaret is so absorbed in work that blames her late development for the lack of personal life and in this regard, the unwillingness to start a serious relationship. The more so, that she already made one attempt, dating for several years Nat Wolff, an actor, and musician who starred with her in Death Note. 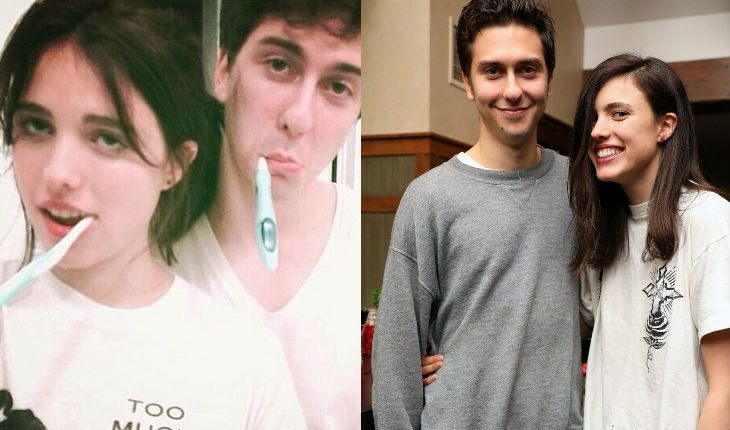 Margaret Qualley and Nat Wolff
At the end of 2020, it became known that Margaret had an affair with the disgraced filmmaker Shia LaBeouf. This happened almost immediately after the scandal involving the director - ex-girls accused him of emotional abuse. Apparently, Qualley was not embarrassed. Fans are confident that their relationship began after co-starring in the movie Love Me Like You Hate Me. 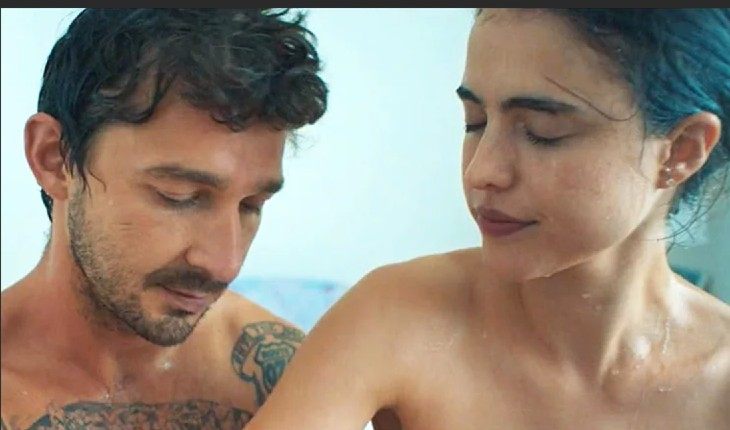 Margaret Qualley and Shia LaBeouf
Qualley lives with her sister Rainey in Los Angeles and to the biting questions of the journalists whether she is a lesbian, she simply answers that she is not a lesbian and that simply for a given period of time, work is a priority for her. And in rare hours of leisure, she prefers dancing to meeting young people and starting relationships. The girl is a pacifist, feminist and vegetarian.

The year 2018 brought Qualley work with Tim Sutton in his drama Donnybrook, but the most fruitful for the roles was 2019, as well as the most memorable, since participation in the cult film by Quentin Tarantino Once Upon a Time in Hollywood was a dream that came true for the girl. When she was approved for the role of a hippie girl nicknamed Pussycat, she admitted that the rehearsal with Brad Pitt seemed to her something unreal. 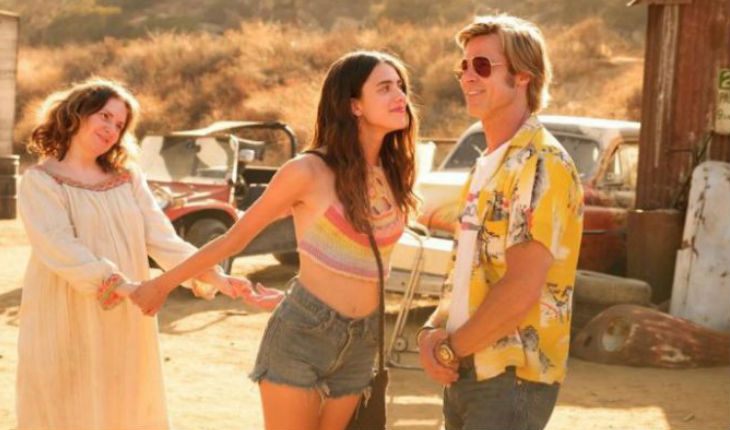 Once Upon a Time in Hollywood: Margaret Qualley and Brad Pitt
In addition, the actress starred in Jonathan Helpert’s science fiction film IO in tandem with Anthony Mackie and also in Rashid Johnson’s drama Native Son along with Ashton Sanders. She appeared in Rhys Ernst’s comedy Adam, played as Melissa in the Canadian thriller Strange but True directed by Rowan Athale, together with Kristen Stewart finished work in the joint US-British project Seberg directed by Benedict Andrews. 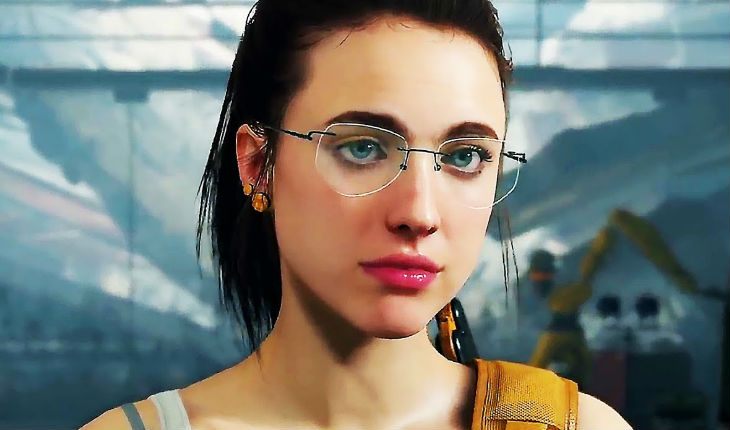 Margaret Qualley worked on the computer game Death Stranding
In the same year, Margaret was first nominated for Emmy Award (which traditionally takes place in September) for a best supporting role in the biographical musical drama Fosse/Verdon. This is a story about a legendary choreographer and dancer who turned the world of Broadway upside down. Though the role is not major, it is significant for the actress, because, as she admitted, she worked on the set with some of her favorite actors in the world: Sam Rockwell and Michelle Williams. 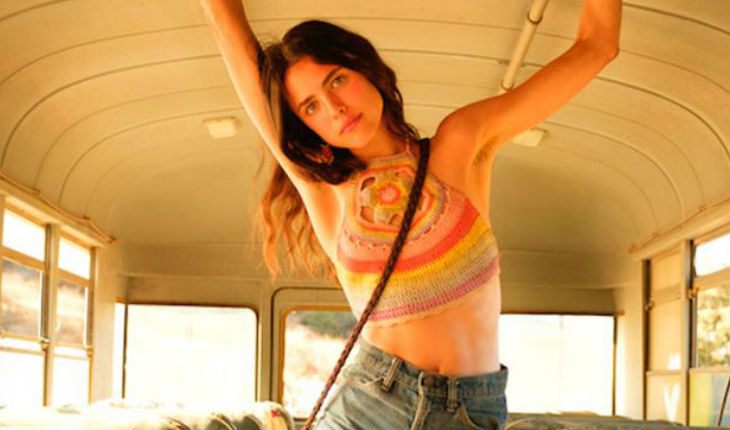 Shot from the movie Once Upon a Time in Hollywood
The embodiment of Ann Reinking’s character, who had long been Qualley’s idol, became not just a work for her, but a matter of honor. It will be just fair if the reward goes to Margaret. Mom and dad, brother and sister, as well as numerous fans touchingly congratulated the actress on her first serious success.

On August 30, at the Venice Film Festival, there was a presentation of the political thriller Seberg with the participation of Qualley. This time her colleagues on the set were Kristen Stewart, who received the lead role of the legendary actress Jean Seberg, Jack O’Connell, Anthony Mackie, Zazie Beetz, Colm Miney. 2020 has become the year of major premieres for the actress. She starred in the films Wake Up and Love Me Like You Hate Me, also My Salinger Year. At the same time, the premiere of the series Acting for a Cause took place, where Margaret also took part.
Wake Up: Directed by Olivia Wilde – Trailer
In 2021, the premiere of the mini-series Maid, where Qualley co-starred with Billy Burke and Andy McDowell, will take place. At the same time, the film North of Normal will premiere. Margaret is also working on the film The Stars at Noon, where she will perform in an acting duet with Robert Pattinson and another film - A Head Full of Ghosts.
The Stars At Noon Promotional Trailer

Ricky Gervais in his youth
3.0

Simone Ashley where did she study
4.2

Sergey Lavrov who are his parents
6.0

Alexandra Daddario how old is she
5.9