Hugh Grant is a famous actor from Great Britain, who was brought to fame by numerous roles in romantic comedies and melodramas. A person who has the highest Golden Globe, BAFTA, Cesar, and the Venice Film Festival Award cinema awards in his arsenal, but stating at the same time that acting has never been his vocation, but just a job well done. 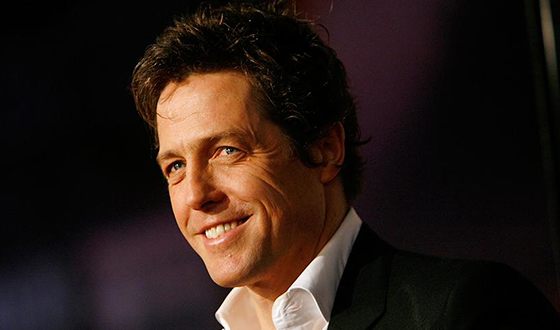 In the photo: Hugh Grant

The future movie star was born on September 9, 1960, in the family of former military James Murray Grant, who took up a small business, and teacher Fynvola. Hugh was their second child. His older brother James made a successful career in the US banking industry.

Though there are quite not a few representatives of the English aristocracy among the ancestors of Grant, Hugh’s family was very modest in wealth - enough for life, nothing more. In his interviews, he has repeatedly admitted that the lack of luxury only benefited him and his brother, as they realized that they could only count on themselves since childhood. 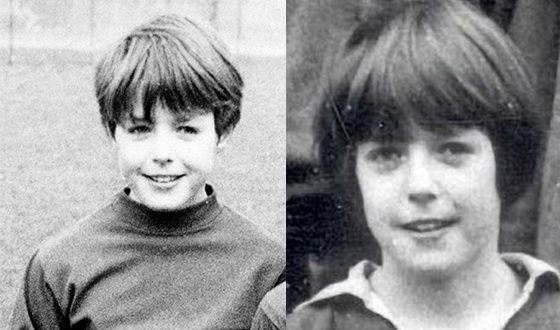 Hugh Grant in childhood
The attractive appearance made Hugh a lot of trouble in adolescence, he considered it too sweet and not manly. In addition, Hugh went to school for boys and because of his angelic appearance, he was given the female roles in all the school plays. To correct the situation the guy took part in fights, broke his face, even inflicted wounds on himself, believing that the scars would make him brutal and increase his chances for the opposite sex. Subsequently, he recognized his actions in adolescence as a big mistake.

In 1979 Grant graduated from high school and, choosing the profession of an art critic, was enrolled in the prestigious college of Oxford. His student life passed very actively. He joined the club for selected students of the Piers Gaveston Society and began performing in a theatrical comic troupe. 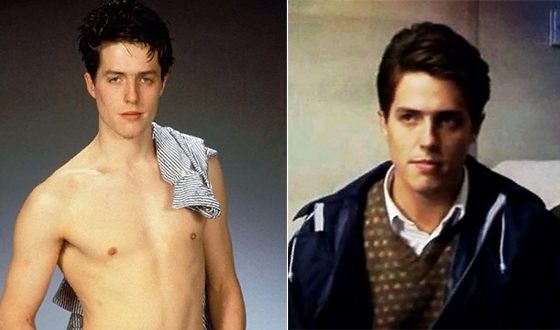 Hugh Grant at young age
Michael Hoffman turned out to be Hugh's fellow student, who later became a famous American film director. He offered Grant to make a joint film and the idea turned out to be successful. The Privileged tragic comedy, released in 1982, was an excellent debut for the novice actor and he was showered with numerous offers by show business agents.

After graduating from college Hugh refused to continue his studies at the Courtauld Institute of Art of the University of London, making a choice in favor of the acting profession. He performed in theatrical staging, reviewed books, did radio advertising for the BBC, tried himself in the literary niche. In 1985-86 Grant showed up a lot in various shows on television, television films, and TV shows, among which were The Last Place on Earth, The Detective, Honour, Profit, and Pleasure, Jenny's War. 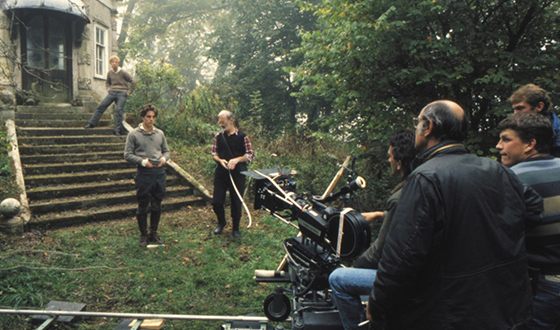 On the set of the picture Maurice
Hugh's return to the big screens took place in 1987 in the film about gay love Maurice directed by James Ivory. Along with his partner James Wilby, Grant was awarded the main award for the best male role in the Venice Festival. The huge success of the picture opened Hugh's way to new star roles. 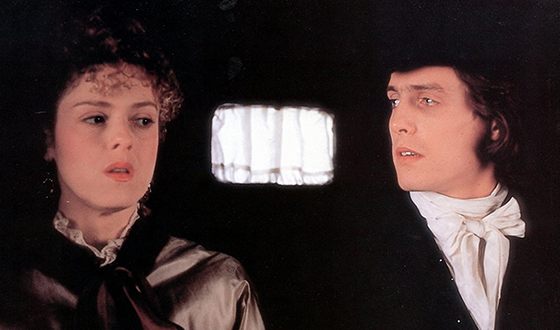 Hugh Grant playing Chopin in the Impromptu
Hugh starred in several films during the next 7 years, but his role as Chopin in the Nocturnes and Impromptu films, as well as Byron in the Rowing with the Wind melodrama, deserves special attention. It was on the set of the latter when the love affair with Elizabeth Hurley began, which lasted more than 10 years. Also, The Lair of the White Worm, The Remains of the Day, the Bitter Moon films were released. 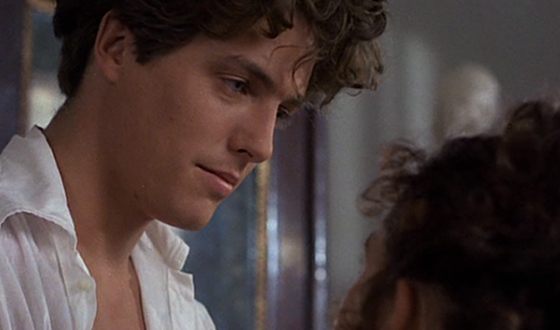 Hugh Grant in the Rowing with the Wind
1994 was a turning point in Grant's career. The "Four Weddings And A Funeral" romantic light comedy, where he played alongside Andie MacDowell, was an incredible success and was marked with a number of all kinds of awards, including two Oscar nominations. And Hugh received his first two awards – the Golden Globe and BAFTA. After the release of the picture, Grant was invited to Hollywood, where he didn’t hesitate to move to with Elizabeth. 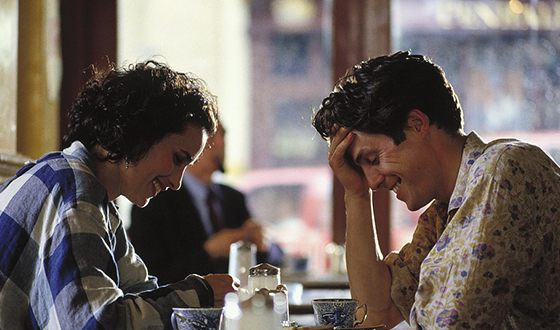 Hugh Grant and Andie MacDowell in the "Four Weddings And A Funeral"
In 1995 the actor was lucky to receive the lead roles in several Hollywood films at once - Nine Months, Extreme Measures, Sense and Sensibility, An Awfully Big Adventure. But the sex scandal involving prostitutes, which happened the same year, greatly damaged his reputation and knocked him out of his profession for several years. Grant was able to rehabilitate himself in the eyes of the public only in 1999 with the release of the Notting Hill melodrama, where he appeared in a duet with Julia Roberts and earned a Golden Globe nomination. 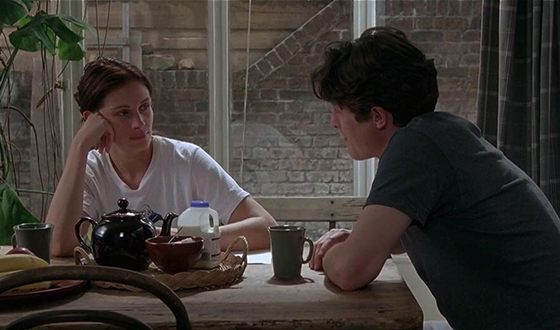 Hugh Grant and Julia Roberts in the Notting Hill
The next few pictures released one after another in the early 2000s only fortified Grant's star status and finally approved him in the image of a handsome smoothie. Among them are the Bridget Jones's Diary along with Renee Zellweger, the Two Weeks Notice with Sandra Bullock and Love Actually accompanied by Keira Knightley, Liam Neeson and Colin Firth. The picture About a Boy was nominated for an Oscar and brought Hugh several awards, including the main German film award The Goldene Kamera and the Empire cinema magazine award. 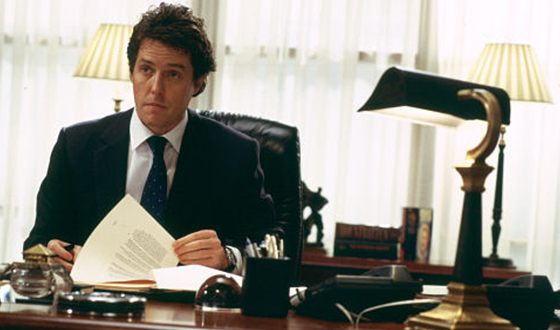 Hugh Grant in Love Actually
2007 was marked in the actor’s career with the release of the next comedy with a romantic slant Music and Lyrics with charming shooting partner Drew Barrymore.
Hugh Grant in Music and Lyrics
A couple of years later in 2009, he starred in a duet with Sarah Jessica Parker in a comedy film called Did You Hear About the Morgans?. Grant personally attended the premiere of the film in Moscow. 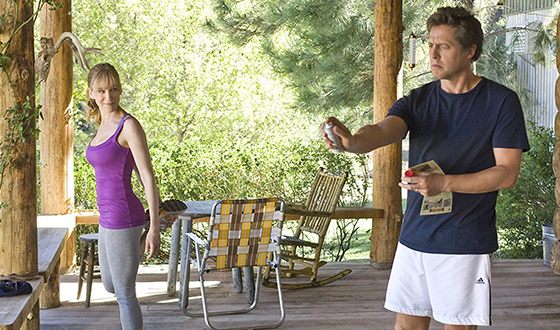 Hugh Grant and Sarah Jessica Parker in Did You Hear About the Morgans?
From the subsequent works, the participation in the 2012 historical fiction film Cloud Atlas deserves attention, where he appeared in the images of six different heroes. In the same year, the actor first tried himself in voicing animation characters. The main character of The Pirates! In an Adventure with Scientists! cartoon- a brave and charming pirate captain spoke in his voice.
Hugh Grant on acting
In 2015 Hugh managed to collaborate with director Guy Ritchie on the set of The Man from U.N.C.L.E. action film. He starred in the unusual role of the chief of British intelligence.
Hugh Grant and Meryl Streep about Florence Foster Jenkins
In 2016 the Florence Foster Jenkins comedy was released, renamed Prima Donna in the Russian box office. Brilliant and inimitable Meryl Streep was Grant's partner. According to the actor, it was her participation that influenced his decision to play in the picture. Grant also mentioned in an interview that he was always afraid of being dishonored in front of the great actress who has two dozen Oscar nominations in her background. Their teamwork was awarded many awards and nominations and Grant earned the Golden Icon Award. 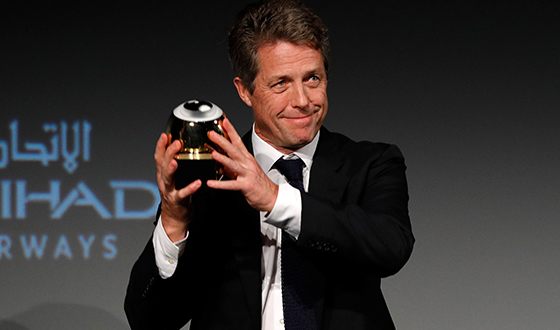 Hugh Grant and his Golden Icon Award
There were two films released with him in 2017. One of them is the Red Nose Day Actually comedy by Richard Curtis. This is a sequel of the Love Actually romantic film released in 2003. Hugh met again with his long-time partners - Rowan Atkinson, Keira Knightley, and Colin Firth on the set. The second film, in which the actor starred, is a sequel to the touching story about everyone’s favorite teddy Paddington - Paddington 2. Grant appeared as a cunning and dodgy villain in the picture.
Paddington 2 (trailer)
In 2018 the A Very English Scandal biographical series was released on television, where Hugh brilliantly turned into British homosexual politician Jeremy Thorpe, prosecuted in the 60s of the XX century for attempting to kill his lover. Actor Ben Whishaw was Grant's partner in the film.
A Very English Scandal (trailer)

Hugh Grant is actively involved in charity issues. He regularly makes donations to organizations involved in the fight against cancer, including the Oxford DIPEx Charity, the Marie Curie charity, the Pancreatic Cancer Action Foundation, which deals with early diagnosis of pancreatic cancer. It is worth noting that Hugh is familiar with this problem since in 2001 his mother died of this disease. He also sponsors the Fynvola charity foundation named after her. 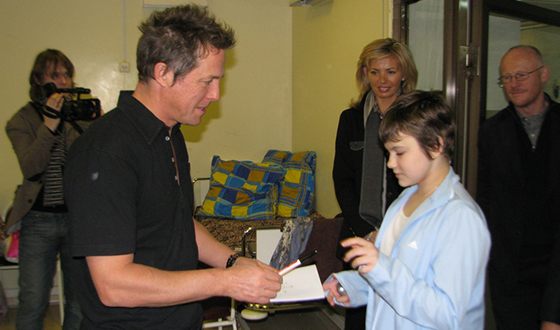 Hugh Grant at the Moscow Cancer Center
In addition, Grant actively collaborates with the Raisa Gorbachev Foundation, which was established in England to help Russian children with cancer. In 2008 at one of the auctions held by the foundation he bought dinner with Mikhail Gorbachev, paying £ 250,000 for it. The entire amount was transferred to one of the Moscow children's oncology centers, which the actor personally visited the same year.

Until 2018 Hugh was known as an ardent supporter of the bachelor lifestyle, completely denying family values. In his interviews, he explained this by saying that marriage, in his opinion, brings a sense of ownership and jealousy to the relationship, while killing the whole romance. 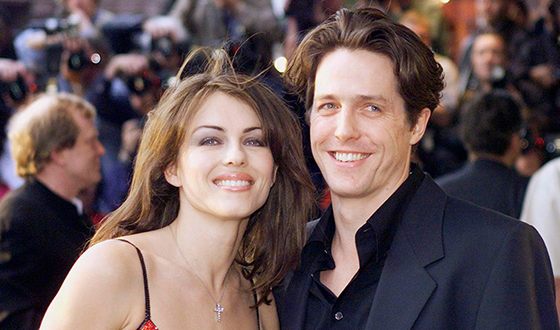 Hugh Grant and Elizabeth Hurley
There were not only fleeting romances in his life, but there were also quite long-lasting relationships. It is known that the civil marriage with actress Elizabeth Hurley lasted 13 years. And though their life together simply gushed with violent quarrels and scandals, they parted quite peacefully and remained in good relations. Hugh even baptized Elizabeth’s son. He also founded a production company with her, the Simian Films. 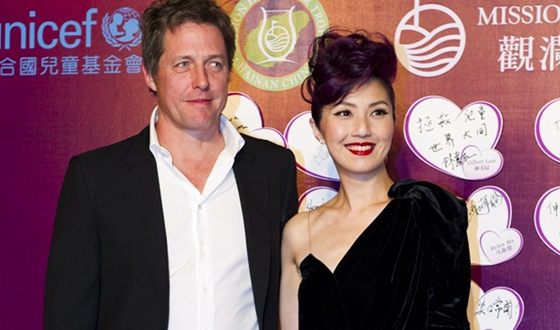 Hugh Grant and Tinglan Hong
With his next passion, the heiress of billions Jemima Khan, Hugh was even engaged, but the marriage didn’t follow, Jemima didn’t forgive him treason. The next passion of the actor was a girl from China Tinglan Hong, who gave him two children. But even that fact didn’t make Grant, who was already over 50 at that time, settle down and cope with his lovingness. 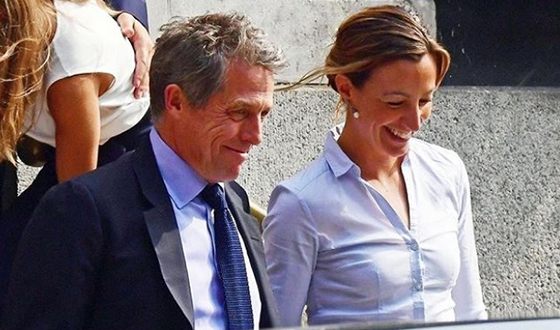 Hugh Grant and Anna Eberstein got married in May 2018
He broke out another affair with the Swede Anna Eberstein in parallel. She bore him three children. And Hugh finally decided to say goodbye to his status as a convinced bachelor. In May 2018 the 57-year-old actor and his chosen Anna were officially married in one of the districts of London. Only close relatives of the newlyweds were invited to the celebration.

Hugh continues his career in cinema. In 2019, Hugh Grant starred in The Gentlemen. The actor's partners in the film were Matthew McConaughey and Colin Farrell. 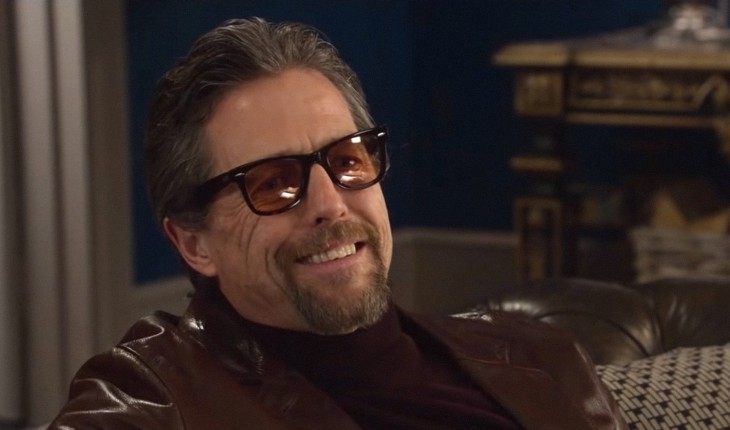 Hugh Grant in «The Gentlemen»