Caitlyn Marie Jenner (birth name William Bruce Jenner) is a television star, who made a resounding coming out in 2015 and won a special sport-oriented Arthur Ashe Courage Award; he is a former athlete and 1976 Olympics gold medal winner in the decathlon, father of supermodels Kendall and Kylie and Kourtney, Kim and Khloe Kardashian’s ex-stepfather. 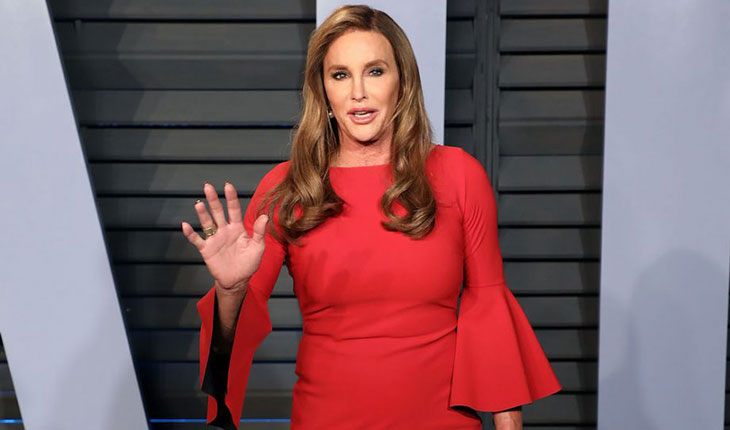 Former athlete and television star Caitlyn Jenner
By changing gender, Bruce-Caitlyn became one of the most famous representatives of the transgender community and the head of a charity foundation that provides assistance to transgender people.

Opinions of people on this act of the athlete were divided. Some regarded it as a bold and worthy of respect decision, others as a win-win way to become famous and get into showbiz.

The future celebrity was born October 28, 1949, in the town of Mount Kisco, located 37 miles from New York. His father, William Hugh, was an arborist; the mother, Esther Ruth, was a housewife. Besides Bruce, there were three more children in their family: the younger son Burt (later killed in a car accident) and the daughters Pam and Lisa. 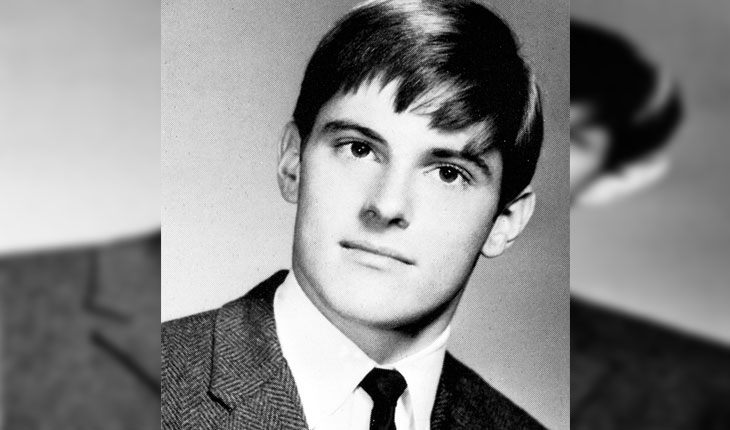 Bruce Jenner in his youth
During his school years, the boy suffered from dyslexia, which had a bad effect on his academic performance. But he succeeded in sports, showing excellent results in basketball, football, athletics (he was the state champion in high jump). He attended high school in Newtown, Connecticut, where the family moved.

After graduating from school in 1968, Bruce received a football scholarship and continued his education at Graceland College in Iowa, where he successfully practiced his favorite sport. However, in the end, he became not a football player, but an athlete, since in the very first year of his studies he got a knee injury and, on the advice of the coach, he took up decathlon after his recovery. 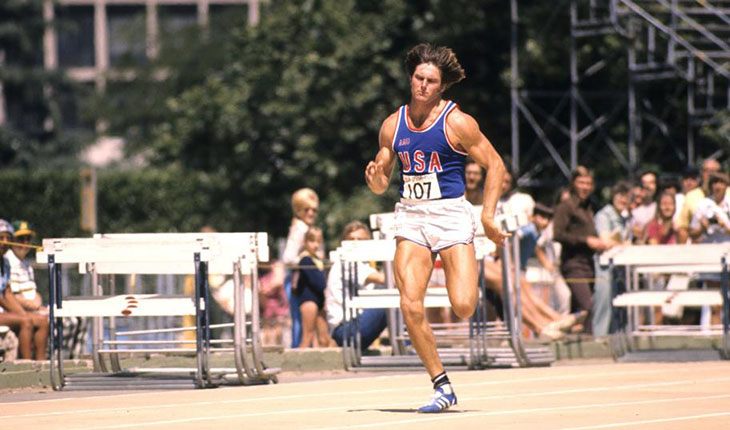 Bruce Jenner went in for athletics
In 1970, Jenner finished sixth in his first competition in Des Moines, Iowa. A year later, in Lemoyne, Pennsylvania, he was able to take the highest step of the podium. In 1972, he successfully passed the selection, was included in the country’s Olympic team, and was able to enter the top ten during the Games in Munich.

Olympiad and other achievements

In 1973, Bruce received the diploma and moved to California, where, simultaneously with his work in an insurance company, he began to intensively prepare for the next Games. Every day he devoted to workouts 6-8 hours. As a result, a year later he was able to become the winner of the national tournament, and in 1975, he won the French Championship and became a record holder in Eugene, Oregon.

Then, during 1976, he first transcended his own result in competitions in the United States, and then became the Olympics triumphant in Canadian Montreal, once again updating his record achievement. In addition, on points, he beat the German silver medalist Guido Kretschmer by 207 points. 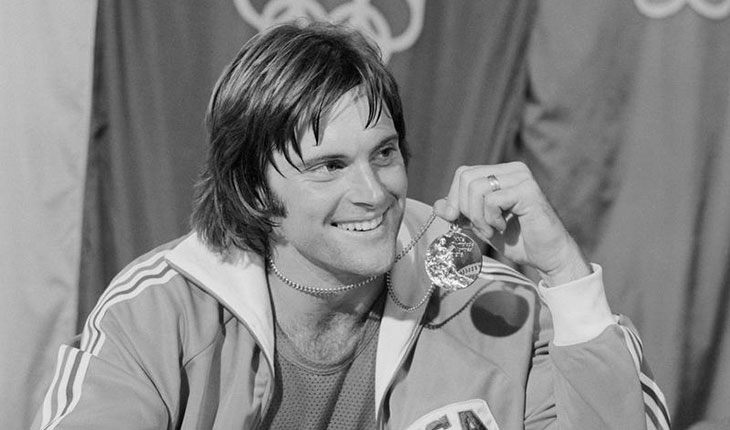 In 1976, Bruce Jenner became an Olympic champion
Thanks to his record-breaking victory, the 27-year-old champion became a true national hero. He left the big sport, enjoying the glory, and as it turned out later, at that time he already dreamed of becoming a woman. He was a frequent visitor to fashionable parties, co-host of the Wide World of Sports program, became the winner of the Athlete of the Year title from the largest international news agency Associated Press, and the winner of James E. Sullivan Award, Oscar’s equivalent among sports awards.

In 1976, he sparkled on the cover of Sports Illustrated, a year later he became the “face” of the Wheaties breakfast cereal brand. Then he acquired an aircraft and created his own airline, Bruce Jenner Aviation. In addition, he was inducted into the United States National Track and Field Hall of Fame and also wrote several books. 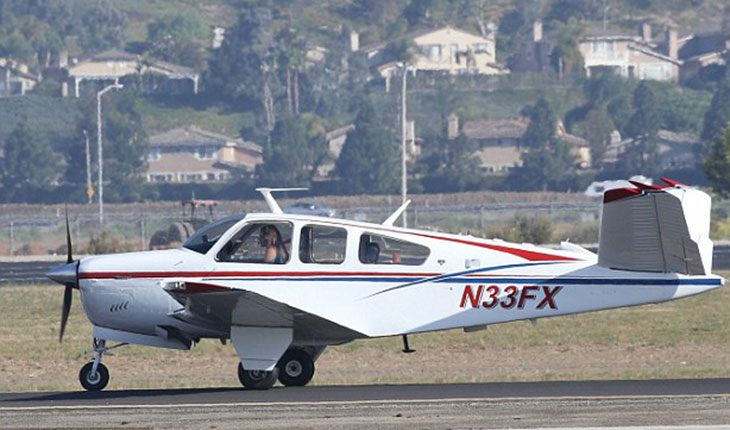 Bruce Jenner founded his own airline
In 1980, he debuted on the big screen in the musical comedy ″Can’t Stop the Music″. The film, the main characters of which were the members of the Village People group, failed at the box office and became the very first to win the Golden Raspberry anti-award. In the same year, he tried his hand as a racing driver. Later, participating in the series of races of the International Motor Sports Association, he showed very good results. For example, at the 1986 IMSA GT Championship, along with Scott Pruett, he finished the second.

In the period from 1981 to 1982 fans could see their idol in the action-comedy ″CHiPs″ as the police officer Steve McLeish. In 1992, he starred with Candy Clark, Kris Kristofferson, Ash Adams, and Martin Sheen in the drama film ″Original Intent″. He was entrusted small roles in the television series ″Gym Teacher″, ″Silver Spoons″, and in the short film ″Dirty Tennis″. 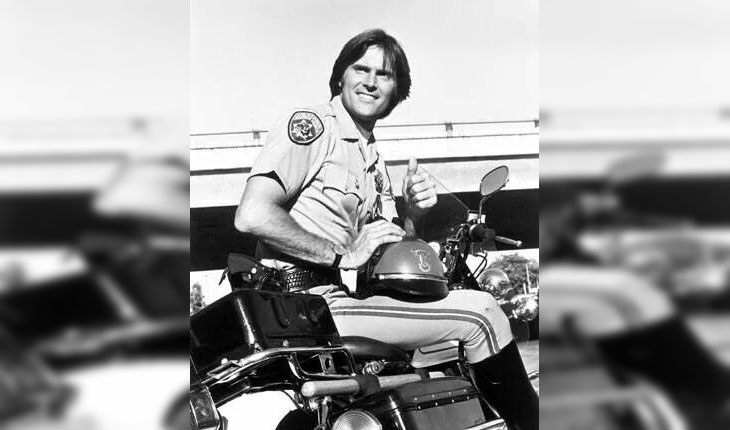 Bruce Jenner in the television series ″CHiPs″
Bruce also appeared on a variety of entertainment TV shows, including Sean Hannity Show, the Bonnie Hunt Show, the TV game show The Weakest Link, and I'm a Celebrity ... Get Me Out of Here! In 2006, he was a participant in the ice show Skating with Celebrities (in pair with a figure skater, world champion Tai Babilonia), was an invited judge at the Pet Star program, dedicated to competitions between pets (he evaluated the performance of various tricks at the command of pet owners).

In 2007, Bruce Jenner became the hero of the TV show Keeping Up with the Kardashians along with her daughters Kylie and Kendall, his wife Kris, and her four children. 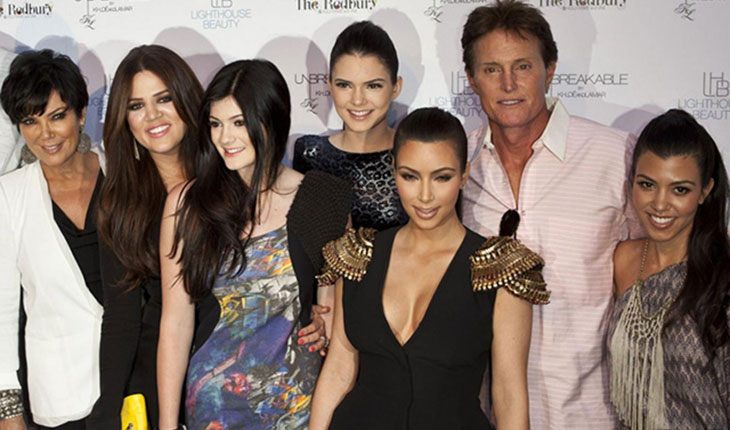 Bruce Jenner and the Kardashian family
In 2011, he was lucky to play in a scene with Al Pacino in the comedy ″Jack and Jill″. But, like the debut picture ″Can’t Stop the Music″, the film did not have commercial success.

In 2015, during the “20/20” show on ABC, the 65-year-old former decathlete and Olympic champion struck the public by announcing his gender identity change. He emphasized the fact that he was happy to finally become himself. Soon he appeared on the Vanity Fair’s cover in an elegant image, said that his new name was Caitlyn, emphasized the importance of “accepting people as they are” and assured that the decision to change the gender was nothing but his inner need, and was not due to the desire to attract attention or become famous. At the same time, he noted that he was always sexually attracted not by men, but by women. 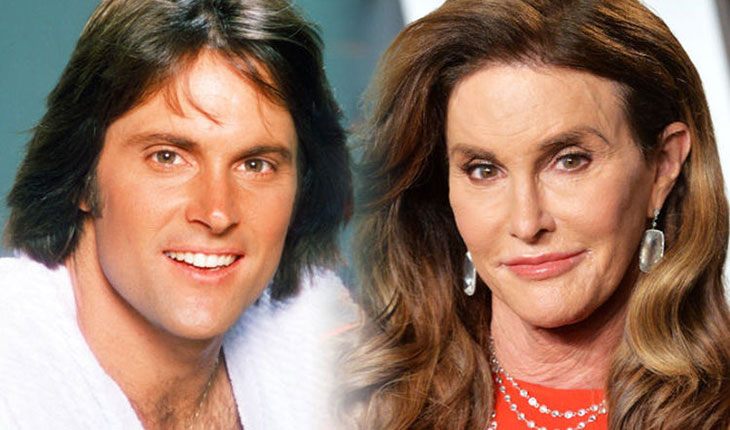 Caitlyn Jenner before and after the change
In just 4 hours, more than one million users subscribed to the Twitter page of the new lady. Thus, Cait broke another world record: the record number of subscribers in a record time that previously belonged to Barack Obama (the president got a million followers in 4 hours and 3 minutes). 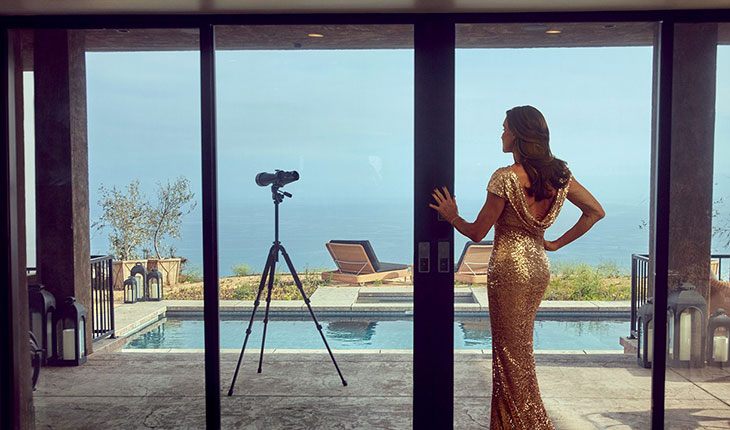 Caitlyn Jenner’s height is 188 cm
Many celebrities expressed their admiration and support for the bold act: a member of the Kennedy family, publicist and journalist Maria Shriver, actress and singer Emmy Rossum, political activist Kerry Washington, actor, and singer Grant Gustin, actress and Frank Sinatra’s ex-spouse Mia Farrow, supermodel Gigi Hadid and all members of the Kardashian-Jenner clan. In the same year, she appeared in the reality show I am Cait, dedicated to changing gender status, turned out to be a happy winner of the prestigious sports award ESPY Awards for courage, and Glamour magazine called her Woman of the Year.
Caitlyn Jenner was given the courage award for changing gender
In 2016, she appeared in the television series ″Transparent″, again became the adornment of the Sports Illustrated magazine cover and the heroine of a magazine story dedicated to the fortieth anniversary of the victory at the Olympic Games. She also took part in the advertising campaign “For every victory” for H&M Sport’s new fashion collection, and she was chosen as the “face” of this sports brand. A year later, together with the Makeup Art Cosmetics brand, she launched the M.A.C Caitlyn Jenner line that included eight different makeup products.

As Bruce, the current successful and wealthy Caitlyn had three official wives. The first chosen one of the former athletes was Chrystie Scott. They married in 1972, while they were studying in college. During the ten years of joint life, they had two children: a son, Burt, named after Jenner’s brother who was killed in a car accident, and a daughter, Cassandra. 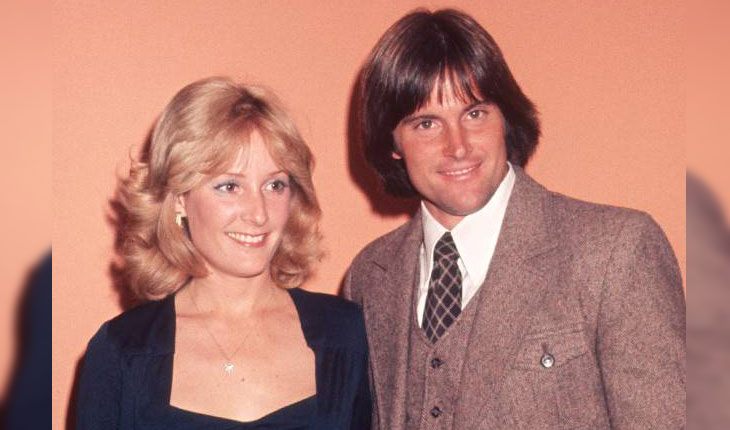 Bruce Jenner and his first wife, Chrystie
In 1981, they broke up, and the 32-year-old athlete tied himself with the bonds of Hymen with Elvis Presley’s ex-girlfriend, actress Linda Thompson. Their wedding ceremony took place to the sound of the wedding song by the “King of Rock and Roll” in Hawaii. The couple had two sons Brandon and Brody. But one day the head of the family screw up his courage and told his wife about his “problem”, which broke her heart, and they divorced. 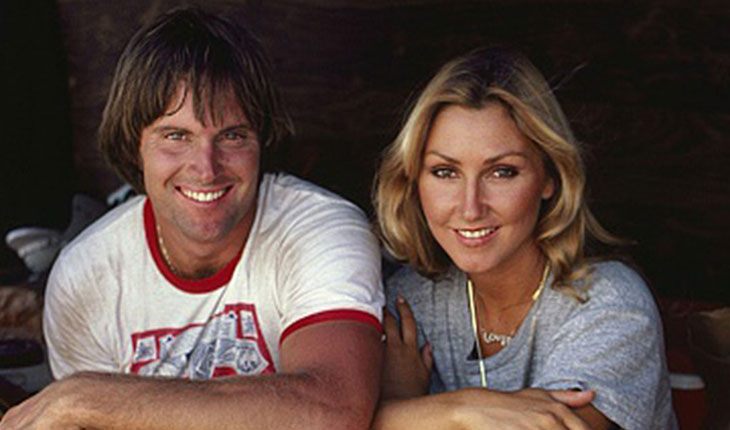 Bruce Jenner and his wife Linda Thompson
In 1991, Kris Kardashian became Bruce’s third wife, who gave her love, energy and daughters – Kendall and Kylie. In 2015, they broke up. 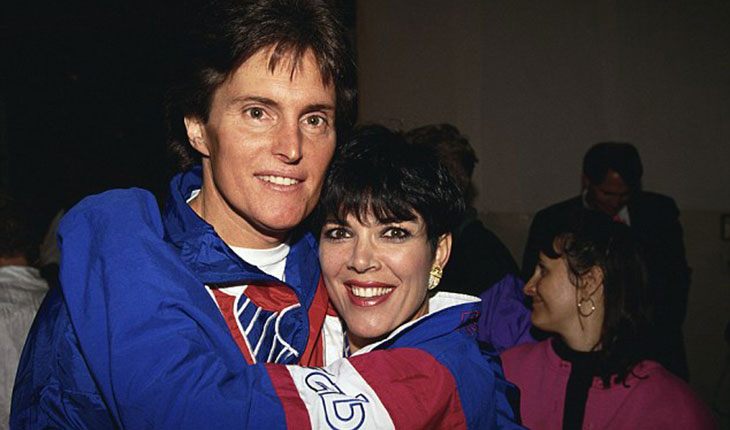 Bruce Jenner and Kris Kardashian
In 2017, information appeared about the wedding of 68-year-old Cait and 21-year-old transgender model Sophia Hutchins (formerly known as Scott Hutchins). Both transgender women confirm that they have become inseparable. But they declare that their relationship cannot be called romantic, they allegedly have purely friendly relations. 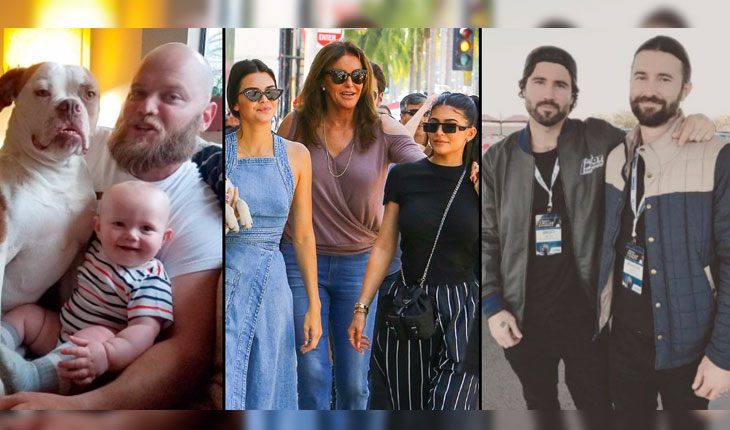 Caitlyn Jenner’s children
Nevertheless, in 2019, journalists continue to exaggerate information about the upcoming secret wedding ceremony of these transgender people. According to rumors, in the near future, Jenner is also going to become a mother, having resorted to the services of a surrogate mother.

The celebrity continues to lead the charitable foundation in her name, working to improve the lives of transgender people, defending their rights, promoting their employment, fighting malicious insults, speaking for the prevention of suicide, and promoting the equality of all genders.
Now Caitlyn Jenner understands women
Together with her daughter, she shone on the red carpet of the 2019 Oscars after-party, organized by Vanity Fair magazine. Moreover, their appearance was called the main thrash moment of the festival by a number of media. The point is that, unlike her mother, her beautiful daughter showed off in the spotlight in an incredibly open dress, which left almost the entire lower half of her body open. 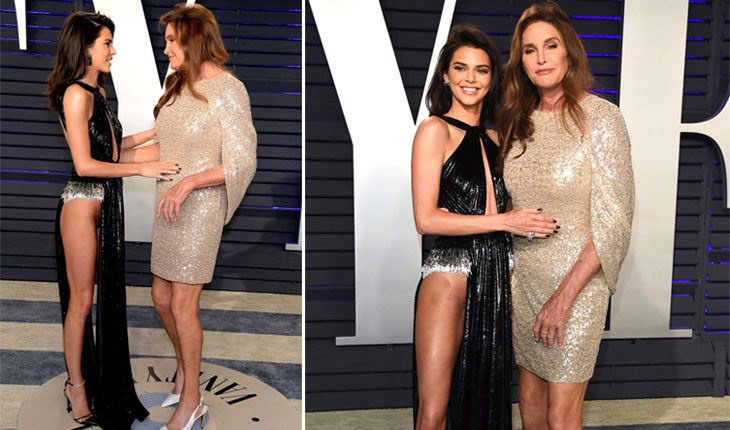 Caitlyn Jenner and her daughter at the Academy Awards
In the summer of 2020, when Kanye West was planning to run for president of the United States, Caitlin expressed her desire to become vice president, and, according to TMZ, immediately proposed her candidacy to her son-in-law. Later, Kanye left the election race, so Caitlin simply did not have a chance to try herself in public office. In the same year, Caitlin wrote an essay for Women's Health magazine, in which she described in detail how she lives after the transgender transition. According to the woman, she was especially concerned about gender dysphoria during preparations for the Olympics, when her body and mind were subjected to serious stress. 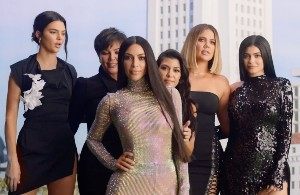 One of its main participants, Kim Kardashian, spoke about the end of the show after season 20 on her Instagram.

Idris Elba in his youth
5.9

Karen Gillan how old is she
5.8