Ed Sheeran is an English singer and songwriter, the winner of Grammy, famous for hits «Thinking Out Loud», «Photograph», «Shape of You» and «Perfect». It is a lyrical and charming performer, and millions of listeners around the world, have fallen in love with his songs. His albums with exclusive titles in the form of signs of mathematical operations of addition, multiplication, and division are «+», «x» and «÷» – at various times headed the national hit parade of the UK Albums Chart. The last-mentioned disk in 2017 also became the first in the prestigious Billboard 200 chart and in the charts of Canada, Germany, Italy, and Sweden.

The future singer was born on February 7, 1991, in the English city of Halifax in the county of West Yorkshire. His parents, John and Imogen Sheeran were art consultants and natives of London. Soon after his birth, the family including little Ed and his older brother Matthew moved to Framlingham, Suffolk. Matthew, like Ed, subsequently devoted himself to music and became a composer of the classical instrumental genre. Grandfather and grandmother on his father's side were Irish, perhaps that from them he inherited his bright red hair. Love for singing and music with the boy showed up at a very early age: when he was four he already sang in the Church choir. Then he learned to play the guitar and while attending Thomas Mills High School began to write songs. On weekends, parents often took children to the concerts of famous artists, visiting of which was part of their official duties. The singer recalled that in childhood he was particularly impressed with the concert of a legend of rock music Eric Clapton at the Royal Albert Hall, chamber performance of Damien Rice in Ireland, a fantastic show of Paul McCartney in Birmingham, as well as concerts of Bob Dylan and Eminem.

As a teenager, Ed moved to London to take up creative work. He improved his performing talent at the National Youth Theater, where he was accepted as a teenager, gave hundreds of concerts on small amateur sites and was famous for his numerous online performances. In 14 years old tireless musician proceeded to release several mini albums, so-called EP. In particular, in 2005 he released his first mini-album «The Orange Room».

In 2008, in the life of a 17-year-old artist, two significant events were occurred: he performed as a guitarist on tour with his idols, alternative band Nizlopi, and became a student at the Academy of Contemporary Music in Guildford.
ed Sheeran – "All My Life" (acoustic cover of Nizlopi)
During his studies, he played over three hundred concerts, performed along with the musician Just Jack, sang a few songs with Ledray Chapman and rapper Example, and also released a mini-album «Loose Change». In 2010, he went to conquer the USA with no contract, no suggestions, just by buying a ticket to Los Angeles. He promoted his work speaking at different city venues. Capable and motivated young man attracted the attention of Oscar-winning Jamie Foxx. The actor was so impressed with Ed's, that he invited him first to his radio show «The Foxxhole» and then to his home recording studio. Meanwhile, the army of fans of the singer has increased significantly, and Atlantic Records offered him a lucrative contract. After this, Ed began work on his first full-length CD, «+», which was ready by September 2011.

Since the release debut CD received platinum status in the UK for seven times (awarded after selling more than 300 thousand copies). His lead single «The A-Team» became a worldwide hit and brought the singer Ivor Novello award which is the statuette of the muse of the poetry Evterpa. He wrote this ballad about a prostitute who got addicted to crack being under the impression from visiting a shelter for the homeless once.
Ed Sheeran – The A Team
In 2012, the singer performed at the closing ceremony of the Olympics in the capital of the United Kingdom. As part of a group of performers he sang a song «Wish You Were Here» by the legendary Pink Floyd. In 2013, his «The A-Team» was nominated for a Grammy in the category «Song of the year», but lost to «We Are Young» by American indie-band Fun. During the awards, Ed performed his hit with Elton John. The offer to sing a duet came from the iconic rock singer-songwriter that was just a real surprise for Sheeran. While working on his next studio album Ed Sheeran collaborated with many famous musicians. So, he participated in concerts of Snow Patrol as part of their North American tour, also performed in Passenger tour, The Rolling Stones and pop-star Taylor Swift. For the latter he wrote the track «Everything Has Changed». Then he participated in the writing of the song «Little Things» of the boys band One Direction recorded the song «I See Fire», which became the soundtrack to the film by Peter Jackson «The Hobbit: Heath Smaug», as well as the song «Sing» with Farrell Williams. In addition, he gave three grandiose concerts in the sports complex of New York’s Madison Square Garden, tickets for which were sold just in a moment.

In June 2014, a new album «x» was presented to the listeners. Ed Sheeran had shaken again the music world and reached the first place in the Billboard 200 and received the Brit Award and a new award from BBC Music. Shortly thereafter, in the Madame Tussauds Museum in New York, there was made a wax figure of the popular singer. He made a tour in support of the disc, which started in Japan, continued in Europe, the United States, Asia and ended in 2015 in New Zealand. As part of the tour, there were three large-scale performances by the artist at London's Wembley, which were sold out.

In 2016, the single from the second CD «Thinking Out Loud» brought victory to Ed in two categories for Grammy Awards. His video on the first day after the release received over two and a half million views on YouTube, subsequently, the number of audiences exceeded one billion.
Ed Sheeran – Thinking out Loud
After the tour, Sheeran announced his decision to suspend his eventful career for a while. In 2014 successful artist appeared in a cameo in the television series «Shortland Street», «Home and way», «Unfit for Dating». In addition, he starred in the historical drama «The Executioner-bastard».

The musician, whose popularity is comparable to Adele and Taylor Swift, not married. While studying at the school he was dating his classmate for four years, but busy music career did not allow him to concentrate on his personal life. As it turned out, the singer, who considers himself as a clumsy fat man, never felt confident in relations with the beautiful women. The press, however, is aware of his three romances.

At the dawn of his career, he dates Scottish model and singer Nina Nesbitt, which inspired him to create the songs like «Nina», «Photograph» and «Friends». It is assumed that he also dedicated his first studio album «+» to her. In turn, Nina's album «Peroxide» is largely dedicated to Ed. From 2014 to 2015, Ed Sheeran dated the Greek Athina Andrelos that inspired him to create the hit «Thinking Out Loud». During the creative pause, Ed had another lover, a hockey player Cherry Seaborn. They were familiar with each other from school days, but in 2015 their relationship moved to a higher level. He dedicated the song «Perfect», included in the third album to his lady. At January, 2018, they got engaged. A young man is distinguished by a combination of rare talent, exceptional diligence, and extraordinary charm. Because of this he has a lot of fans and many star friends. Among them is Harry Styles, for whom he made on the arm tattoo in the form of a lock by himself, the famous Taylor Swift, in memory of the concerts with her he made a tattoo of «RED» (the title of the one of her albums). Among his friends there is also Irish musician Foy Vance, who accompanied him during the tour and appearing at the opening act, and actor Rupert Grint, best known for playing Ron in the movies about Harry Potter and starring in the clip of Sheeran's song «Lego House». Ed's favorite dish is chicken in Portuguese, and his favorite rapper – Kendrick Lamar.

In collaboration with childhood friend Philip Booth, the singer wrote and published an autobiographical book «A Visual Journey», which can be not only interesting but also useful for beginning musicians.

All four guitars of artist have their own names. It's Cyril, Felix, Lloyd, and Nigel.

In 2016 Ed Sheeran came back to music, and in January 2017 the single «Shape of You», included in the third CD of the singer «÷», had a resounding success. It became the leader of the U.S. Billboard Hot 100 chart and won first place in sales in the homeland of the singer and in the United States. It was noted in the reviewa that this song is quite different from his previous works, as it is more impressive and moving. It is interesting that Sheeran firstly composed it for Rihanna, but later decided to perform it himself.
Ed Sheeran – Shape of You
In the same period, his two songs «Shape of You» and «Castle on the Hill» took first and second place respectively in the UK Singles Chart. Thus, for the first time in the country's history, the works of the same author were on the top of the UK chart.

The CD «÷», released in March, again became the #1 list of the most popular music in the US, Canada, Italy, Germany and other countries. In Britain about 670 thousand copies of the album had already been sold in the first week. The better sales result was shown previously only by Adele with her «25» (800 thousand) and Oasis with «Be Here Now» (700 thousand). The Ed's album twice became platinum in Australia and in the United Kingdom. As it became known, the singer was invited to play in the next season of the fantasy series «Game of Thrones». Maisie Williams who is known as Arya Stark there, is a big fan of Ed so she could have convinced producers to use his music in the series.
Ed Sheeran in Game of Thrones
At 2018 Grammy’s a peculiar incident happened: Ed Sheeran who had a few nominations and finally got two awards for «The best pop-album» and «The best pop-solo performance» (Shape of you) just didn’t come to the show. Later he admitted that he’d been just sleeping during the ceremony and had learned about his Grammys in the news the next day.
ZoomBoola.com

Ed Sheeran made his neighbors angry 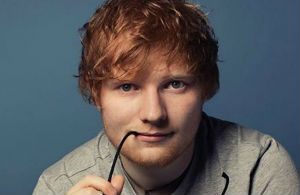 Ed Sheeran angered his neighbors by using a common pond to relax with his friends.
2
96
Read more
Life stories