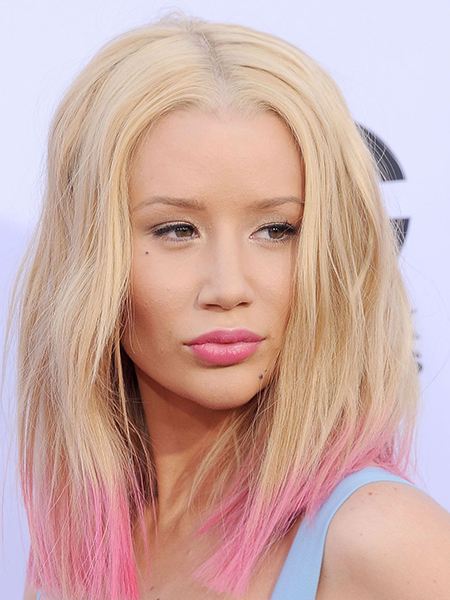 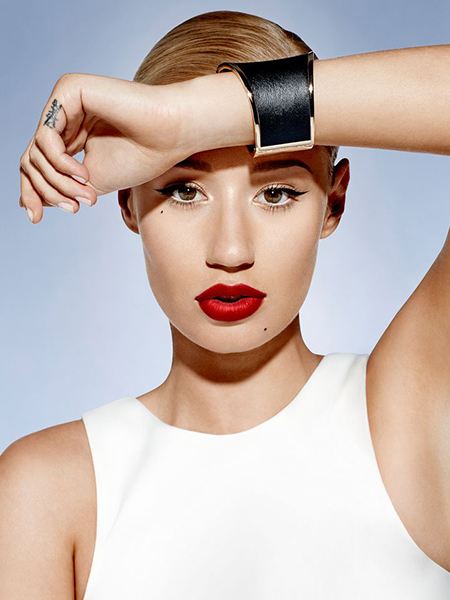 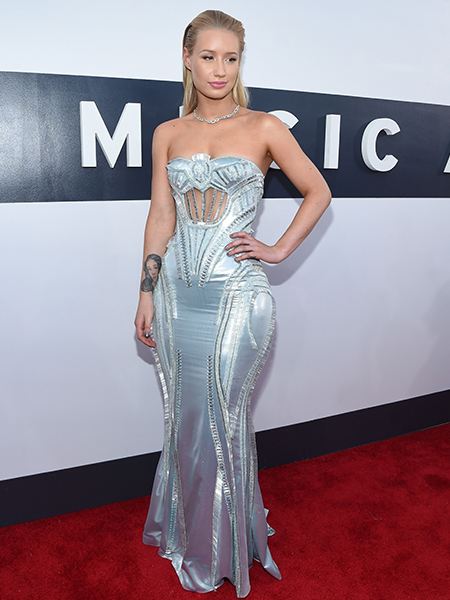 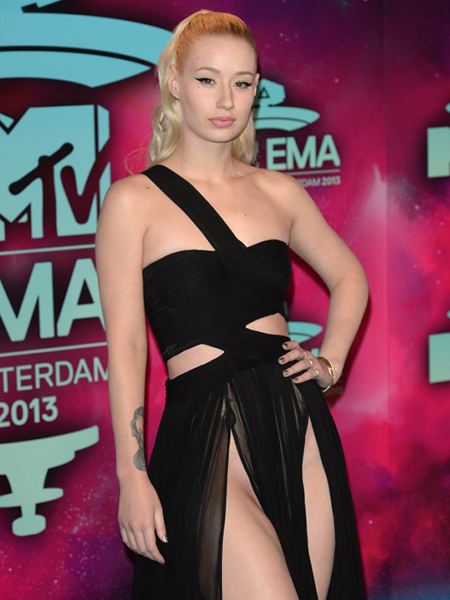 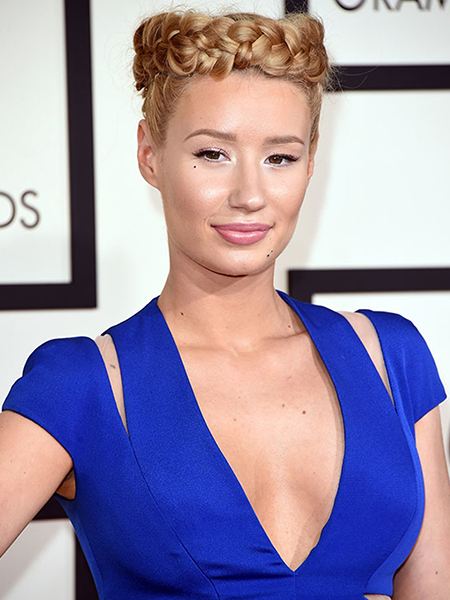 Blond Iggy Azalea is called a rap princess. The Australian girl repeated the record set by the legendary The Beatles (only The Liverpool 4 and Azalea managed to simultaneously occupy the first two lines of the Billboard Hot 100), and Forbes included her name in the list of the most influential musicians along with the masters of rap such as Snoop Dogg and Jay-Z. Has a $10 million estimated net worth. 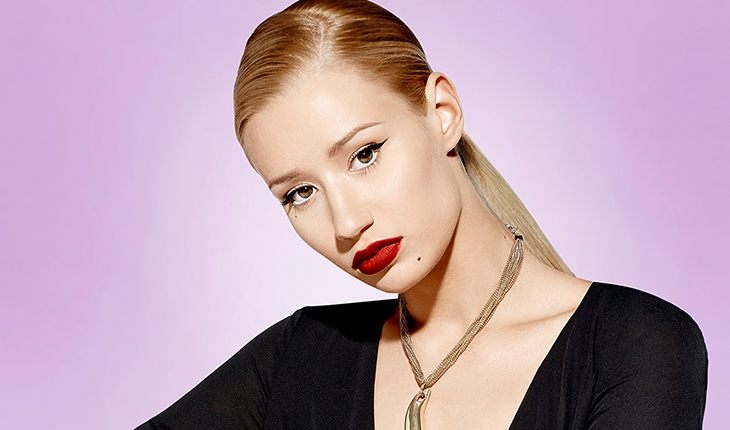 In the photo: Iggy Azalea

The rap princess was born on July 7, 1990 in Sydney, but grew up in a small but picturesque town of Mullumbimby, the population of which does not exceed 3,000 people. 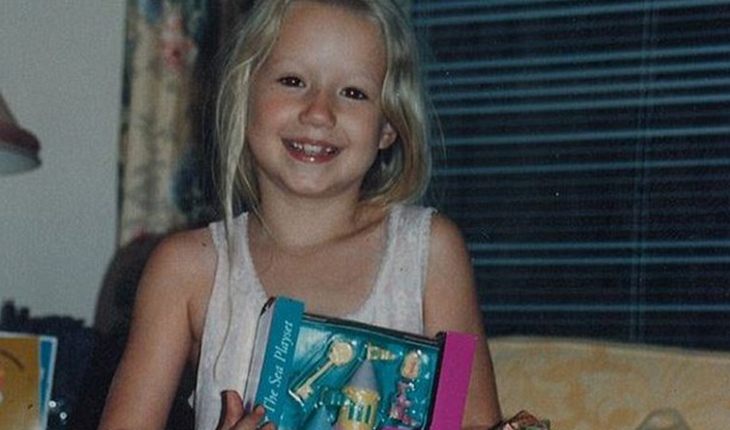 Iggy Azalea in childhood
At birth, the girl got the name Amethyst Amelia Kelly. Her father, Brendan, was a painter and illustrator of children’s books, and her mother, Tanya, cleaned rooms in a small hotel. She has some native Australian people's blood.

The Kelly family owned a plot of land on which Brendan built a house himself where he thought his grandchildren would live, but the man’s dream was not destined to come true, since staying in Mullumbimby was not included in his daughter’s plans. In 2001, the girl first visited America with her grandparents. After visiting Los Angeles and Las Vegas, life in her native provincial town no longer seemed attractive to her. 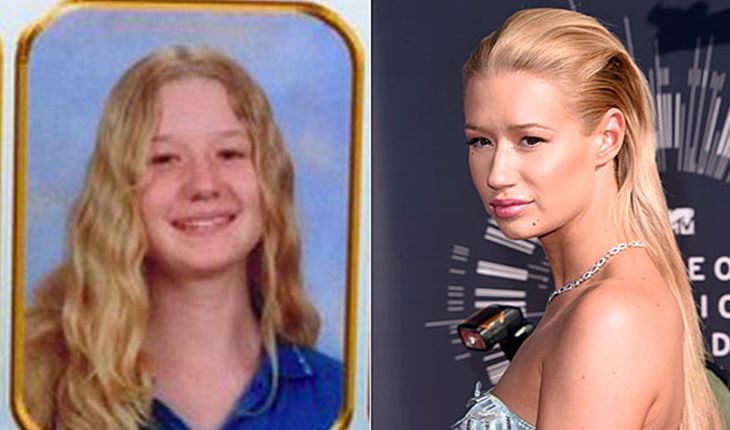 Iggy Azalea in her school years and now
The point was not only a lack of entertainments and any intelligible prospects. The girl, who did not look like others, was hounded by schoolmates. At the age of 13, Amethyst became carried away by hip-hop, finding a safety valve in this genre. Tupac and Missy Elliott became her idols, and the girl also listened to TLC, trying to imitate the recently died Lisa Lopez. Amethyst founded a group with her several friends, but the girls did not want to make music seriously and took rap as entertainment. The girl tried to find an Australian hip-hop label that would be interested in her work, but in vain.
73 questions with Iggy Azalea
Then Amethyst began to look for a like-minded person on the Internet and found a guy from the United States named Derek who was keen on hip hop like she was. The girl sent his first records to Derek, considering him to be her only friend. Shortly before her sixteenth birthday, Amethyst had planned a trip to Florida and began to save money, cleaning up at the same hotel where her mother worked after classes. The future star told her parents that she was going only for two weeks, and Brendan and Tanya let their daughter go with a light heart. 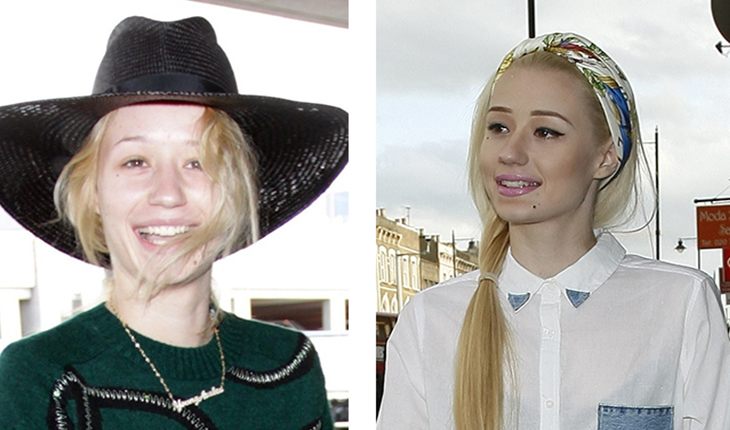 At the age of 16, Iggy moved independently to America
Derek met his Australian friend at Miami airport, where she arrived on July 4, 2006. The very next day, Amethyst called her parents to tell them that she would not return. Brendan and Tanya realized that her daughter had serious intentions and asked her only about one thing – to be careful.

I knew one thing: I wanted to move to America and become a rapper with a horsetail hairstyle and in a leopard jacket, lowered to legs, with 20 fluffy snow-white dogs on a leash.

This period of Iggy Azalea’s life was full of contradictions. According to scrap data from various interviews, Amethyst lived with Derek for about a year, but soon broke up with him. Then her creative works, laid out on the social network MySpace, were heard by a producer, a certain Mr. Lee. To work with him in the studio, the beginner rap artist moved to Houston, Texas. 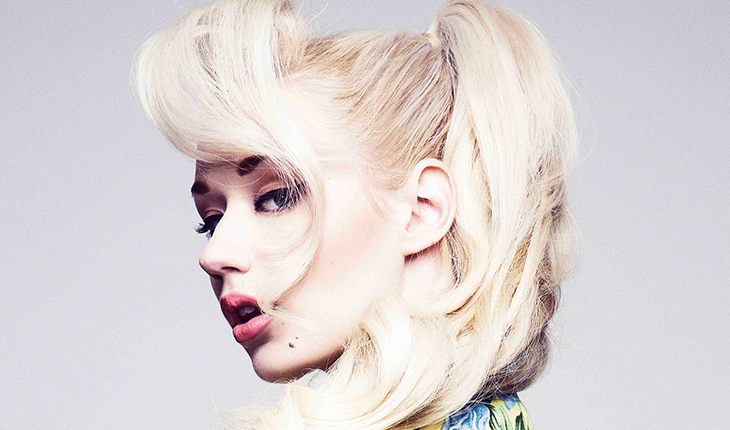 Iggy’s early career was full of contradictions
In 2008, Houston was seriously under threat due to Hurricane Ike, and Iggy moved to Atlanta, where she and her friend took up the hairdressing business. At the same time, there was a global financial crisis, and the Australian dollar depreciated, as a result of which the financial support from parents almost dried up. She almost got a contract with a major producer center, but the future rap star did not like being demanded to “forget about Iggy and add more Britney”, so she had to refuse the cooperation.

After that, the girl settled in Los Angeles, wherein in the fall of 2011 she released the first mixtape called ″Ignorant Art″, striking with its impudent and deliberately gross sound. The mixtape was preceded by a clip for the song Pussy.
Iggy Azalea – PU$$Y
As a pseudonym, the young artist began to use the name Iggy Azalea, according to one of the versions, derived from the name of her dog and the street where she lived in her native Mullumbimby.

In 2012, Iggy was included in the list of The XXL 2012 Freshman Class hip-hop edition, decorating its cover with her photo. Iggy became the first white woman who appeared on the list of freshers. The publication caused a tempestuous reaction in the hip-hop community, which, as you know, is extremely conservative and especially suspicious of strangers and women. 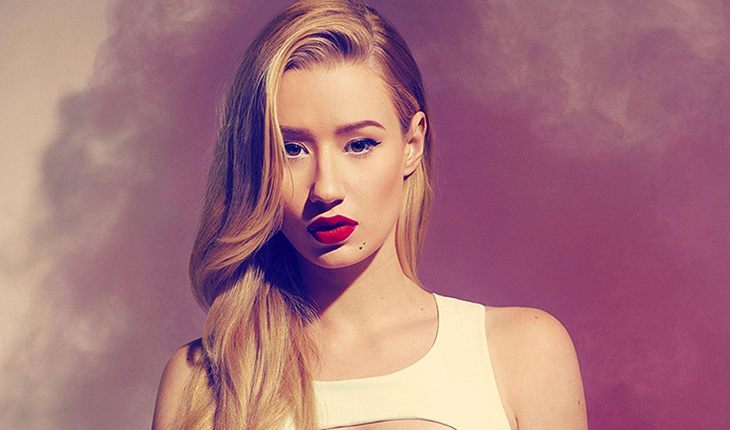 Iggy’s popularity grew day by day
Iggy's name unwittingly suggested associations with Azalea Banks, a black rap singer, and Banks didn’t fail to take the opportunity to speak out, calling for fans of rap music not to support “this white woman who dared to call herself a fugitive master of slaves”. Banks pulled out of the context the lines from the track DRUGS, blowing up a scandal and obviously accusing Iggy of racism, which, of course, led to an even greater growth of interest in the latter. Iggy replied to Banks that she was making her way with her talent, and not with skin color as Banks did.

A little later, Iggy will make a noble gesture and apologize for her statements and for the track DRUGS, and will even call it tasteless, and later she will accuse black performers of racism and infringement of rights of white people.

At the end of 2012, the Australian girl signed a contract with Wilhelmina Models Int. and became the face of the brand Levi Strauss, and also succeeded in obtaining a residence permit.

IAccording to Zoomboola.com, in early 2013, Iggy announced her plans to release a full-fledged debut album and turned to Clifford Harris Jr., known as T.I., a musician and producer, the owner of Grand Hustle Records. And although the singer did not conclude a contract with the independent label, T.I. gave her invaluable support in the promotion. 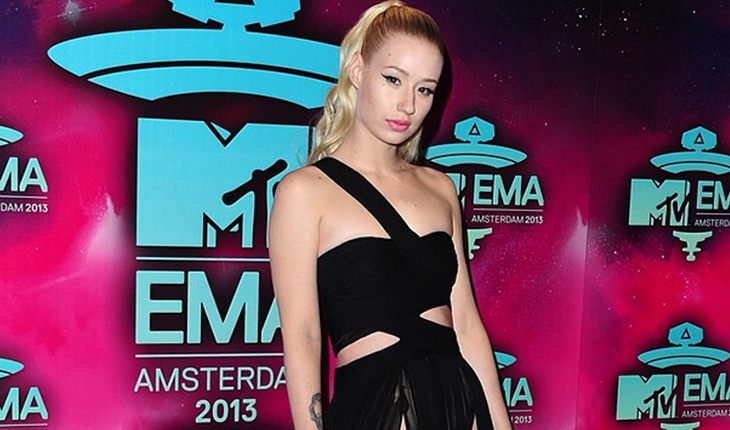 Iggy Azalea in 2013
During the preparation for the release of the album, Iggy recorded videos for Murda Bizness, Millionaire Misfits, My Times, and other songs, opened Rita Ora’s performances during her America and Britain “radioactive” tour. In 2013, Iggy performed at a charity show in London where Jennifer Lopez and Beyoncé participated. She joined the world tour during her “Australian” stage, as well as toured with rapper Nas.

The long-awaited album ″The New Classic″ was released in April 2014 and immediately became a sensation, promoting Iggy to the rank of rap idols: the girl became the fourth female rapper who had ever entered the top five of Hot 100 leaders, and the first white female rapper who achieved such success. The record beat the sales record set by Nicki Minaj, and the famous track Fancy stood out beautifully in the first place on the charts both in America and in other countries. 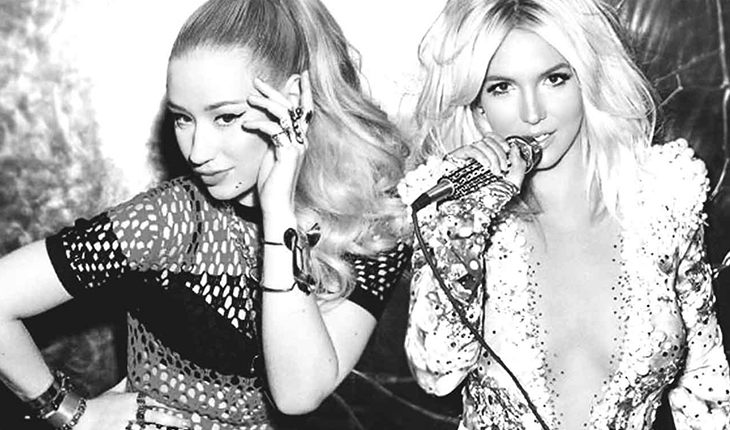 Iggy Azalea and Britney Spears
Iggy toured with the album throughout the year. In the spring of 2014, together with J. Lo, she recorded an extremely beautiful and sexy video for the single Booty, and in May 2015, with Britney Spears, she released the song and the video Pretty Girls, created in the exaggerated pop aesthetics of the 80s.
Britney Spears, Iggy Azalea - Pretty Girls
Iggy Azalea triumphantly entered the history of not only the rap scene, but also the world music in general, simultaneously taking both the first and second position on the Billboard Hot 100 with the single Fancy ‒ 1st place, and with the song Problem ‒ 2nd place, which hadn’t happened since 1964, when The Beatles achieved similar success. 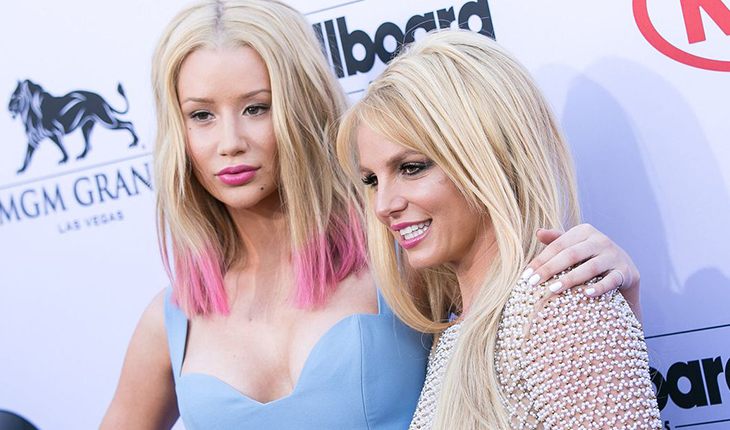 Iggy Azalea and Britney Spears at 2015 Grammy Awards
Iggy began to work on the second album in 2016. ″In My Defense″ was supposed to appear in 2017, but the artist announced that she had to take a break in order to regain strength and decide the concept of the album. For almost three years, the singer was putting her thoughts and affairs in order, searching for a new sound, and released two mini-albums. In 2018, Iggy founded her Island Records label, which was renamed Bad Dreams in January 2019.

Iggy has never hidden that her lover will be only a black man. In her interviews, she has repeatedly said that she does not see a fair-skinned guy next to her. 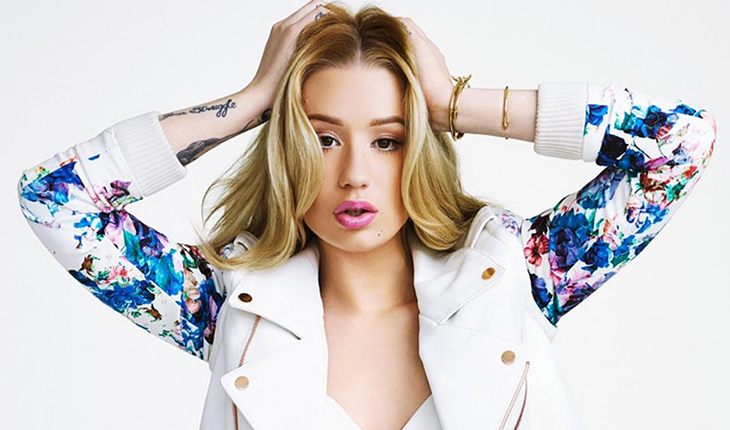 Iggy prefers dark-skinned men
In 2011, Iggy dated rapper A$AP Rocky and even got a tattoo of his name on the knuckles of her fingers, but after parting, she got rid of the romantic reminder.

In 2013, the boyfriend of the rap princess was Nick Young, the Los Angeles Lakers’ star, whom Iggy broke up with after catching him in unfaithfulness in 2016. 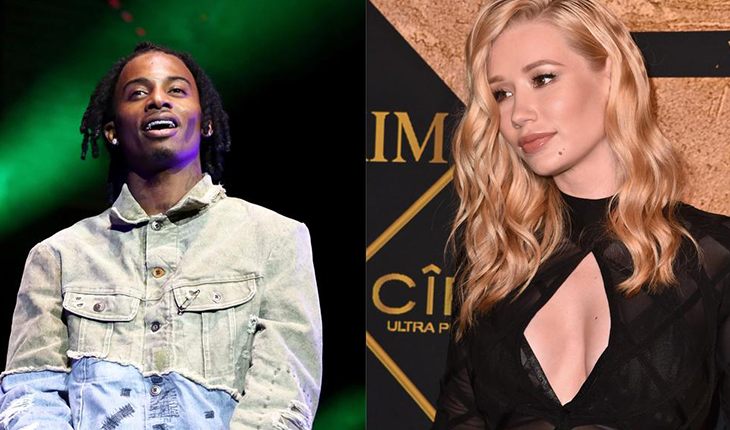 Iggy Azalea and rapper Playboi Carti
At the end of 2018, Azalea and rapper Playboi Carti announced their affairs to fans by posting on social networks. Many fans doubted Iggy and Jordan were serious. But it seems that this is exactly the case: in June 2020, Iggy gave birth to her beloved son. The boy was named Onyx. The singer does not upload the photo of the baby to the net - she has repeatedly said that she does not want to advertise his appearance and violate his right to privacy.

The release of the second album of the blond rap princess, which she called ″In My Defense″, took place in 2019. It is known that the single Sally Walker will become the title track of the album. The song and the video for it appeared on the Internet in March and a week later earned more than 30 million views on YouTube, while the track sales volume for the week amounted to almost 100,000 copies.
Iggy Azalea - Sally Walker (Official Music Video)
After becoming a mom, Iggy Azalea is not going to stop being creative. In August 2020, her new single, "Dance Like Nobody's Watching", was released.
Iggy Azalea - Dance Like Nobody's Watching
It is expected to be included in her third studio album, the title of which is already known - "End of an Era" ("End of an era"). By "the end of an era" Iggy means the coming 30 years.

Irina Shayk where does she live
6.0