The actress Keke Palmer, who played the first role at 11, grew up with her characters. Later, she successfully fulfilled herself in the pop music genre. Keke is familiar to the viewers from the teen comedy Jump In, sitcom True Jackson, VP, and the burlesque horror series Scream Queens. Net worth: $7.5 million. 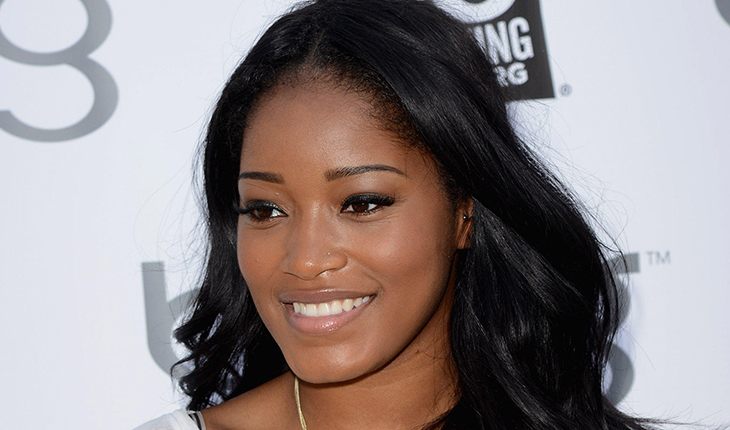 In the photo: Keke Palmer

Lauren Keyana Palmer was born on August 26, 1993, in Harvey, Illinois. The girl grew up in a family of professional actors Larry and Sharon, who met at acting classes. The eldest daughter Loreal was already growing up in the family. In 2001, baby Lawrencia appeared in the family. Besides them, Keke has a brother Lawrence.

Shortly after Keke was born, the family moved to the town of Robbins. Parents decided to give up acting: Larry got a job as a manager in a firm, manufacturing high-strength plastic products, and Sharon became involved in teaching and adapting children with autism. 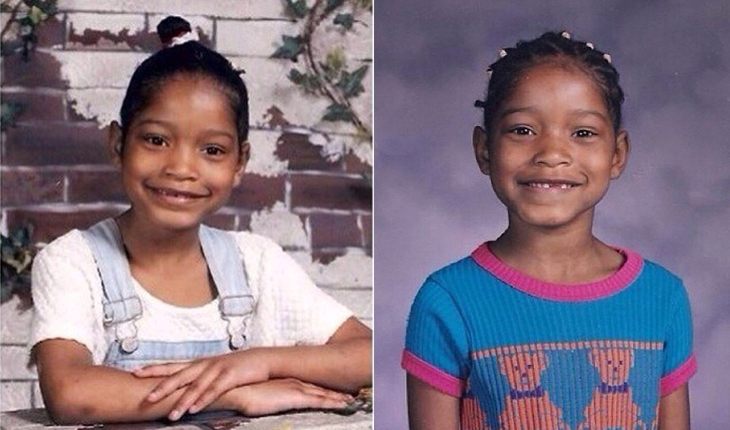 Keke Palmer in childhood
In spite of being busy, the Palmers found time to play in amateur theater productions and inculcated in their daughters a liking for art. In addition, Keke manifested a musical gift at an early age, and at the age of 5, she began to sing at Robbins Church, surprising the parishioners with an excellent voice.

Keke was barely nine when she auditioned for the production of The Lion King. Two years later she played her first movie role. In the sparkling comedy-drama Barbershop 2: Back in Business, the girl played the niece of the character of the rap icon Queen Latifah. 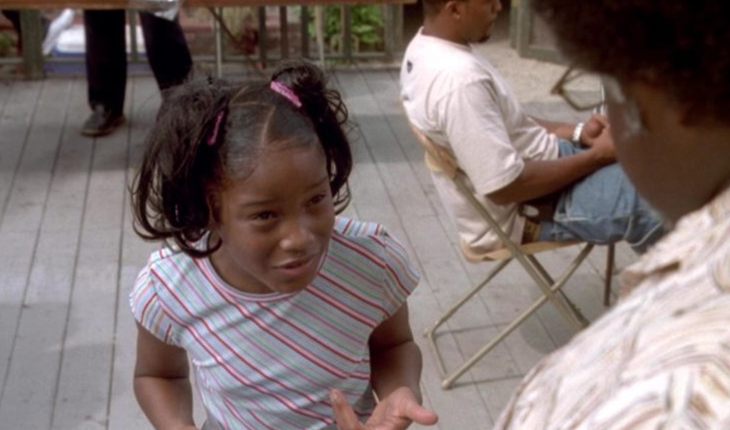 Keke Palmer in the movie Barbershop 2: Back in Business
The success of the daughter induced her parents to dare to move to Los Angeles, where little Keke was able to continue her career. In Los Angeles, the girl went to school, worked with acting and vocal teachers, and in 2005, her parents signed an agreement on her behalf with Atlantic Records.

Keke’s debut song All My Girlz sounded in the family drama Akeelah and the Bee, in which she played the lead role, performing a talented girl who dreamt of winning the Spelling Bee grammar competition. Angela Bassett and Lawrence Fishburne, Keke’s partners on the set, noted the girl’s extraordinary talent, as well as her “adult” work performance and childlike spontaneity.
Keke Palmer ‒ All My Girlz
In 2006, Keke played in the drama Medea’s Family Reunion, which confirmed the rise of the little but bright star. From 2007 to 2009, Keke appeared in many films. Among the works of this period the following films stand out: the thriller Cleaner with great Samuel L. Jackson, the sports teen comedy Jump In, where Keke played duo with Corbin Blue, and the drama The Longshots, where she played the niece of the character of Ice Cube, who became the first girl to get into American football professional team. 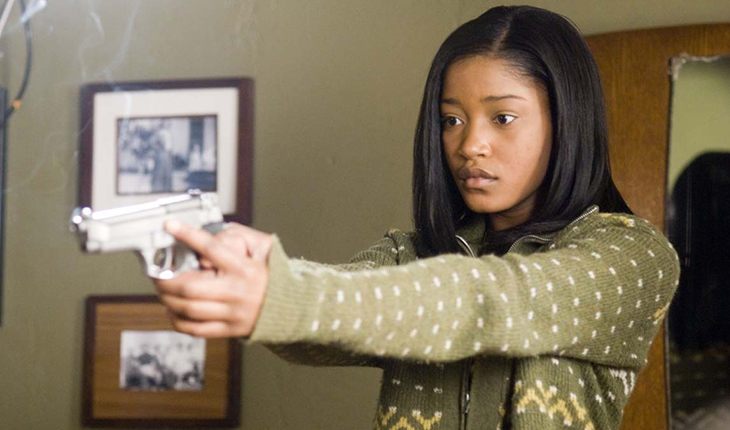 Keke Palmer in the film Cleaner
The young star played the lead role in the sitcom True Jackson, VP by Nickelodeon, and all the members of Palmer’s family participated in the filming. For three seasons, Keke played as True, a 15-year-old designer girl, who was lucky, and she became the vice-president of the Mad Style youth fashion house.

In the musical comedy melodrama of 2012 Joyful Noise, Keke was lucky again to work with the inimitable Queen Latifah, as well as with Dolly Parton and Jeremy Jordan. The actors played as the members of the provincial church choir, who were to defend the honor of the town and win the prestigious competition. 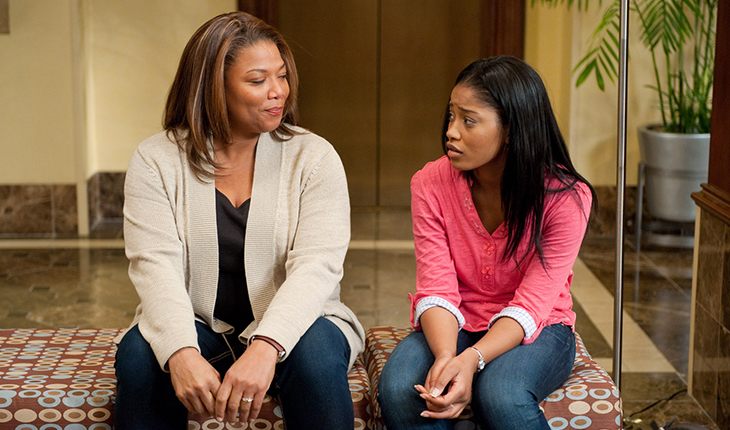 Keke Palmer and Queen Latifah in the film Joyful Noise
In the same year, the actress played in the musical Rags, in which she performed the role of the popular young singer Kadee. As in the previous film, in this film, Keke showed again not only excellent vocal abilities but also the talent of a serious dramatic actress. In this film, Keke’s partner was Drake Bell. 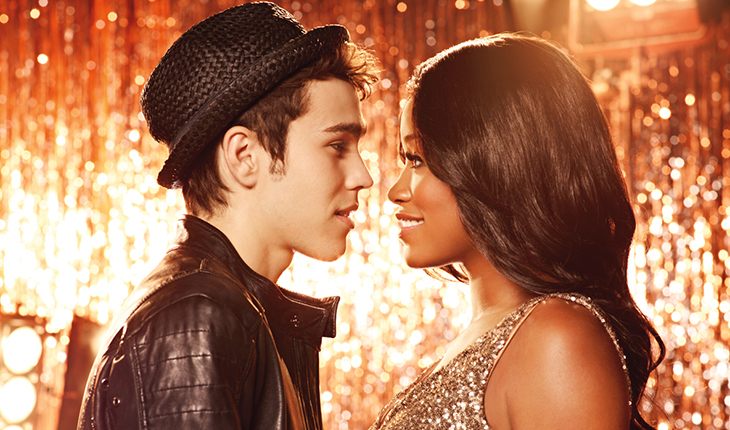 Keke Palmer in the film Rags
In the burlesque horror film serial Scream Queens, the story of which took place on the campus, where a maniac was at work, and not alone, Keke played with Emma Roberts, Lia Michel, Oliver Hudson, Diego Boneta, and also with Jamie Lee Curtis. The project became a gift for fans of black humor, American slasher, and beautiful actresses in mini-skirts. 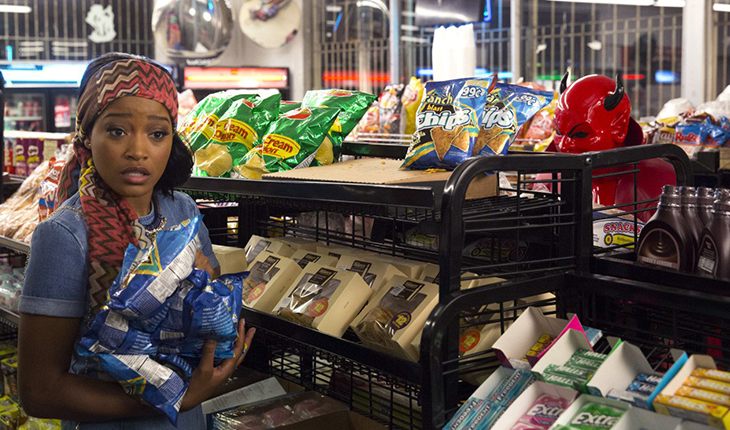 Keke Palmer in the film serial Scream Queens
From the beginning of her acting career, Keke did not forget about music. Three full-fledged studio albums and two dozen music videos lie behind Palmer.
Keke Palmer ‒ Love You, Hate You
The artist often performs charity concerts. It is important to note that charity has a special place in Keke’s life: the girl participates in many programs and actively deprecates domestic violence, helping victims regain faith in life and learn to trust people.

According to Zoomboola.com, in 2018, there was the premiere of the drama Pimp, in which Keke appeared before the fans performing a little unusual character. She played as a girl-pimp Wednesday, who went in search of her mother after the death of her father. 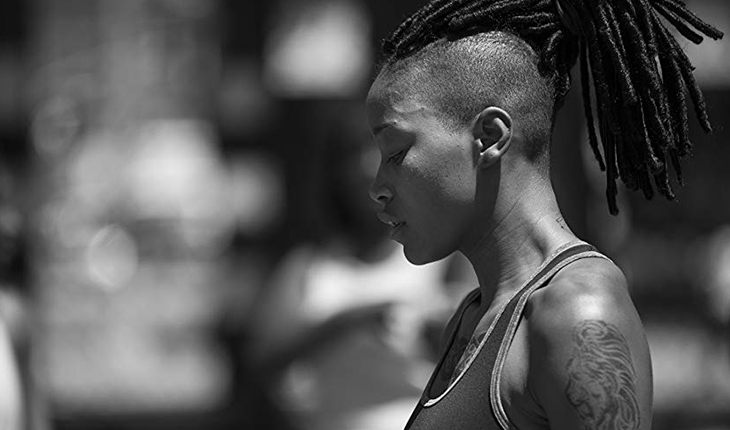 Keke Palmer in the movie Pimp
Since 2018, Keke has joined the serial project Berlin Station, in which she plays April Lewis, an intelligence bureau officer. The rest of the roles involved Richard Armitage, Michelle Forbes, Rhys Ifans, and Ashley Judd. 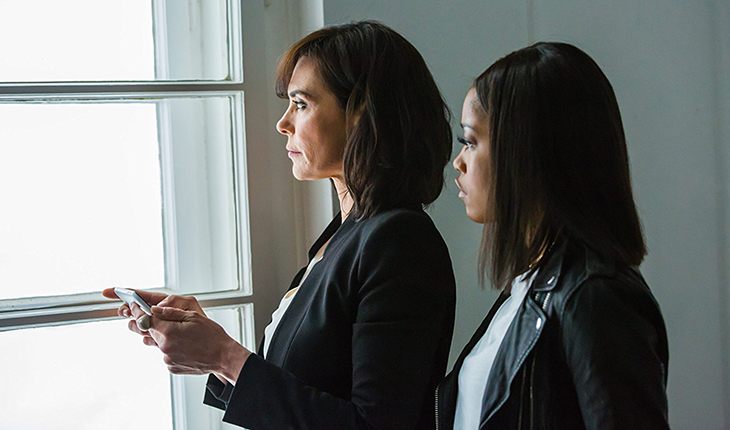 Michelle Forbes and Keke Palmer in the film Berlin Station 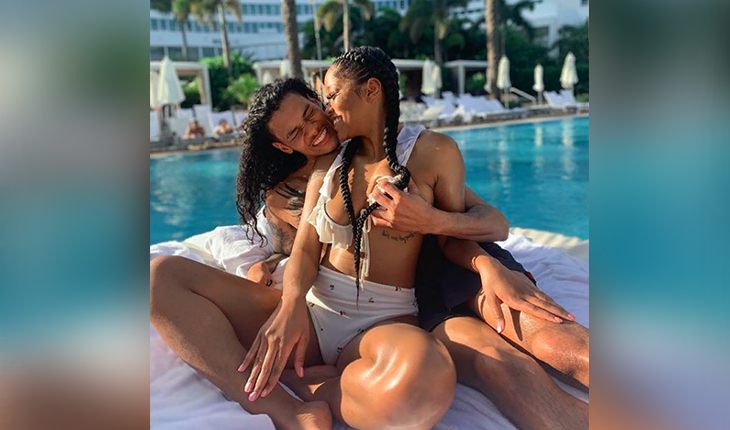 Keke Palmer and Elvin Jackson
Since the beginning of 2018, Palmer has dated a non-public young man named Elvin Jackson, and the little free time that she has left from the shootings she dedicates to communicating with friends and reading classic English novels.

The thriller Hustlers, the filming of which began in March 2019, immediately appeared among the most anticipated premieres, which is quite understandable, because the roles of former striptease dancers who entered the road of revenge will be played by Jennifer Lopez, Cardi B, Lily Reinhart and Constance Wu. Shortly before the start of filming, it was announced that Keke Palmer would be included in the gang of go-ahead beauties, which was a real gift for fans of the actress. In the same year, Keke could be seen in the mini-series Scream: Resurrection.
Hustlers – Official Trailer
In 2020, the premiere of the series Turnt Up with the Taylors, as well as Best Presidency Ever was expected, but the fate of these projects with Keke's participation is still unknown. In 2021, the series The Proud Family: Louder and Prouder are preparing for the premiere, where Keke starred with Tommy Davidson.

John Malkovich where did he study
6.0

Lars von Trier where does he live
5.7

Keke Palmer in her youth
3.6