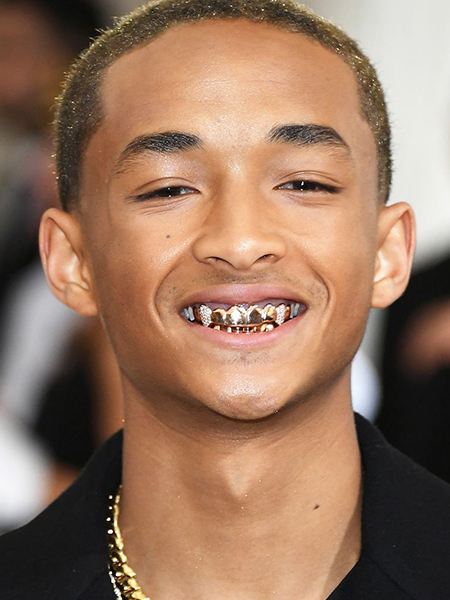 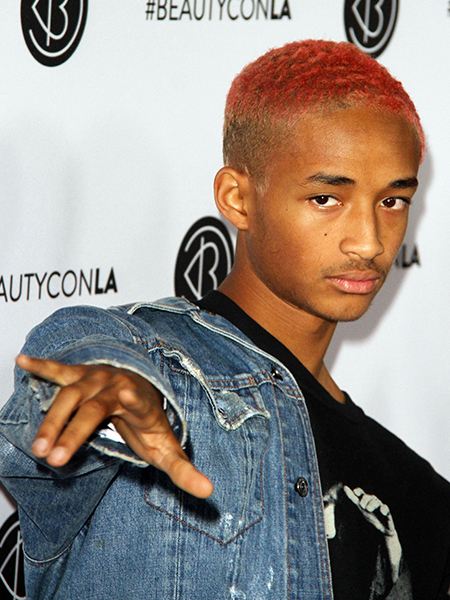 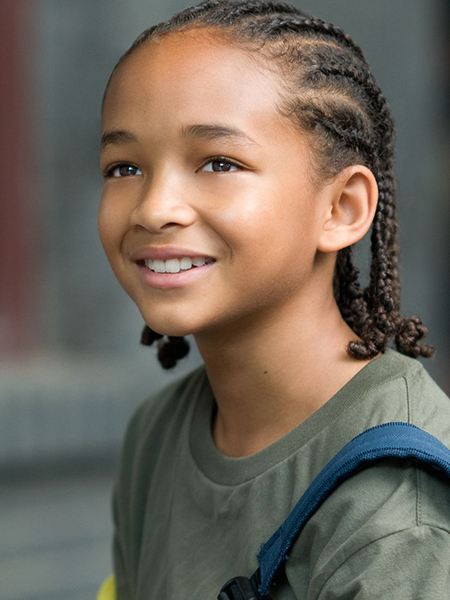 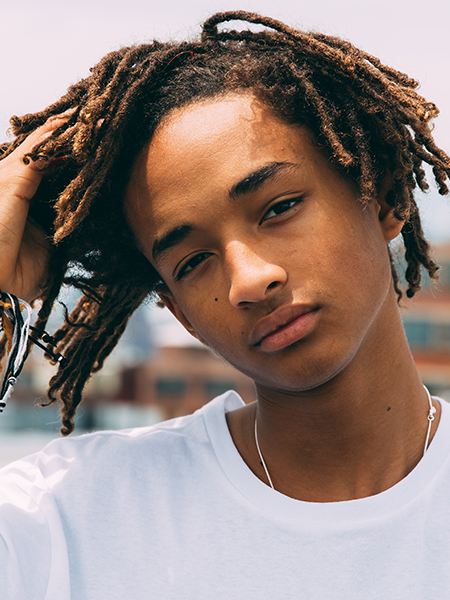 Who is: actor, male singer, rapper 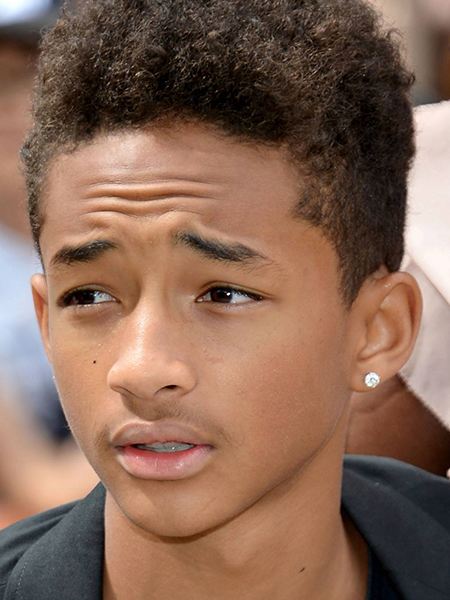 Jaden Christopher Syre Smith was born on July 8, 1998, in Malibu, California. Jaden's father is an actor, musician, and director Will Smith (Seven Pounds, Men in Black, I Am Legend). His mother is an American actress, singer, producer, director, and businesswoman Jada Pinkett Smith. Jaden has the younger sister Willow (born in 2000), a singer and an actress, and half-brother Trey (born in 1992), an actor and a DJ. Getting the primary education, Jaden attended New Village Leadership Academy, and later he and his sister were homeschooled by their parents. It was difficult for the boy to communicate with his peers, who knew something about his parents and their success in cinema. Now Jaden actively promotes homeschooling and encourages people to leave school.

For the first time on the set, Jaden Smith was still in the womb. In the last months of pregnancy, Jada Pinkett Smith starred in the music video for her husband’s song Just the Two of Us (1998), in which there were also Will’s father, his younger brother, and two sisters. At the age of 4, Jaden again starred in his father's music video for the song Black Suits Comin' (Nod Ya Head), which was included in the soundtrack to the movie Men in Black 2 (2002). In 2004, Jaden appeared in several episodes of the TV series All of Us, produced by his father, but the real success was waiting for him. 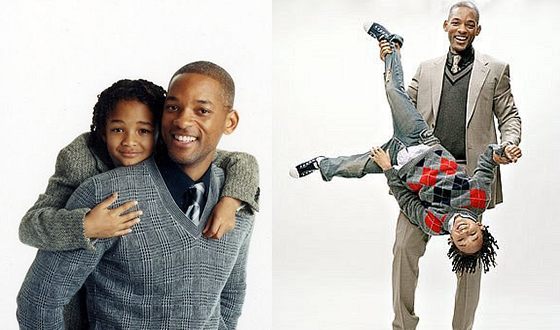 Jaden Smith as a child with his father Will Smith
In 2006, it was released the biographical drama The Pursuit of Happyness by Gabriele Muccino. It tells about a man who has been a poor seller and becomes a successful manager. A new broker can get a lucrative contract, which can solve all his financial problems. But now he and his young son have to sleep on the street, and every day the man has to go in his uniform to the office.
The Pursuit of Happyness (a trailer)
Will Smith played the lead role, and Jaden, respectively, played the son of a homeless broker. According to the plot, a child was 5 years old; at the time of the shooting Jaden was 8 years old. The audience and critics liked this movie, and the young actor won three prestigious awards at film festivals. 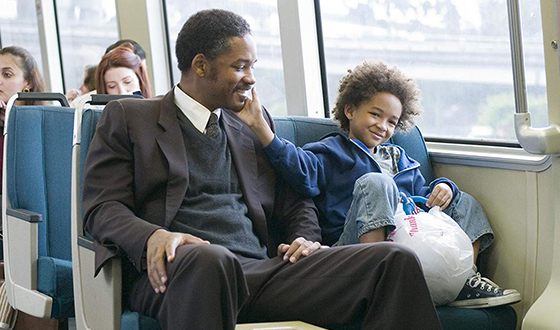 The scene from the movie The Pursuit of Happyness
In 2008, Smith got his second lead role in the science-fiction drama The Day the Earth Stood Still by Scott Derrickson. It is about the invasion of aliens on Earth. Smith knew the lead actor, Keanu Reeves, even before the shooting: the boy's mother played in the sequels of The Matrix, where Reeves also starred. 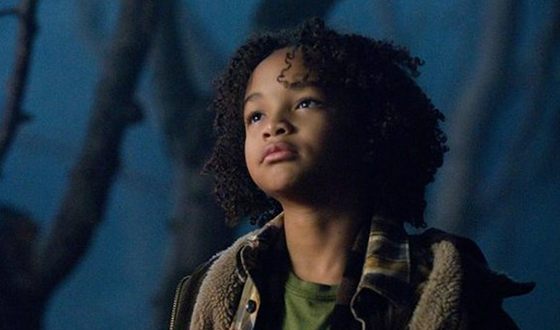 Jaden Smith in the drama The Day the Earth Stood Still
Two years later, the audience saw Jaden in Harald Zwart’s movie The Karate Kid with Jackie Chan. The action movie was made at the expense of Chan and Jaden’s parents. Smith has played a boy from Detroit who is bullied by his classmates and who learns to defend himself through the martial arts. The movie received rave reviews and high ratings of critics who had not already doubted the talent of Smith.
The Karate Kid (a trailer)
In 2013, grown-up Jaden appeared in the sci-fi disaster movie After Earth by M. Night Shyamalan. According to the plot, a spaceship of the father (Will Smith) and son (Jaden Smith) crashes on the Earth that is deserted by humanity. To fly back, they will have to compete with the wild monkeys, poisonous leeches, and alien predator Ursu. This movie received lower ratings than The Karate Kid and a lot of negative reviews that also concerned the acting of Jaden. The boy has accused of the lack of talent and quick fame thanks to his well-known father. 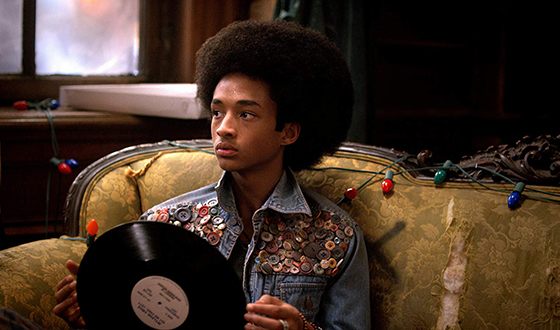 Jaden Smith in the TV series The Get Down
The more successful project of Smith was the TV series The Get Down, which was set in the 1970s, in the epoch of hip-hop and disco, in the South Bronx. In the center of the plot, there is a group of teenagers, one of whom is played by Jaden. His character is Marcus Dizzee Kipling, a graffiti artist, the most talented of the Kipling brothers (played by Skylan Brooks and Tremaine Brown Jr.).

According to Zoomboola.com, in August 2018, it was released the drama Skate Kitchen with Jaden Smith. It tells about the teenage skateboarders in New York City. By the way, Jaden became the only actor in this movie, who had a stand-in for stunts on a skateboard.
Skate Kitchen (a trailer)

In 2010, Jaden Smith with Canadian singer Justin Bieber recorded the song Never Say Never. This song became the official soundtrack to the movie The Karate Kid and subsequently peaked at 8 on the Billboard Hot 100. 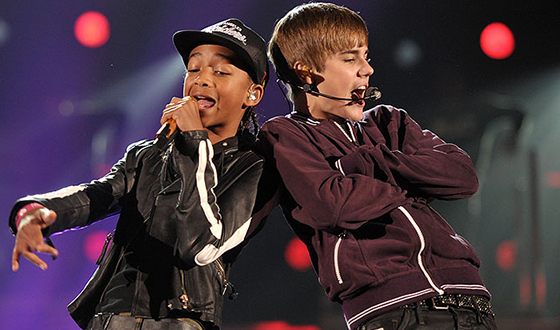 Jaden Smith and Justin Bieber
On October 1, 2012, Jaden released his first mixtape The Cool Cafe, and, two years later, his sequel called Cool Tape Vol. 2. Then Smith started work on his debut studio album Syre, which was released in November 2017. In July of the following year, Smith recorded the second album Syre: The Electric Album.
Jaden Smith - Icon
A funny thing happened with the music video for Jaden’s song Icon. Will Smith decided to congratulate his son with 100 million listenings of his songs on Spotify service and as a gift recorded his version of this video, and, according to many viewers, it turned out even better than the original.

Jaden Smith has his own clothing brand called MSFTSrep. The range includes sweatshirts, T-shirts, pants, and vests. In 2018, Smith launched a line of denim clothes in collaboration with fashion brand G-Star. 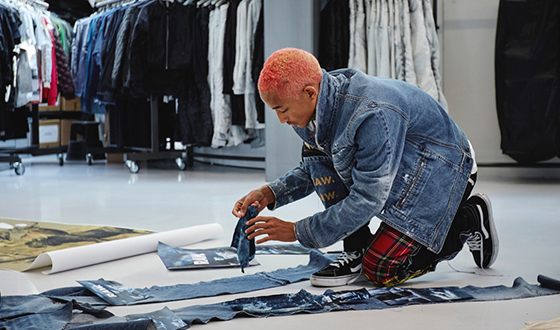 Jaden Smith launched a line of denim clothes in collaboration with fashion brand G-Star
In 2016, the public was excited about Smith's photoshoot for Louis Vuitton, where he appeared in a skirt. The actor became the first male model who was chosen to advertise women's clothes. Jaden explained that in this way he tried to deal with bullying:

Five years later, when your son suddenly wants to go to school in a skirt, he will not be beaten

Smith continues to wear women's clothes. He can often be seen in a skirt or dress, which he harmonizes well with sneakers and men's windbreakers. 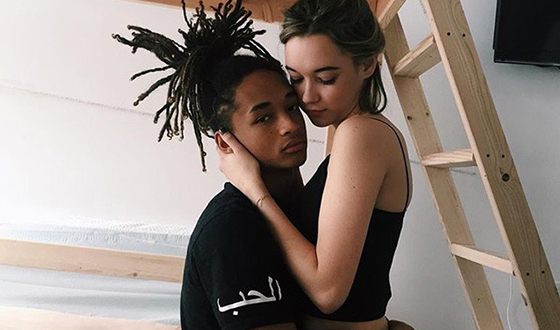 Jaden Smith and Sarah Snyder
From 2015 to 2017 Jaden Smith has dated American model Sarah Snyder, who is 3 years older than he is. They broke up because of too-tight schedules and constant quarrels connected with rumors about faithlessness. But Snyder became a real muse for Jaden - he dedicated to her several songs in his debut album. 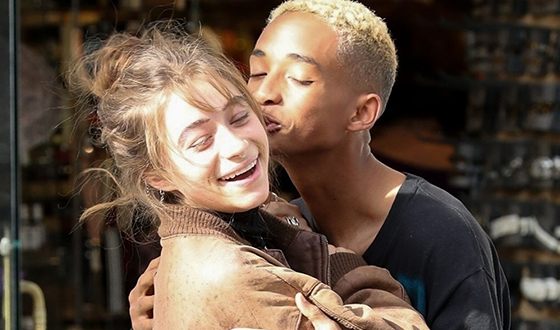 Jaden Smith and Odessa Adlon
After breaking up with Sarah, Jaden began dating Odessa Adlon, the daughter of actress Pamela Adlon from the TV series Californication.

In 2018, a scandal erupted around the personal life of Jaden Smith. At the concert of Smith’s friend, Tyler The-Creator, Jaden admitted that the rapper is his boyfriend. The rapper later laughed at this statement, however, both the media and fans are still perplexed by Jaden's statement. 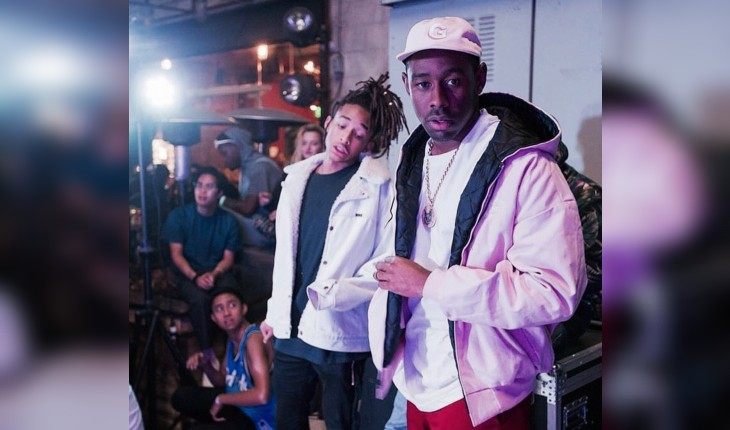 In 2019, Jaden Smith's musical career took a new turn - he released his second album “ERYS”. New film projects with the participation of Jaden in the near future are not planned. During anti-racist Black Lives Matter rallies, Jaden supported the protesters and actively posted on Instagram.

15 stars who survived the horror of braces. Who do they suit more? 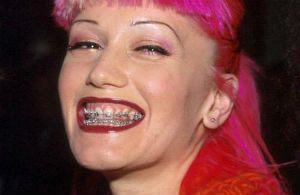 Although braces and plates for correcting bite have become commonplace long ago, people continue to make complexes while wearing orthodontic... 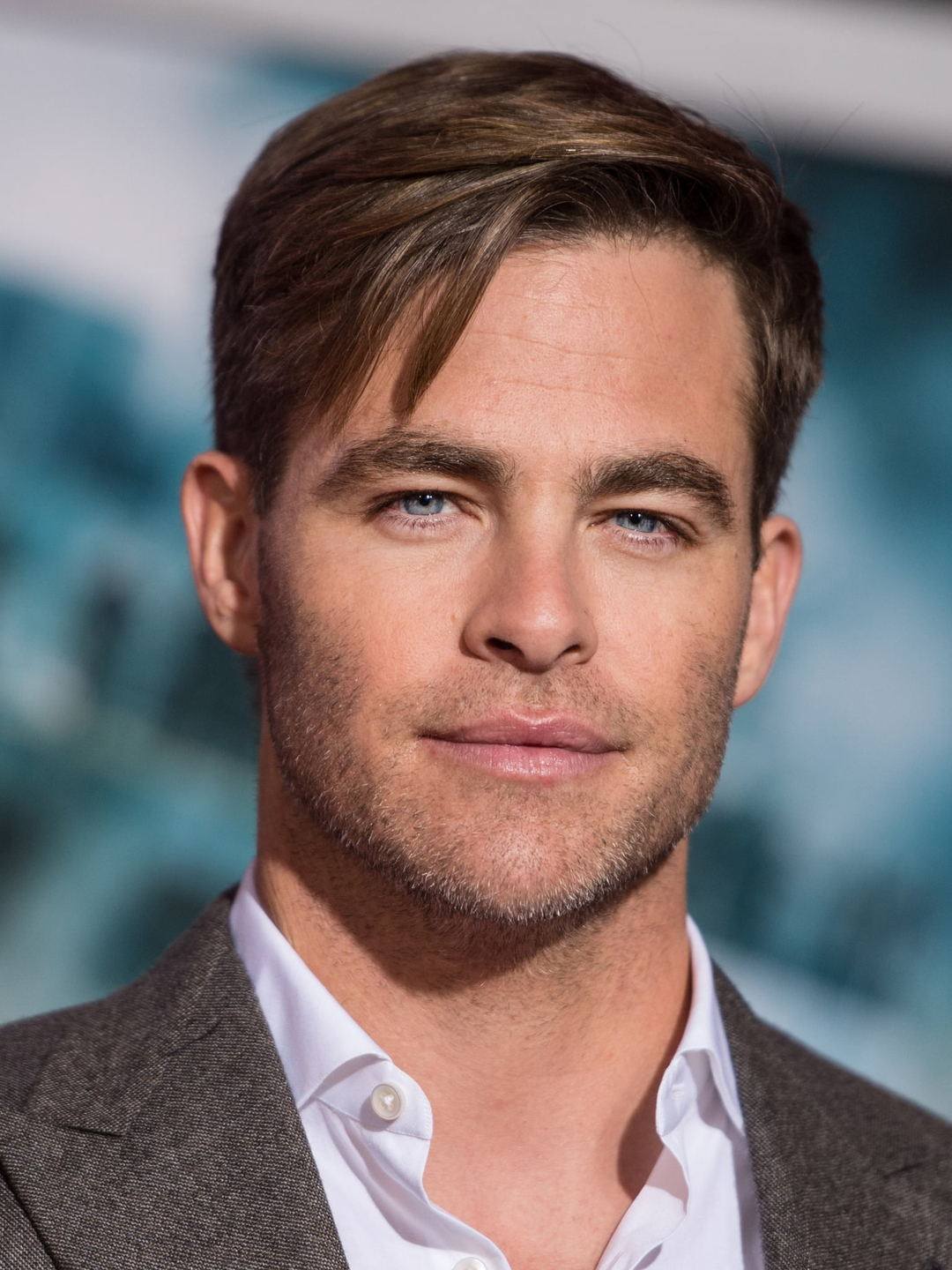 Chris Pine how did he became famous
5.8