American actress of Ukrainian origin Milla Jovovich spoke out against the migration policy of US President Donald Trump. The woman published a selfie with her daughter when walking, and touched on the topic of the division of families of migrants in her microblog.

Saying that, of course I can’t help but think of all the migrant families at our border right now who’s reality is the polar opposite of mine. Though I don’t condone people coming into the US illegally, I know that this country is a dream for most of the world. The promised land where we can make our dreams come true for our children. It’s why my own family defected in the 80’s. To make a better life for me. Their child. I do understand why people would risk everything to come here. It must be so awful where they came from if they would risk so much to get here.

– Jovovich wrote calling to help people whose families were in danger. 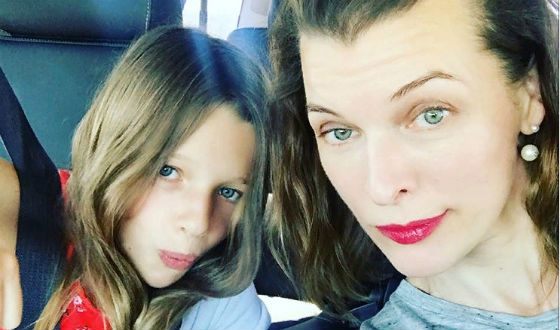 Milla Jovovich with her daughter
We remind that Donald Trump advocated taking away children from those who illegally crossed the US border. However, the protest of the users was caused not by the call of the actress but by the way she looked in the photo. As Milla herself signed, "Yes, I'm flat and do not shave my armpits." Actually, this is what can be seen on the photo. Many people advised the 42-year-old Jovovich to treat herself and noted that after the birth of the second child, the actress's chest became smaller. Many American celebrities, especially women, protested against the migrant policy of Trump. For example, recently singer Sia also called on to help migrants. "Please. We are better than this. Keep families together" – Sia wrote.

Guy Ritchie who is his father
5.9