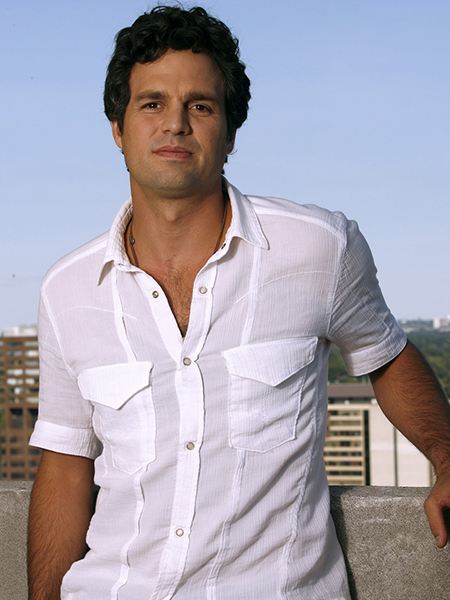 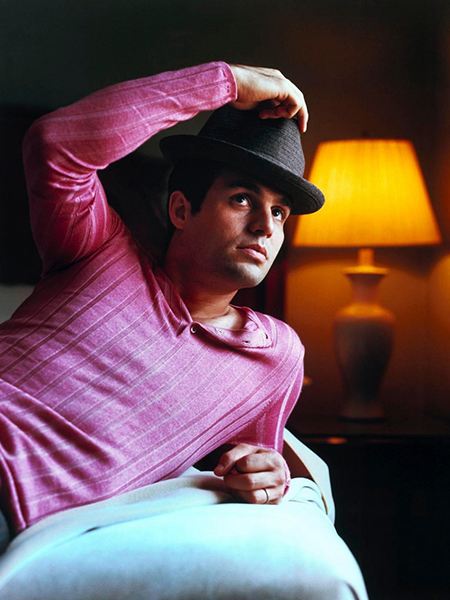 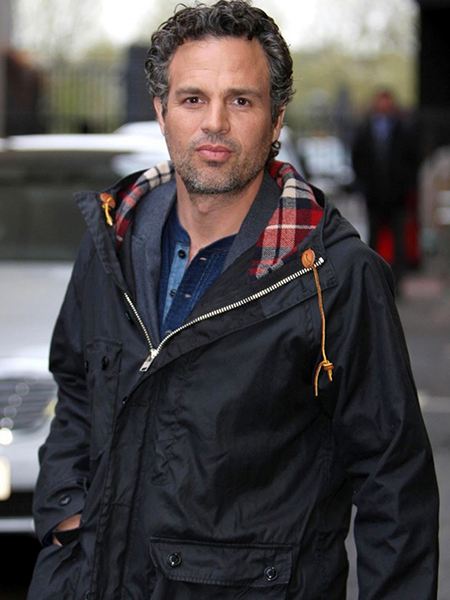 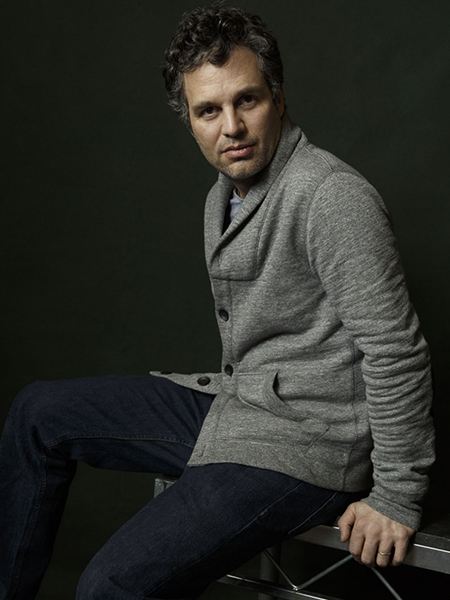 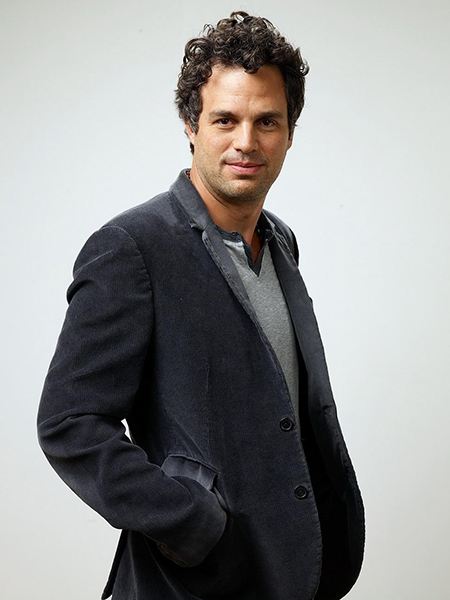 Hollywood star Mark Ruffalo likes to say that he is the lucky one and it’s hard to argue with this since he has everything one can dream about. Popularity and fame came to him after one of his very first roles on a big screen. Although, in order to get this role he had to suffer through more than 800 castings! His actual net worth is estimated to be about $35 million. 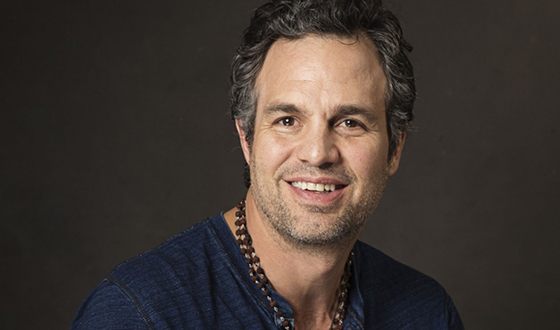 Mark Alan Ruffalo was born on November 22, 1967, in the pastoral little town of Kenosha, Wisconsin, founded around XIX century by Italian immigrants. It’s safe to speculate that Mark’s ancestors were among the founder members of the town since he himself is of Italian descent. It is his ancestry he has to thanks for his striking appearance, splendid curly hair, and hot temper. 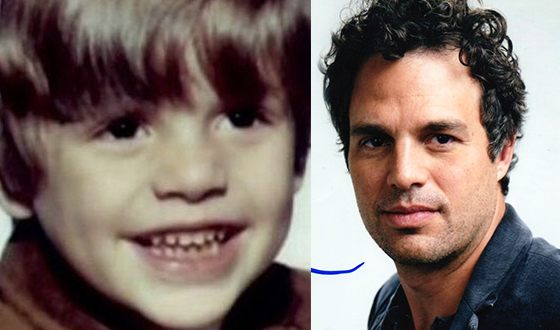 Mark Ruffalo then and now
His father Frank Lawrence Ruffalo was a construction worker and his mother Marie Rose (nee Hebert), was a hairdresser and stylist. They had four children and were devout Catholics, but even that didn’t stop them from divorce, despite it being considered to be one of the most cardinal sins. Young Mark was psychologically traumatized by their break up. 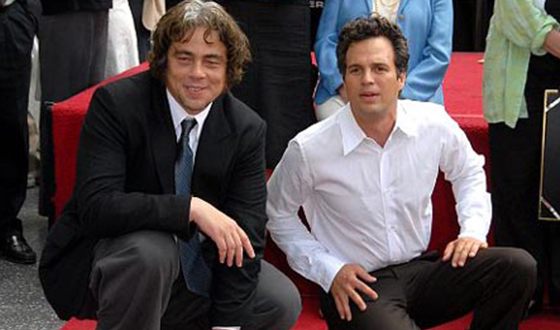 Benisio del Toro and Mark Ruffalo
In his teens, he fancied some wrestling and aimed for a serious sports career. Marks’ school performance, however, left much to be desired; he struggled to study due to his undiagnosed dyslexia and ADD. At the end of the day, he chose to dedicate himself to another his passion - artistry. Right after his family moved over to Los Angeles, he joined the acting school, befriending his fellow talented student Benicio del Toro in the process.

Upon finishing acting school he spent some time in theatre troupe both as an actor and director. However, as much as he enjoyed being on stage, he aspired for a movie career and started to attend numerous castings and look for an opportunity. 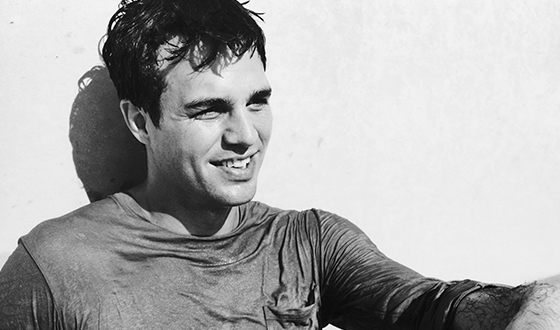 Young Mark Ruffalo
In the interviews, the actor says that he never chased fame and popularity for himself. He always acted the way his soul wanted, the way that felt right. Being a devout Catholic, he knew how to accept failures and take a punch, continuing to attend casings over and over again.

Although, according to Mark, from time to time he gave in to emotions and punched the hell out of the wall of his small apartment out of frustration and despair, hiding the fist marks behind the posters with famous actors. To make the ends meet, he for many years worked as a bartender. Mark considered this job but a stepping stone towards his dream of becoming an actor and used it to practice his abilities, observing customers, their behavior, and copy and imitate them.

Mark was over thirty years old when he finally got his chance. His first appearance on a big screen happened in 1996 in the trash horror movie The Dentist, joining marvelous Corbin Bernsen in the role of a maniacal and sadistic doctor. However, the rising of a new Hollywood wasn’t quite noticed by anyone. The next three years brought Mark only a couple of small roles and none of them really led to breakthrough or renown. 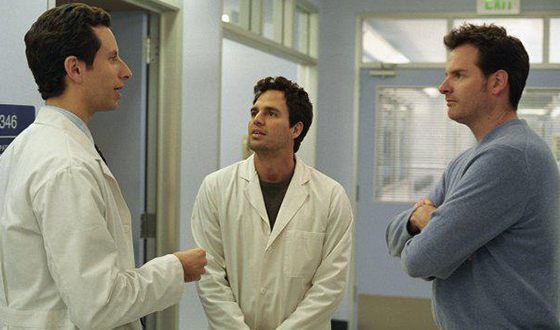 A shot from "The Dentist"
In 1999 Mark go a role in You Can Count on Me by his old theatre friend Kenneth Lonergan. Ruffalo was partnered with already established actress Laura Linney. The movie scored a couple big prizes and awards and brought a spotlight on Mark Ruffalo, drawing Hollywood bonze’s attention to an up-and-coming actor. {img#images/content/2018/11/uzn_15420196623.jpg#Mark Ruffalo in You Can Count on Me) In a period from 1999 to 2003, Mark started to receive decent roles and built himself a reputation of a stable and reliable actor with a great work ethic, who is able to completely adapt to any role. He appeared in hilarious comedy film Apartment 12, portraying a young painter, forced to live with obnoxious and intolerable neighbors. In such movies as Windtalkers and The last Castle Ruffalo paired up with a bunch of eminent actors including Robert Redford, Peter Stormare, and Nicolas Cage.

It is well known that fortune spares nothing for her favorites. Sometimes, however, this cruel mistress makes them face such challenges that will forge their character anew and make them stronger. One might say that this is exactly what happened with Mark Ruffalo. 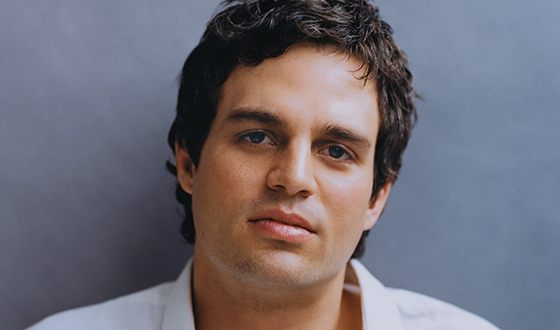 Mark Ruffalo faced plenty of personal trials throughout his life
Elevated by his newfound success, the actor totally missed the sudden deterioration of his health, which he wrote off as simple exhaustion. When Mark decided to consult with the doctors, they diagnosed him with acoustic neuroma that grew so big in size that required immediate surgical intervention. Later the tumor was confirmed to be benign, but even in this case delays with an operation could’ve cost Mark his life.

According to Zoomboola.com, in 2008 died one of the best Mark’s friends, universally beloved actor Heath Ledger. At the end of the same year, Ruffalo had to face another shocking tragedy when he got informed about the death of his own brother. Investigators up to this day can’t tell if Scott Ruffalo was shot, took his own life, or was a victim of a tragic incident. 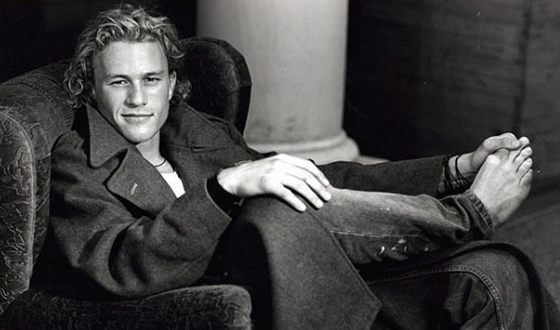 Heath Ledger, one of the Mark Ruffalo best friends
The actor took this life challenges on the chin; Mark kept busy and drowned himself in his beloved work, which helped him to endure the loss of friends and close ones.

The period of time from 2003 to 2010 marks a meteoric rise to the top of the Hollywood food chain for Mark Ruffalo. Actor acquired his own performance style and became renowned for his mastery of the drama genre. He appeared in more than 30 projects, with each of them deservingly placed among the best Hollywood films of the XXI century. 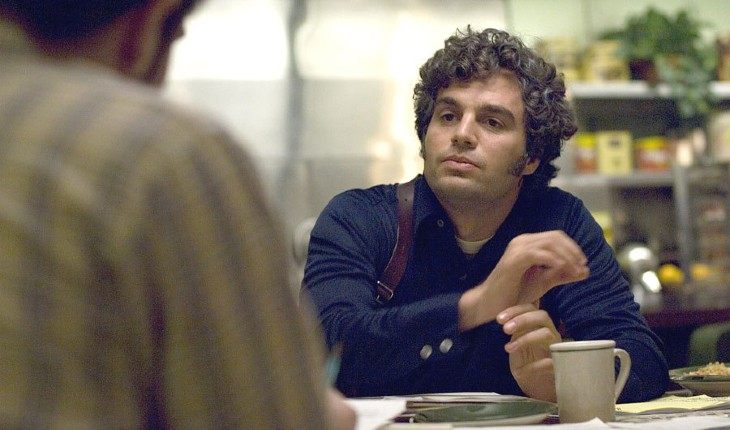 The period of time from 2003 to 2010 is marked by Mark Ruffalo’s overwhelming success
Among the brilliant films casting Mark Ruffalo, critics especially praised American drama movie We Don’t Live Here Anymore, were actor was accompanied by an established cast of Laura Dern, Peter Krause, and Naomi Watts. His portrayal of a police officer in mystery thriller In the Cut is clearly responsible for millions of his fangirls across the globe losing their mind. Along with Ruffalo, this bone-chilling story about the investigation of a horrible murder, closely entwined with elegant eroticism featured Meg Ryan as well as Jennifer Jason Leigh.
We Don’t Live Here Anymore - Trailer
In 2008 actor appeared in apocalyptic drama movie Blindness, accompanied by beautiful Julianne Moore, Danny Glover, and one of his closest friends Gael Garcia Bernal. 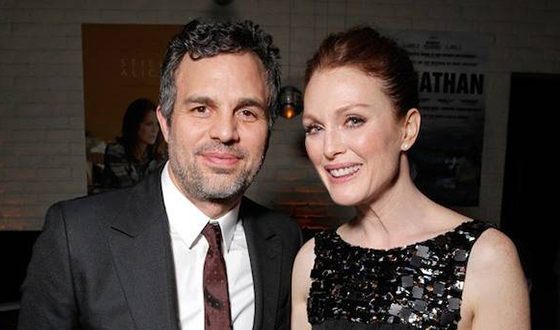 Mark Ruffalo and Julianne Moore
In 2010 actor received his BAFTA nomination for his performance in the comedy movie The Kids Are All Right and got a unique opportunity to join the star-riddled cast of Leonardo DiCaprio, Max von Sydow and Sir Ben Kingsley in psychological thriller Shutter Island, directed by the master of the genre Martin Scorsese.
The Kids are All Right - Trailer
A year later Mark, looking for broadening his horizons, became a director of his own movie; he presented his drama film Sympathy for Delicious, which starred Orlando Bloom and Juliette Lewis. His debut work, according to Ruffalo himself, is a representation of his own life values and belief that no matter what, love will always triumph. Movies decently performed in the box office and received favorable reviews from the critics. 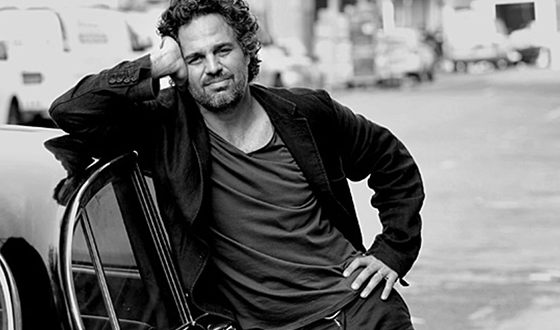 In 2010 Mark Ruffalo made his debut as director
From 2012 to 2017 Mark Ruffalo added quite a few precious lines to his filmography with his involvement in Marvel’s Avengers franchise as Incredible Hulk, appearance in Now You See Me, Foxcatcher, The Normal Heart and Spotlight, that brought him multiple prestigious awards and nominations. 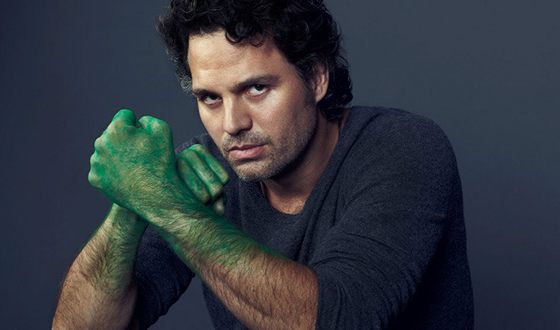 Mark Ruffalo as Incredible Hulk
For his role in Foxcatcher, the actor had to quickly gain 13 kgs. For his impeccable performance, Mark was nominated for the most prestigious movie prize – Academy Award.

In summer 2018 Mark appeared in the new installment of Marvel’s Avengers franchise, where he portrays genius scientist Bruce Benner and his alter-ego, Hulk.

In 2000 the actor married Sunrise Coigney. She is not only an actress but quite a successful entrepreneur; Sunrise owns a whole network of jewelry stores across Europe and North America. Together, they have three children and are overall considered to be one of the most stable and unwavering couples in all Hollywood. 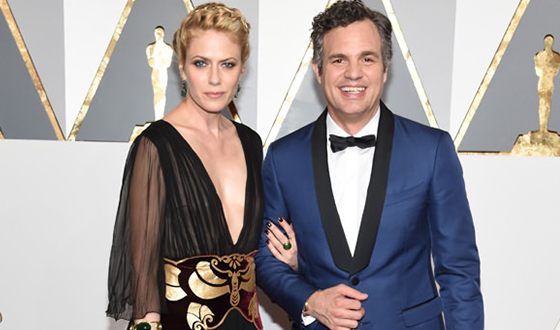 Mark Ruffalo and Sunrise Coigney
Mark Ruffalo is known for his active political position; he was among the celebrities that opposed Donald Trump becoming the president of the USA. Accompanied by Robert De Niro, Cher and James Franco, he was a part of numerous street protests and meetings.

In 2019, the movie "Avengers: Endgame" was released. In the next film from Marvel, Mark Ruffalo again played the role of the Hulk. In the same year, the American drama film "Dark Waters" was released, in which Ruffalo played one of the main roles along with Anne Hathaway. 2020 for Mark Ruffalo is marked by the release of another interesting project, the TV series "I Know This Much Is True", in which he played two roles at once as twin brothers Dominic Birds and Thomas Birds. The premiere of the animated film "What If…?" Is scheduled for 2021. from Marvel.