Who is: movie director, screenwriter

Director Alfonso Cuarón gifted the world with the pictures Great Expectations and Gravity. Cuarón is called the favorite of film academics, his films are record holders in nominations and awards, and the opportunity to play in his pictures is considered an honor for many movie stars. 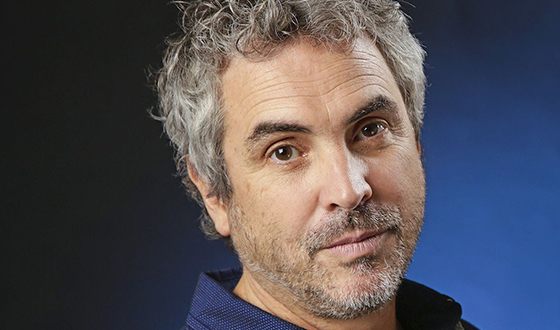 In the photo: Alfonso Cuarón

The future director was born on November 28, 1961, in Mexico City. Alfonso is the oldest of the three sons of a scientist physicist. One of his brothers became a biologist, the second, Carlos, also became a director (Rudo y Cursi).

Alfonso’s family was considered prosperous. Cuarón’s Roma, which was nominated for an Oscar is mostly autobiographical and tells the story of a middle-class family on the background of the social atmosphere in Mexico in the 1970s. 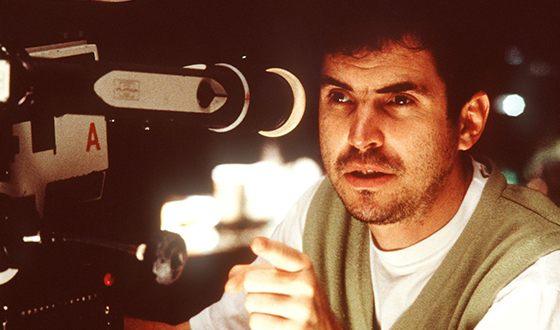 Director Alfonso Cuarón was born in Mexico City
As a child, he never dreamed of cinema exactly until he was given a movie camera. Before that, the boy wanted to become an astronaut than a scientist, like his father, but as soon as he saw the world through the lens, everything changed. After lessons, Alfonso went to the cinema, where he watched all the films in a row, and then tried to make his own movie.

After graduating from school, the young man entered the university, where he began to study philosophy and also attended classes for filmmakers. At the classes he met cameraman Emmanuel Lubezki, with the help of whom he made his first short meter, the Vengeance Is Mine and cooperation, which would continue for many years. 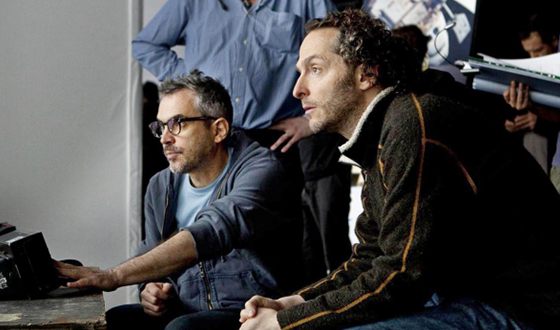 Alfonso Cuarón and Emmanuel Lubezki
The young director’s first work played a cruel joke with him and served as a reason for him to leave the university. The scandal erupted because of copyright: the university management insisted that the tape belonged to the university, as it is educational and cannot be put up for sale, which Cuarón did not agree with.

After the young man left the university, he began working as a technician on Mexican television and then received the position of assistant director.

The young director’s debut in big cinema was the 1991 Sólo con Tu Pareja melodrama, where he unprecedentedly plays the topic of AIDS infection, giving the picture a shade of black humor. The experiment’s courage was his approach to the problem: Cuarón dared to laugh at the fact which terrified the people in the early 90s. The picture was shown in the framework of the competition program at the festival in Toronto. 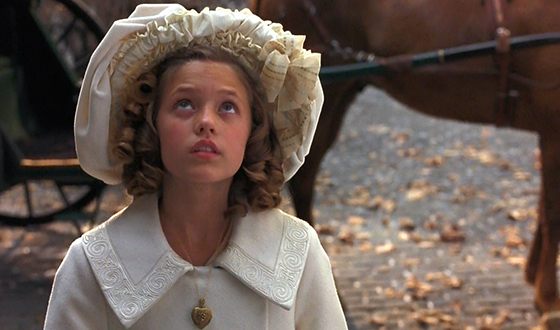 A shot from the A Little Princess
The second film directed by him in 1995, A Little Princess received two Oscar nominations. In the fairy tale about a girl, whose imagination helped her survive misery, which fell on her part, won the hearts of the audience and revealed the director’s name to the whole world. The film starred Liesel Matthews and Liam Cunningham.

The Great Expectations (1998) drama starring Ethan Hawke and Gwyneth Paltrow as aristocratic beauty Estella melted the hearts of even the most skeptical film critics, according to Zoomboola.com.

The Bright and modern reading of the novel by Charles Dickens, dressed in stylish scenery, made it clear that nothing in the world has changed for two hundred years and love, loyalty to dreams, and the word of honor will always be the main values. The picture is considered one of the best screenings of the famous novel.

Like many pictures by the artist, the Great Expectations are filmed in green shades. Green, according to the master, carries a double meaning - fall and hope at the same time, which perfectly reflects the duality of the characters’ nature.

The name of the 2001 film Y Tu Mamá También as well as its genre, declared as a comedy-drama, could scare off the audience but not in case it’s directed by Cuarón. The success of the previous works forced the audience to go and watch what really shocked them. 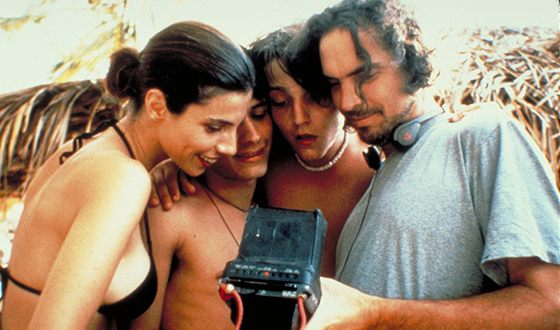 On the set of Y Tu Mamá También
The romantic beginning when two teenagers run off on a journey with an adult girl who teaches them the tricks of carnal love was not overshadowed by the tragic ending of the story. The duality that runs through all the pictures of the Mexican director meant life and death in this case.

Diego Luna and Gael Garcia Bernal played in the film, which confirmed the appearance of the extraordinary director and won more than thirty awards. The film is included in the 20 best non-English-speaking films of all time. 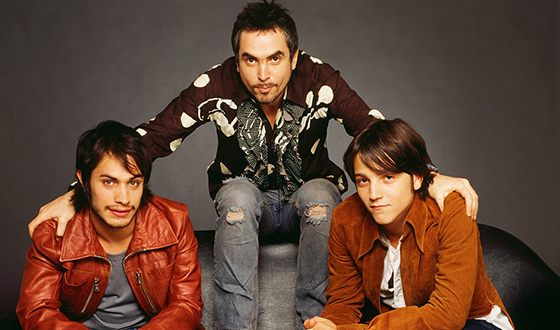 Gael Garcia Bernal, Alfonso Cuarón and Diego Luna
In 2004 Cuarón undertakes the creation of the third part of Potteriana. The Prisoner of Azkaban stands out among the films of the saga: the heroes are no longer children and are awaiting adult experiences, which is emphasized by the luxurious gloomy atmosphere and corresponding decorations. Inviting Gary Oldman for the role of Sirius Black was also Cuarón’s idea. 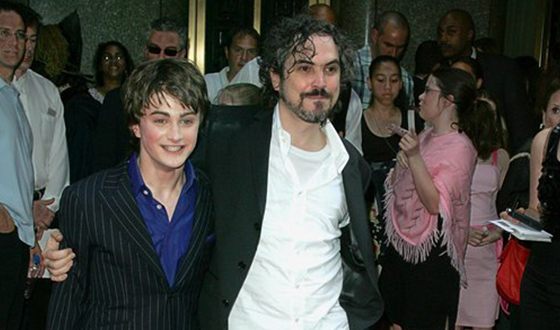 Alfonso Cuaron and Daniel Radcliffe
In 2006 the director again surprised the audience by making the Children of Men fantastic drama thriller with Clive Owen. Interestingly, completely failing at the box office, the picture received exclusively laudatory reviews. In the terrible and beautiful dystopia, the director predicts the end of civilization but, unlike others, does not deprive people of a human appearance, leaving hope. 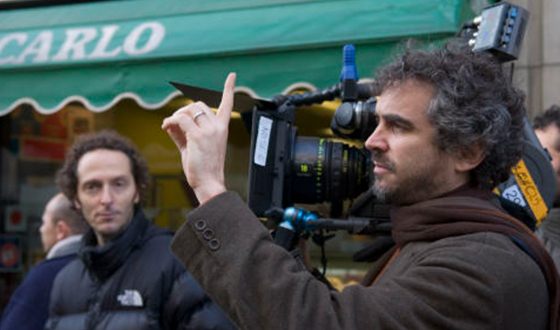 On the set of the Children of Men
After a six-year break in his career, the director presented the picture Gravity, which received seven golden statuettes. In addition to awards from film academics, the Gravity was awarded the Golden Globe, Saturn, and six BAFTA awards. Only two actors were shot in the best film of 2013: George Clooney and Sandra Bullock.
Gravity - Trailer
Duality is everywhere in the picture: the serene charm of the universe is confronted by the danger chasing the astronauts, male prudence - women's daydreaming. Even experienced art historians cannot describe this film, for it represents an unimaginable level of skill, it is a feature of true beauty and freedom.

In 2018 the film "Roma" was released, stylized, and very personal, shot in black and white, it differs from all the works of the master. Cuarón himself was the producer, director, and cameraman of the picture about the life of a wealthy Mexican family in the background of mass protests in Mexico’s 70s. Yalitza Aparicio, Marco Graf, Marina De Tavira played in the film. In February 2019, Roma claimed the main film awards in ten Oscar nominations and won in three, including the best direction.
Alfonso Cuaron’s directing style in the Roma

The director’s first wife was Mariana Elizondo, with whom he began to meet while studying at the university. Mariana became the mother of Jonás Cuarón, who followed his father’s footsteps and co-wrote the script for the Gravity. 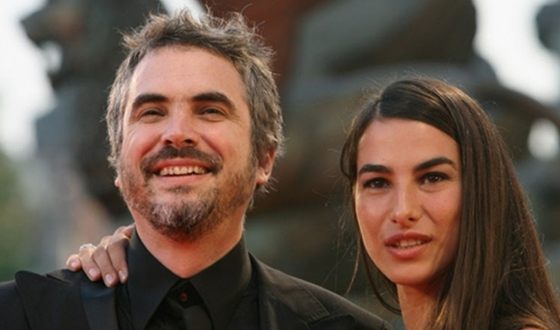 Alfonso Cuarón and Annalisa Bugliani
The marriage with Mariana lasted until 1993 and broke up due to Alfonso's passion for actress Claudia Ramirez, who played in his first picture. However, the director did not marry beauty Claudia, Annalisa Bugliani, a well-known film critic, whom he met while presenting his film Y Tu Mamá También in Venice became his next wife in 2001. From this marriage the director has a daughter, Tess, and a son, Olmo, suffering from autism in a severe form. 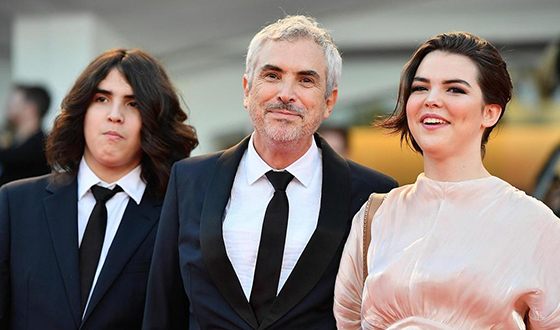 Alfonso Cuarón with his son Olmo and daughter Tess
In 2008 Alfonso divorced again. It is known that since 2011 he has been in a relationship with Sheherazade Goldsmith, who is ten years younger than him. Sheherazade is half Columbian, she is an entrepreneur, a jeweler, and an environmental activist and has three children from her first marriage with a member of the British parliament Zac Goldsmith.

In 2020 the movie "The Witches" by Robert Zemeckis produced by Alfonso was released. The plot of the film tells the story of a boy who meets a witch who dreams of turning all children into mice. The main character is performance by Anne Hathaway. Also, in 2022 he continued the work on upcoming horror-series "Ascension"

Will Poulter way to fame
5.6