Main page
Celebrity News
Shakira’s coach told how to get perfect hips
Discuss
1
On the rise of her career, Shakira was remembered with a strong press, a thin waist, and seductive hips. This is what she still looks like.

It turns out that the secret of the chic figure of the Colombian is not only heredity. Shakira's coach Anna Kaiser told us what the singer does and eats to delight the public with her forms.

Firstly, the singer does only what brings her pleasure. She does not like monotonous training, and alternates tennis, squash, rowing, ballet, kickboxing, zumba, and pilates. At the same time, the trainer of Shakira notes, it is important to work out regularly and to overcome laziness.

Secondly, Shakira wors hard on her buttocks. She does the following exercise suggested by her coach: to sit down in plié and tighten the buttocks 30 times. "Give all you've got, 150 percent!" – Anna says. Also, dancing is an important element in shaping the singer's feminine figure. By the way, another owner of the chic body Beyonce keeps talking about the benefits of dancing. 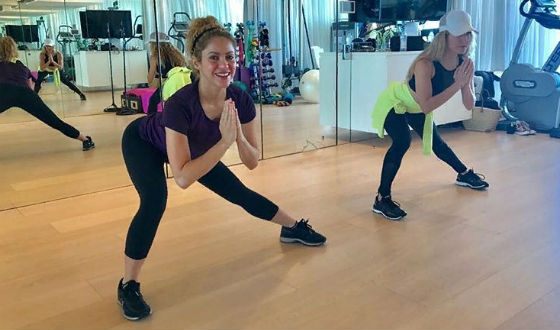 Shakira
Thirdly, the star eats often and in small portions (200-300 kcal each). This allows her to speed up metabolism and cope with night hunger. In addition, Kaiser advises not to train with an empty stomach. The best decision is to eat one and a half hours before working out.

In Shakira's diet, there are meat (chicken), greens, vegetables, cereals, protein shakes, fruits, and berries. However, the singer adores chocolate and sometimes can afford to forget her diet. Fourth, the singer sleeps for at least 7-8 hours a day. Everyone knows that healthy sleeping is the guarantee of beauty. Fifth, according to Anna, Shakira is not striving for the perfect figure. Instead, her goal is harmonious one. A woman does not get stressed when she gains a couple of kilograms and treats her body lovingly.

In addition to a successful creative career, Shakira also has an intense family life. Since 2011, she is in a relationship with the Spanish football player Gerard Pique, a defender from FC Barcelona. The couple brings up two sons.

Taylor Swift who is her father
5.9