The author of the painting is a local artist Alexander Nemtsov. On a painting called "Under the Peaceful Sky," the Russian President appears as a deity in gold armor. Vladimir Putin is riding on the chariot in the sky, and just below there are Dmitry Medvedev, Nicholas II, Patriarch Cyril and the Virgin with the baby. In the background, one can see the flag of "United Russia." 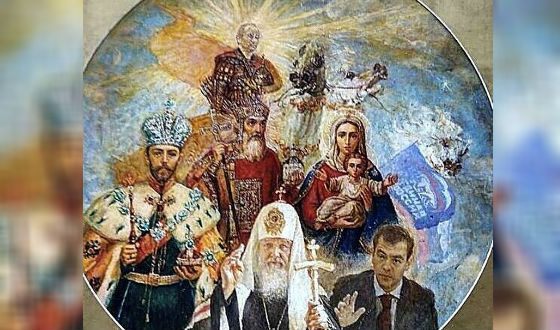 The Tula artist presented Putin and Medvedev as a deity
The painting "Under the Peaceful Sky" was presented at the exhibition along with other works by Nemtsov. Let us note that earlier, the artist depicted the first Russian president Boris Yeltsin, his successor Vladimir Putin, and Patriarch Alexy II. The background of this "holy trinity" is the Cathedral of Christ the Savior.

Justice Smith how old is he
3.8

Riley Keough does she have a husband
4.0

Eiza Gonzalez where does she live
5.1