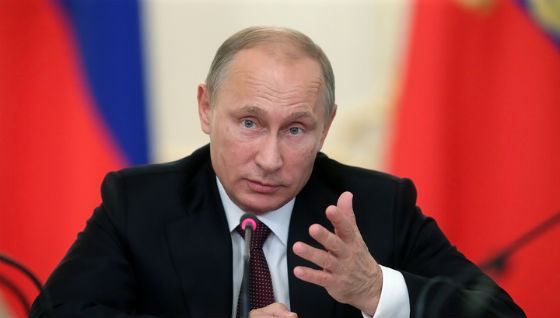 Vladimir Vladimirovich Putin is a President of the Russian Federation

Childhood and the family of Vladimir Putin

Vladimir Vladimirovich Putin was born on October 7, 1952, in Leningrad. Putin recalled, «I'm from the commoners, and I've been living this life for a very long time, practically my whole adult life. I lived as an ordinary person, and I always have this bond». 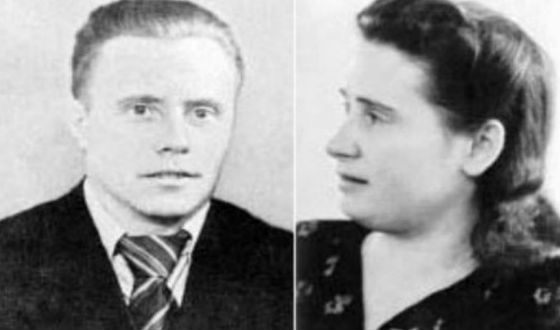 Parents of Vladimir Putin
Putins lived in a multifamily unit apartment with substandard conditions in Baskov Lane. Vladimir Putin's father is Vladimir Spiridonovich Putin. From 1933 to 1934 he served in the submarine fleet. In June 1941 he was drafted to the war front. Vladimir Spiridonovich was seriously injured in the leg while defending the Nevsky Pyatachok. After the war, he worked as a foreman at the Yegorov plant.

Mother is Maria Ivanovna Shelomova survived the blockade, then she also worked at the plant. 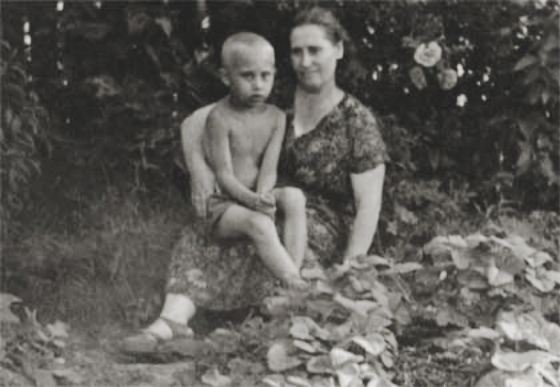 Vladimir Putin with his mother
Vladimir Putin's grandfather was a cook, and his dishes were served at the table of the highest state and consignment officials including Stalin and Lenin.

Vladimir Vladimirovich Putin is the third son in the family. Two of his older brothers died as a child: Victor died before the war, and Albert died during the blockade.

After Vladimir Vladimirovich became a president, he shared that in his childhood he liked to watch Soviet tapes about secret service agents and dreamed of working in government departments: «Even before I finished school, I had a desire to work in intelligence service. But soon I wanted to become a sailor. But then again as an agent. And at the very beginning, I really wanted to be a pilot». 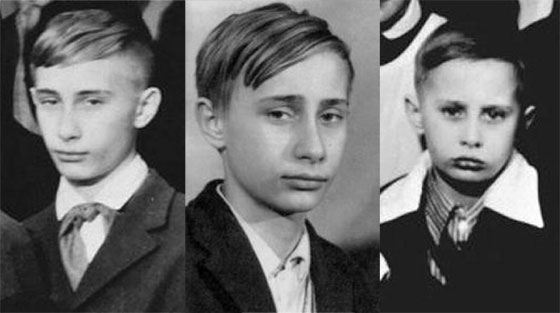 Putin`s career in the KGB

In 1975, Vladimir Putin was sent to serve on the State Security Committee after receiving the diploma. In the same year, he was promoted to the second lieutenant of justice in the system of territorial bodies of the USSR KGB, having completed training courses for the operational staff. 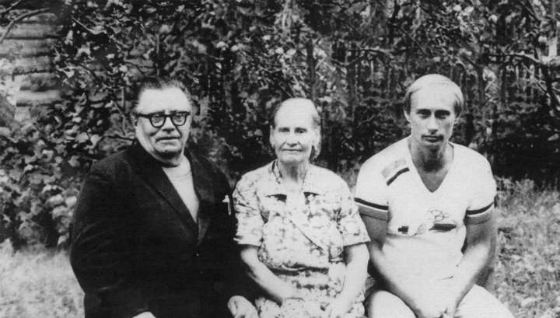 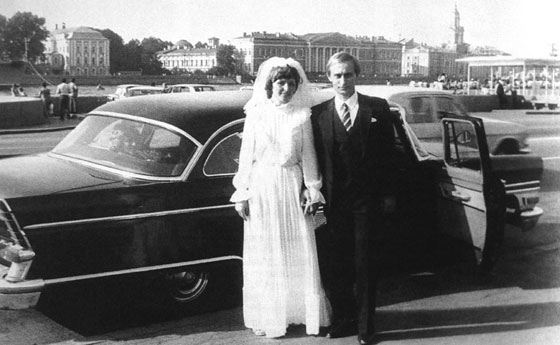 Vladimir Putin and his ex-wife Lyudmila
In 1984, Mr. Putin was seconded to study at the Institute of the KGB of the USSR in the specialty of «Foreign Intelligence» in the rank of Major of Justice. There, Vladimir Vladimirovich continued his study of the German language and was trained to serve in the GDR.

Vladimir Putin in the GDR

From 1985 to 1990, Putin worked in the GDR. He served in Dresden under cover of the post of director of the Dresden House of Friendship of the USSR-GDR. On the length of service, he was promoted to lieutenant colonel and post to senior assistant to the department chief.

In 1989, Vladimir Vladimirovich was awarded a bronze medal «For Merits to the National People's Army of the GDR».
Vladimir Putin's Rise To Power: Documentary
After the foreign mission was over, Vladimir Putin continued his service in the Leningrad KGB administration, refusing to go to the central intelligence apparatus of the KGB of the USSR in Moscow.

Vladimir Putin in the administration of St. Petersburg 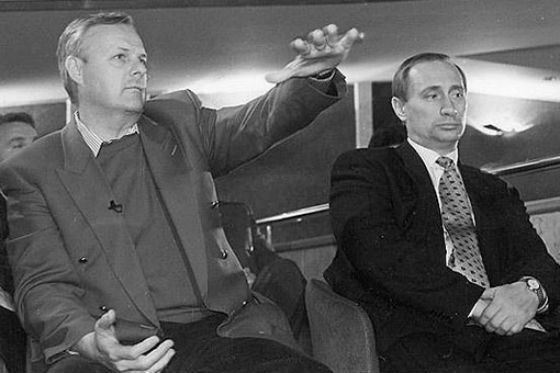 Vladimir Putin and Anatoly Sobchak
Putin was recommended to Anatoly Sobchak as a good worker, and in 1990 the future president of the country became a mayoral advisor in St. Petersburg. With the transition to a new job, Putin resigned from the KGB Service. In the new position, Putin was entrusted with the post of chairman of the Committee for External Relations of the St. Petersburg administration. In 1994 Vladimir Vladimirovich was appointed first deputy prime minister of St. Petersburg with the retention of the previous post. A year later he rose at the helm of the regional department of the NDR party («Our House is Russia»).
Vladimir Putin on Ukraine
In 1992, a group of deputies of the Lensoviet, headed by Yuri Gladkov and Maria Salie, put forward charges against Putin in the scheme of supplying Petersburg with foodstuffs in exchange for raw materials. Putin claimed that the Salie Commission did not actually conduct any investigation, and there was no one to prosecute and no reason to prosecute. The scandal was kindled to make Sobchak fire Putin.

For three years, Putin has risen from the Deputy manager of the President to the Secretary of the Security Council. In 1996, after the failure of Sobchak in the election of the governor, Vladimir Vladimirovich was invited to Moscow to the post of deputy manager of the President of the Russian Federation. Putin oversaw the legal management and management of Russia’s foreign ownership.

«I cannot say that I did not like Moscow. I just loved Petersburg more. But Moscow quite obviously is a European city», - these were comments on Putin's appointment to a new position.

In the spring of 1997, Vladimir Putin was appointed deputy head of the presidential administration, replacing Alexei Kudrin. 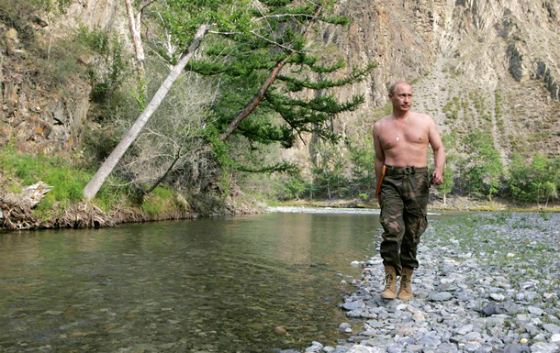 Vladimir Putin have to visit different parts of the world according to his official duties
In the summer of 1998, he headed the FSB of Russia, and in autumn successfully reorganized its structure. Six months later, Vladimir Putin assumed the post of Secretary of the Security Council of the Russian Federation with the retention of his position in the FSB. 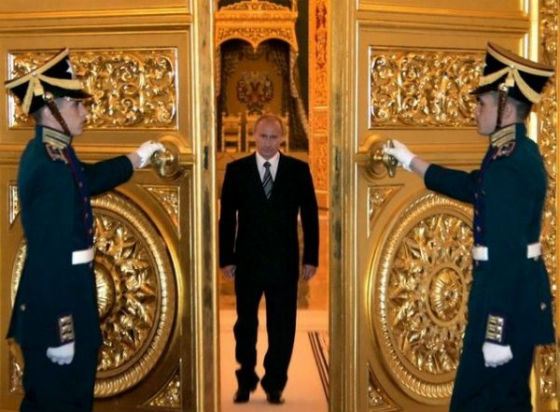 Vladimir Putin became Boris Yeltsin's successor
Putin recalled this: «Boris Nikolayevich invited me to his place and said that he has an idea to offer me the post of Prime Minister. <...> By the way, he did not utter the words «successor» in a conversation with me. Yeltsin talked about a «Prime Minister with a perspective» that if everything goes well, he would consider this possible».

In 1997, Vladimir Putin defended his Ph.D. thesis in Economics in the Mining Institute of St. Petersburg. The title of the work is "Strategic planning of the reproduction of the region's mineral and raw materials base in the conditions of the formation of market relations (St. Petersburg and the Leningrad Region). 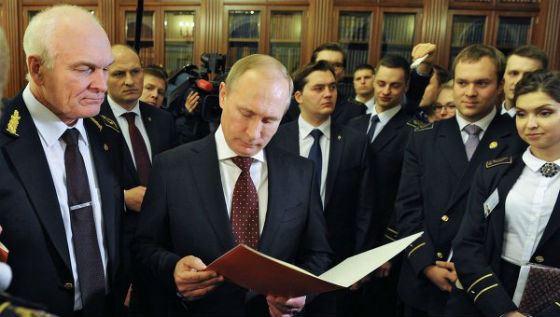 Vladimir Putin as a Candidate of Economic Sciences

The beginning of the presidency of Vladimir Putin

On December 31, 1999, Yeltsin resigned, and Putin became the acting president of Russia: he was given symbols of power, including a «nuclear suitcase». According to Vladimir Vladimirovich, it was not an easy decision for him.
On the one hand, there are internal arguments. But there is another logic. The fate is such that you can work at the highest level in the country and for the country. And it's stupid to say: no, I will sell seeds, or not, I will take up the private law practice. Well, then you can do it, after all. First, work here, then there.
In March 2000, Vladimir Putin was elected as a president and took up his post on May 7. On March 14, 2004, he was re-elected for a second term. On May 7, 2008, he transferred power to the former head of the presidential administration, Dmitry Medvedev. 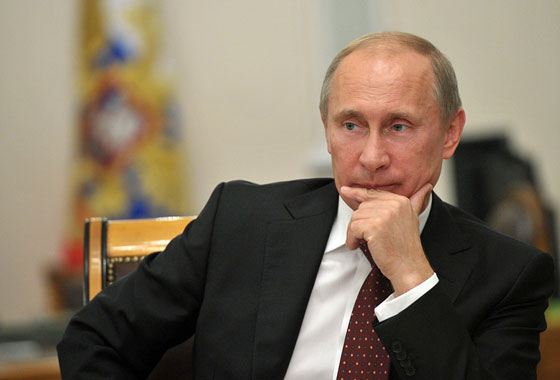 Many Russians want to see Vladimir Putin as a President
On May 8, 2008, Vladimir Putin was appointed to the post of Prime Minister of Russia, on May 12, he announced the cabinet of the new government. In November 2010, Putin was ranked 4th in the list of the world's most influential people according to Forbes magazine. 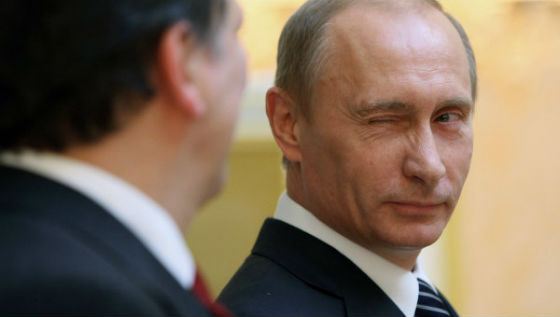 Vladimir Putin defends the Russia’s interests
In the presidential election on March 4, 2012, Putin won in the first round, gaining 63.6% of the vote and on May 7 he took up his post as head of state for the third time.

The third presidential term of Vladimir Putin was marked by complex historical events. Russia's position on the Ukrainian crisis and the accession of the Crimea to the Russian Federation, the victorious performance of Russian athletes at the Olympics and Paralympics in Sochi, a successful military operation in Syria - all this affect the rating of the country's first person. The poll data, published in October 2015 by the All-Russian Public Opinion Research Center, show that 89.9% of Russians approve of Vladimir Putin's actions.
Annual Vladinir Putin «Direct Line 2017», full version [english]

Vladimir Vladimirovich met his future wife Lyudmila in 1980. On July 28, 1983, they were married. Two years before his departure to Germany, the first daughter Maria was born, and a year later, in the hospital of Dresden, the second daughter Catherine was born. The privacy of Putin's daughters is guarded very carefully. 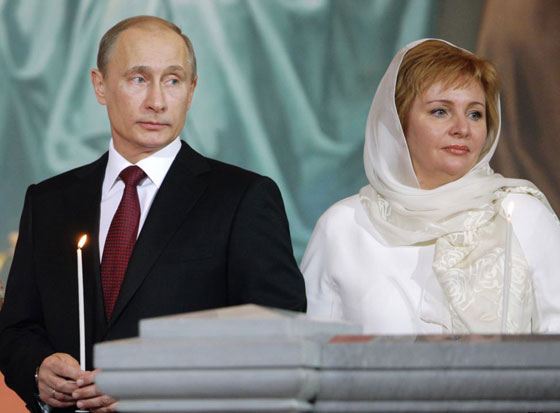 Vladimir Putin divorced his wife Lyudmila in 2013
Maria graduated from the Faculty of Biology of St. Petersburg State University (she studied under an individual program) and graduated from the Medical Faculty of Moscow State University. Yorrit JoostaFaassen was called in the media as Maria's husband. He is a businessman from the Netherlands. According to unofficial data, on August 15, 2012, Maria gave birth to her son. 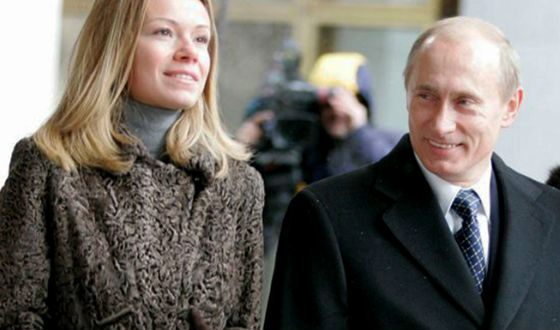 Maria, the eldest daughter of Vladimir Putin
Katerina from an early age showed interest in Asia, so she graduated from the Department of History of the Far Eastern countries at the Oriental Faculty of St. Petersburg State University (specialty «History of Japan»). She studied like her sister according to an individual plan. Her formal classmates declared that they had never seen a girl in the university. Ekaterina Putin leads the National Intellectual Development Foundation and married to businessman Kirill Shamalov who is deputy chairman of the board of the Sibur oil holding. 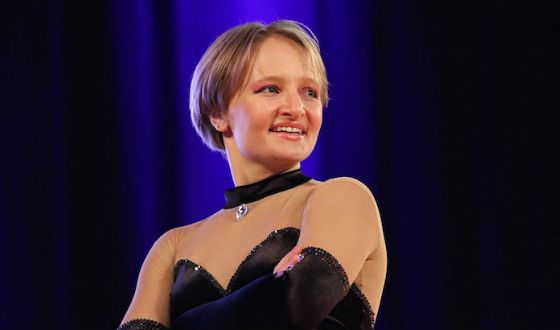 Ekaterina Putina
On June 6, 2013, Vladimir and Lyudmila Putina announced the dissolution of the marriage by mutual decision in an interview with the TV channel "Russia-24". In the media, this information was discussed for a long time. The reasons for the divorce were allegedly existing relations between Vladimir Vladimirovich and Alina Kabaeva. 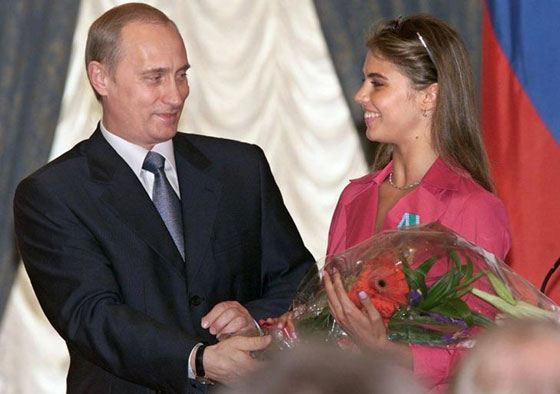 Vladimir Putin is fond of sports. He goes skiing, has the title of Leningrad champion in judo and champion of the Trud voluntary sports society.

In 1999, he co-authored with Alexei Levitsky and Vasily Shestakov and released the book «Learn Judo with Vladimir Putin». In 2013, he became the owner of the honorable ninth dan in Korean martial art Taekwondo. In 2011, Vladimir Vladimirovich put on skates and started playing hockey. He likes fishing. 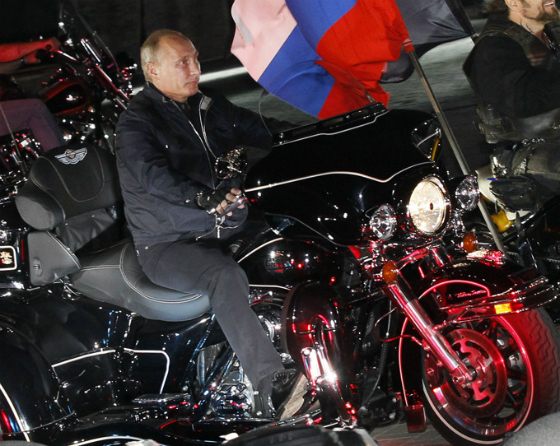 Putin on Harley-Davidson
With pleasure, he listens to the songs of Nikolai Rastorguev and the «Lube» band, Grigory Leps, gypsy music.

He speaks fluently in German and English.

Vladimir Putin wears a watch only on his right hand/ Why? «So the crown does not rub my hand, that's the whole secret»,- The president revealed the secret that many were interested in.

The president has many pets, almost all are gifts from influential politicians. Vladimir Vladimirovich has the Bulgarian Shepherd Dog Buffy (the gift of Bulgaria's premier Boyko Borisov), Akita Inu Yume (the gift of the governor of Akita Prefecture Norihisy Satake), and the goat named Skazka (Yuri Luzhkov gift) and the dwarfish Horse Vadik (a gift of Mintimer Shaimiev, the President of Tatarstan). Previously, the president's favorite dog was a black Labrador named Connie, who died in 2014. 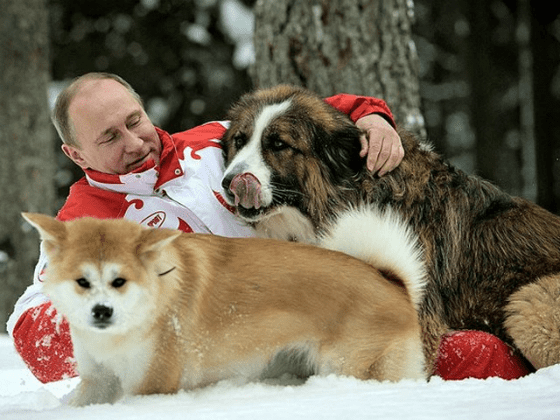 After one week a Parlament deputee and the first woman in the space Valentina Tereshkova suggested to "erase" previous Putin's presidential terms to allow him to became a president in 2024 and in 2030. Putin said, that he doesn't mind, if only the Constitutional Court won't be against. The Constitutional Court didn't mind. Russians called Putin's trick "a zeroing".
ZoomBoola.com

In children`s library of Tula, saints Putin and Medvedev have appeared 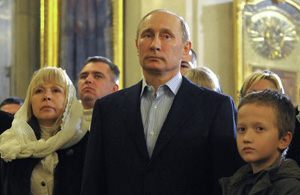 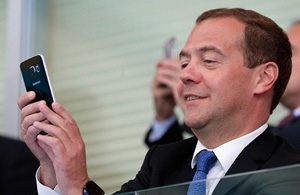 The head of the government Dmitry Medvedev signed a decree regulating mortgages to families with many children.
2
26696
Read more
Poklonskaya Did Not Agree with Putin 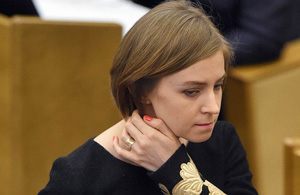 The Deputy of the State Duma Natalia Poklonskaya, who stopped her attacks on the movie «Matilda», decided to comment on the recent statements of the...
2
27333
Read more
Putin`s Campaign Headquarters Will be Opened Next to the Kremlin 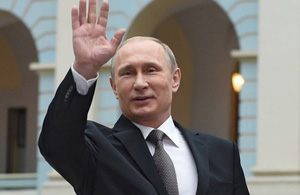