Tegan Lauren-Hannah Murray is the star of the iconic Game of Thrones series, musical God Help the Girl, dramas Skins, Womb, Chatroom and Bridgend, the holder of the prestigious BAFTA Audience Award (the British equivalent of the American Emmy); she’s received film festival awards such as the TriBeCa in New York, Evolution in Mallorca, as well as Best Actress category at the Ourense Independent Film Festival, and the Sundance grand jury prize. Her net worth is about $1 million. 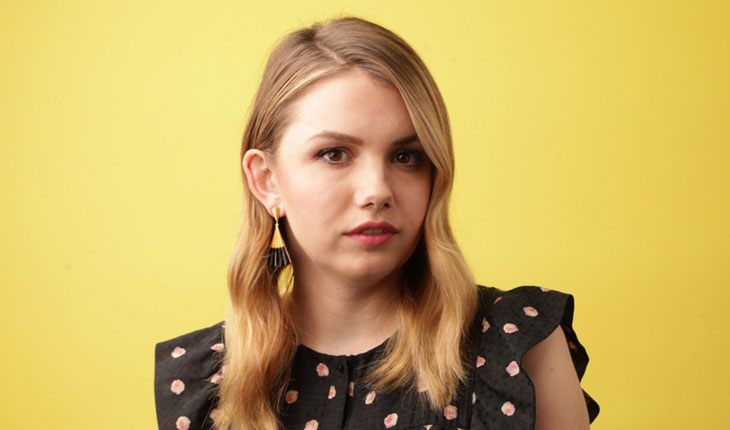 The future film star was born on July 1, 1989, in Bristol, England, where she spent her childhood. She was brought up in the family of local university professor Martin Murray and Rosemary Silvester, laboratory assistant at the Chemistry department of the same institution. 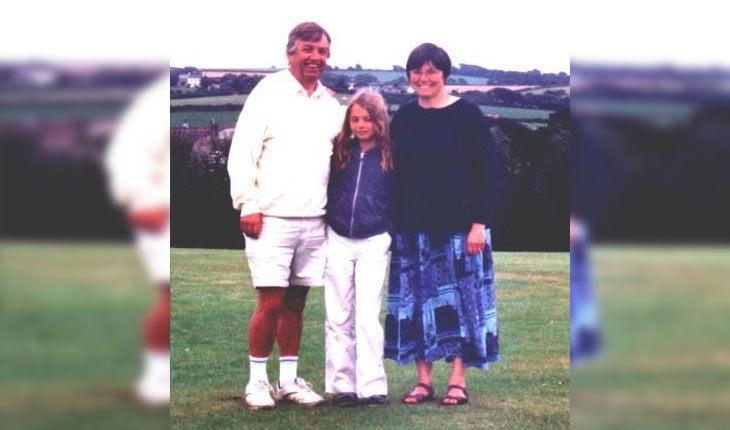 Hannah Murray with her parents
Being a single child, she first attended a public boarding school, and later on, she received her higher education diploma in the English Language, at Queen’s College, Cambridge. 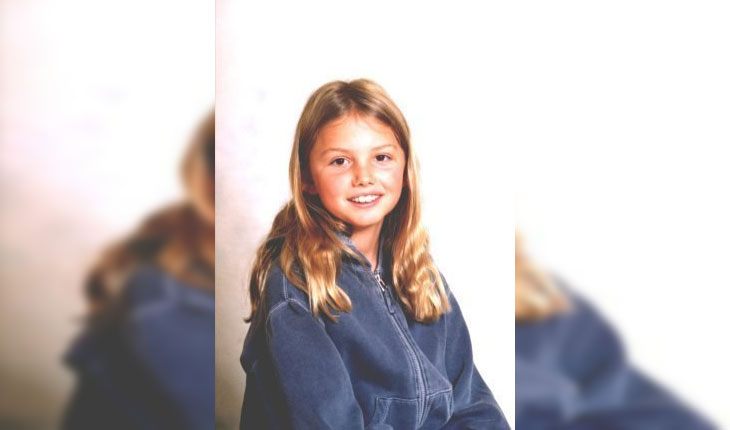 Hannah Murray in her childhood
It’s also known that as a teenager, Hannah was attending workshops and participated in different plays set up by the country’s biggest youth theater ‘North Bristol Post 16 Centre’.

At the age of 17, Hannah found out that there were auditions held in her town for the teenage series Skins, decided to give it a try and she’s had quite the impression on the producers. She got one of the leading roles, the one of Cassie, a girl dealing with different psychological issues. In 2009, her astonishing transformation and portrayal of the complex character earned her a BAFTA award. 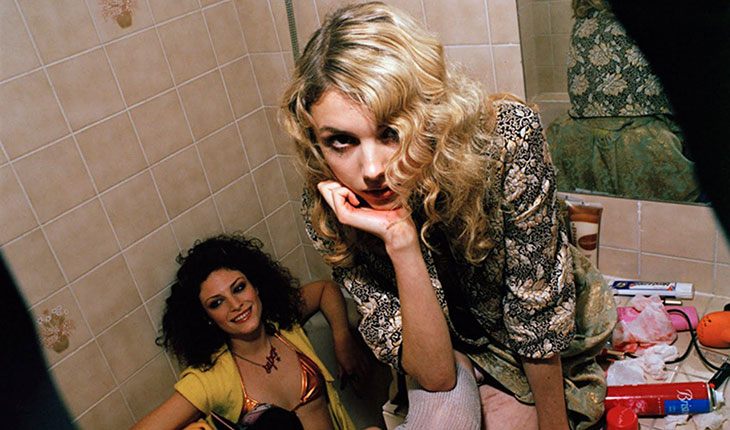 Hannah Murray in Skins
After starring in 19 episodes, Murray decided to abandon the project in order to move on and develop professionally. However, later on, her heroine was among the few characters in the series whose story was continued by producers, and she came back to star in two episodes of the final 7th season.

In May 2008, she made her debut in drama, which offered her a considerable career boost and she received high praise in the press. She played the role of Mia, at Duke of York’s Theatre, based on the play That Face written by 19-year-old Polly Stenham. 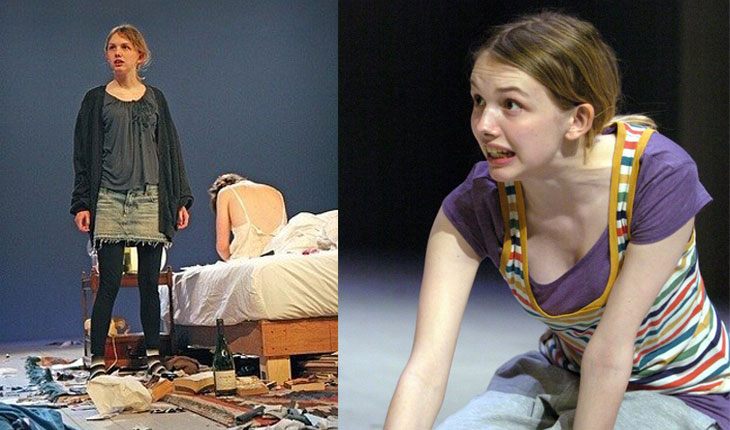 Hannah Murray in That Face
According to Zoomboola.com, a year later she took up the role of Dorothy and appeared in one of the episodes of the series Agatha Christie’s Marple with Julia McKenzie, based on the detective Why Didn’t They Ask Evans?. In 2010, she appeared in three more projects: Above Suspicion: The Red Dahlia, Womb and Chatroom, where she played the leading roles, a girl named Emily. The plot tells the story of a group of teenagers – Jim (played by Matthew Beard), Eva (Imogen Poots), Mo (Daniel Kaluuya), and Emily, who meets a guy named William (Aaron Johnson) online, completely oblivious to the fact that he’s pushing people to commit suicide. The movie got lots of praise from critics and viewers alike. 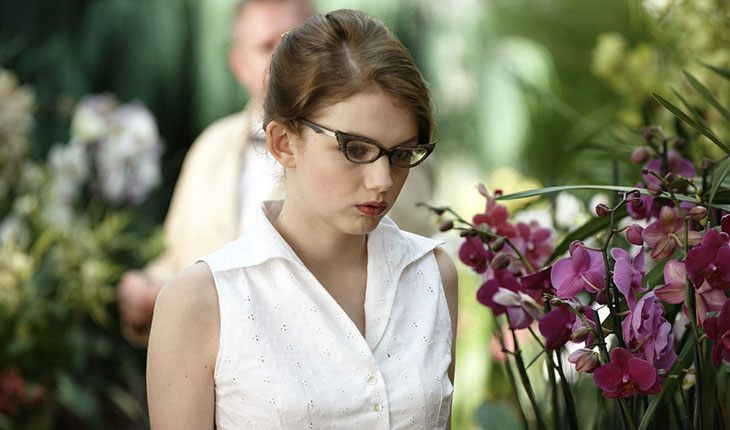 Hannah Murray in Agatha Christie’s Marple
In 2012, the horror-comedy film Dark Shadows was released, where the actress was playing the role of a hippie chick named Caroline, a member of the Collins descendants. She co-starred with Michelle Pfeiffer, Johnny Depp and Eva Green.

The same year Hannah joined the acting crew of the famous ‘Game of Thrones’ series in its second season, playing the role of young Gilly, who has had a rough time living beyond the Wall, namely she was being abused by her own father which resulted in her giving birth to his child. 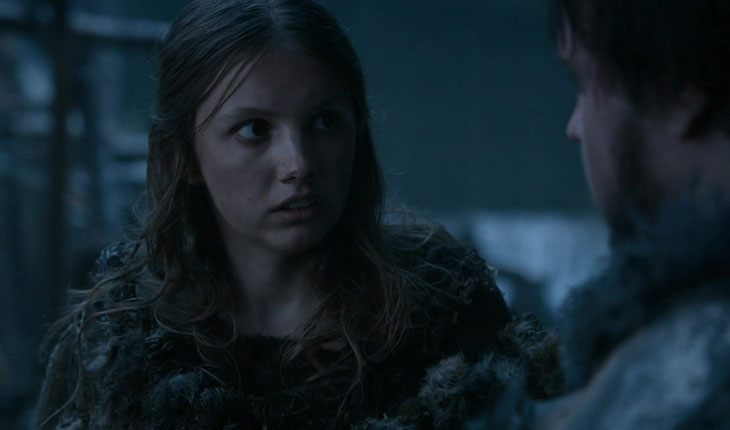 Hannah Murray in ‘Game of Thrones’
Hannah’s character shows up in the second season and her storyline goes on up until the final episode. Her co-star was John Bradley, who played the role of a timid intellectual named Samwell, with whom her heroine managed to have a really beautiful friendship.

In 2013, combining the filming for one of the most popular contemporary series, she made an appearance in the role of Rachel in the action movie The Numbers Station with John Cusack. He played the key role of a CIA agent who saved Hannah’s heroine’s life.

During the same period, Murray appeared in the music video to the song Your Cover’s Blown by the popular Scottish band Belle & Sebastian from the album The Third Eye Centre.
Hannah Murray appeared in the music video of Belle & Sebastian Your Cover’s Blown
After a year, Hannah surprised her fans with the leading role in the comedy film ‘God Help the Girl’, after which the media proclaimed her the ray of hope of British Indie film. They’re referring to the pop-indie musician with a project of the same name, the founder of Belle & Sebastian - Stuart Murdoch, who first stepped in as a producer and screenwriter. 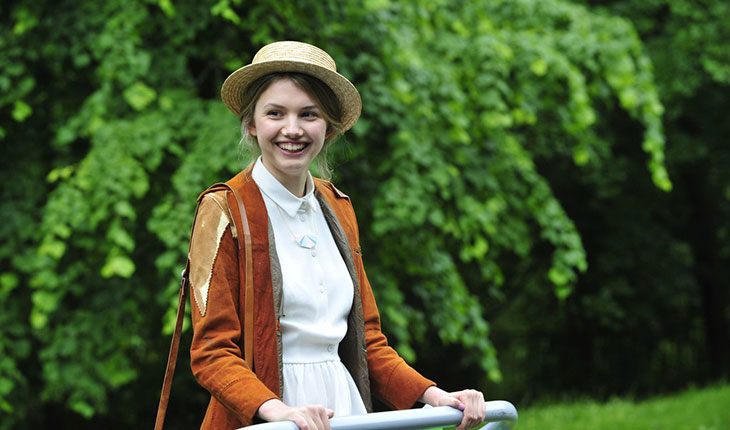 Hannah Murray in the movie ‘God Help the Girl’
The musical itself also involved concert and studio videos of his band with different vocalists. The drama debuted in January at the Sundance festival, where the actress and her co-stars (Emily Browning, Pierre Boulanger, and Olly Alexander, received the grand jury prize.

Also in 2014, while still filming for ‘Game of Thrones’, Hannah played the main role in the play ‘Martine’ by the French playwright Jean-Jacques Bernard, the representative of the movement known as the art of the unexpressed. Her performance, solely relying on mimicry, gestures, and silence to express emotion, was appreciated with a nomination for the award of the independent London theaters Off West End Awards in the category Best Female Performance. 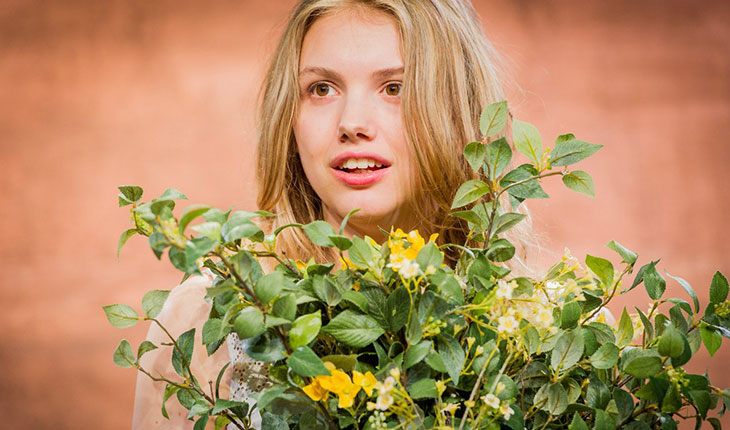 Hannah Murray in ‘Martine’
In 2015, the British actress appeared in the independent American movie ‘Lily & Kat’, where her protagonist was facing the crisis of adulthood. The movie told the story of two inseparable friends (portrayed by Jessica Rothe and Hannah), and how one of them decided to go to England for a couple of days. Before the departure, the girls decided to enjoy the nightlife in the company of a mysterious artist (Jack Falahee).

That’s when the Danish movie ‘Bridgend’ came out, based on the real-life teenage suicide cases in the town. The transformation of Hannah into the movie’s heroine named Sara was highly appraised at the premiere, which was held at the TriBeCa Film Festival, earning her an award for the best female role. She was also proclaimed as Actress of the Year at the Palma-de-Mallorca and Ourense festivals.
Hannah Murray in ‘Bridgend’
In 2016, yet another movie was released where she starred - the Spanish war drama ‘The Chosen’, based on the murder of Leon Trotsky. She played the role of Sylvia Ageloff, secretary of the Flying Dutchman of worldwide revolution, the bride of his murderer, though she was not tied to the crime anyhow. 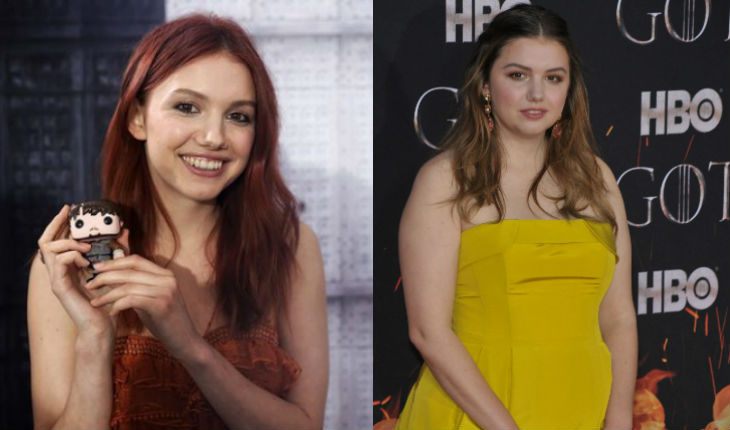 Hannah Murray in seasons 2 and 8 of ‘Game of Thrones’
One year had passed and you could already see her in the role of Julie in the crime drama ‘Detroit’, where she co-starred with Will Poulter, John Boyega, Algee Smith, and Kaitlyn Dever. The movie was based on the uprising from 1967 in the city of Detroit.

There’s not much to talk about in her private life. Rumors had it that she was dating her ‘Game of Thrones’ co-star John Bradley, and even that she was pregnant because she had gained some weight towards the end of the series. 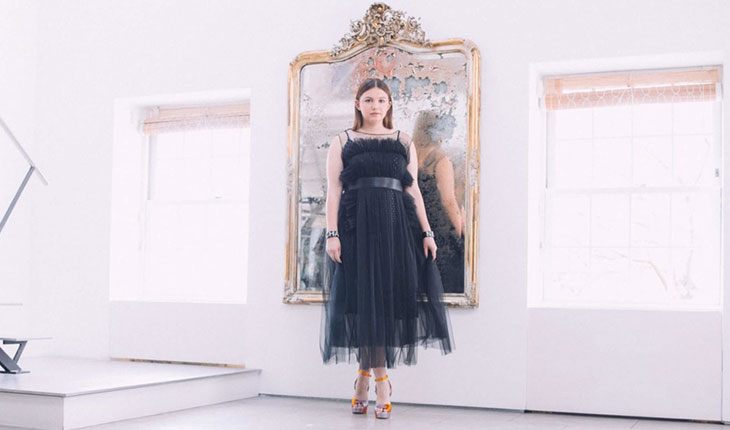 Hannah Murray had gained some weight towards the end of ‘Game of Thrones’
Further on, some information surfaced online that she was in fact dating her other ‘Game of Thrones’ and ‘Skins’ co-star - Joe Dempsie. However, there’s still no proof of that.

The actress is a convinced vegetarian.

She appeared in the movie ‘Charlie Says’ released in 2019, which tells the story of Charles Manson (played by Matt Smith), the founder of the hippie-commune ‘Family’ and his followers. One of the gruesome murders committed by his ‘family’ was the one of model Sharon Tate (wife of producer Roman Polanski), in her own home while she was 9 months pregnant. They also murdered 8 more people. Hannah delivered an outstanding performance of a girl charmed by a criminal, for whom she abandoned her freedom, personality, name, and all responsibility. 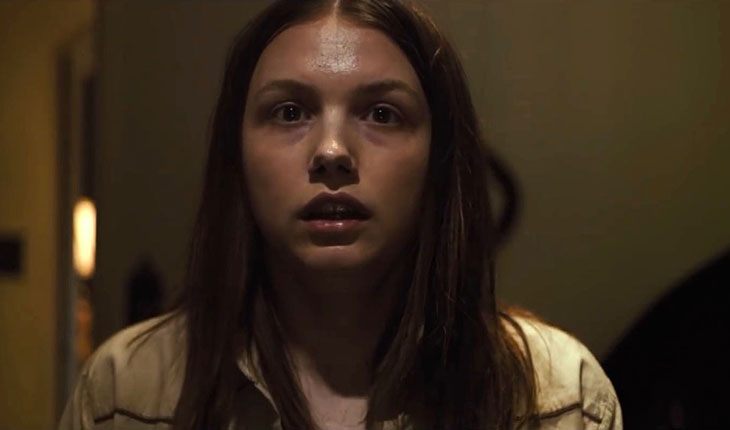 Hannah Murray in ‘Charlie Says’
In the same period, fans saw her portrayal of Gilly, and other characters of that matter, for the last time in the final 8th season containing the last 6 episodes of the fantasy series ‘Game of Thrones’.

In 2020, The Expecting premiered, in which Hannah played Cara. According to the plot of the thriller series, the main character mysteriously becomes pregnant and tries to expose the conspiracy built around her.
The Expecting – trailer

Sarah Paulson how did she became famous
6.0

Robert Sheehan how did he became famous
5.9