Main page
Celebrity News
Dane Dehaan Will Play the Legendary Bandit Billy the Kid
Discuss
A biographical Western with the speaking name «The Kid» was launched in the United States.

It is expected that this will be the story of the short and dissolute life of one of the most famous American robbers and murderers, Billy the Kid. His role will be performed by 31-year-old actor Dane DeHaan. In addition, the film will star Chris Pratt.

Billy the Kid was born in New York in 1859 and robbed in the state of New Mexico. He was the leader of his own small gang, which had committed robbery and murder (and, as evidenced by one of his two surviving photos, his leisure was playing cricket). 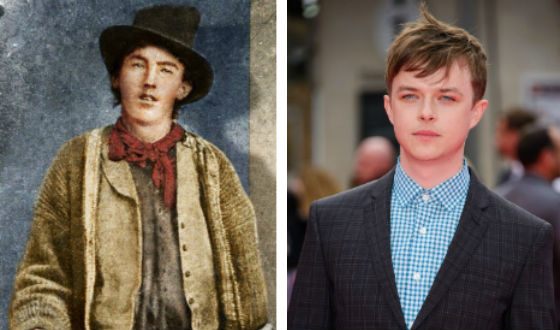 Billy the Kid and Dane Dehaan
It was believed that he killed 21 men, but later it was found that on his account are no more than nine deaths, four of which he caused by his own hands. Reporters were informed that he was a little, ruddy, blue-eyed, and charismatic young man. However, he hides his cruel nature under the comely appearance. Billy the Kid became a legend after his death when the Sheriff of Lincoln in New Mexico wrote the book about him (he, in fact, killed Billy the Kid).

Dane Dehaan will play Billy the Kid. It is impossible not to mention the amazing likeness of actor and character, even without makeup.

Steven Spielberg who is his father
6.0