Hillary Rodham Clinton is one of the most influential women in politics in the whole world. Since 1968 she has been supporting the U.S. Democratic Party. From 1993 to 2001 she served as the First Lady as the wife of Bill Clinton, the 42nd President of the USA. From 2009 to 2013 she served as the Secretary of State in the White House. She was also Donald Trump's main rival in the elections of the 45th President of the USA. 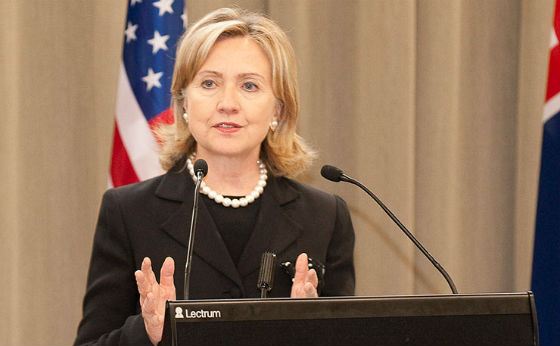 The USA Also Has Its Own «Iron Lady», and Her Name Is Hillary Clinton

Hillary Clinton was born into a conservative family that was a member of the United Baptist Church in Chicago. Her father, Hugh Ellsworth Rodham, had his own textile business and her mother, Dorothy Emma Rodham, was a homemaker. Hillary was the first child, but very soon the family had two boys, Hugh and Tony. In 1950, after the birth of the younger boy, Hugh, the Rodham Howell family moved from Chicago to a suburban town of Park Ridge.
A Family Photo Archive of Hillary Clinton
When Hillary was little, she didn't even dream of becoming a politician. She was dreaming about space; she even wrote a letter to NASA in which she shared her dream of becoming the first woman in space. Here is an answer that she got, «We don't take women». 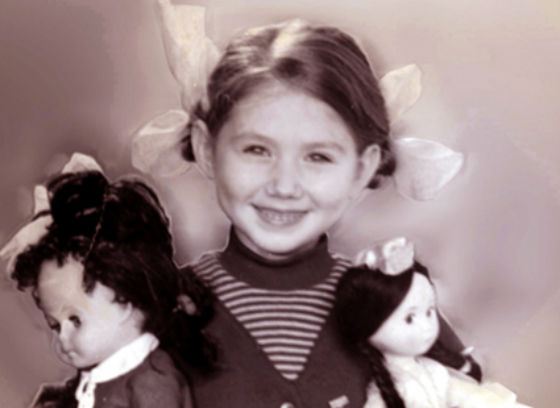 When Hillary Clinton Was Little, She Was Dreaming about Space
School yearbooks of the future Mrs. Clinton consisted of excellent grades, active involvement in the religious and social life of the town, presidentship in a number of school clubs, and help in the election campaign of a Republican, Barry Goldwater. In 1965, Hillary graduated from high school and became the finalist of a state program for gifted students. This achievement gave her an opportunity to choose any of 1600 universities, participating in the program. Hillary chose the Women's Wellesley College whose students studied liberal arts. She opted for a political course. 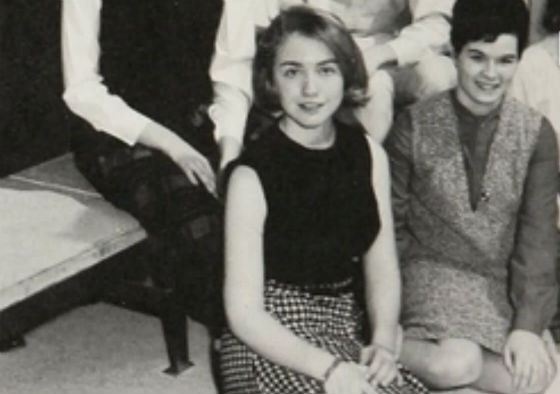 Back in High School, Hillary Was the Best Student and Social Activist
Interestingly, in the beginning, Hillary held conservative political views. Back in college, she served as the president of the Wellesley Young Republicans. In 1968, Hillary became the president of the State Wellesley Association. At that time, she started doubting in her political course; as she said later, she had Conservator's mind, but the Democrat's heart. 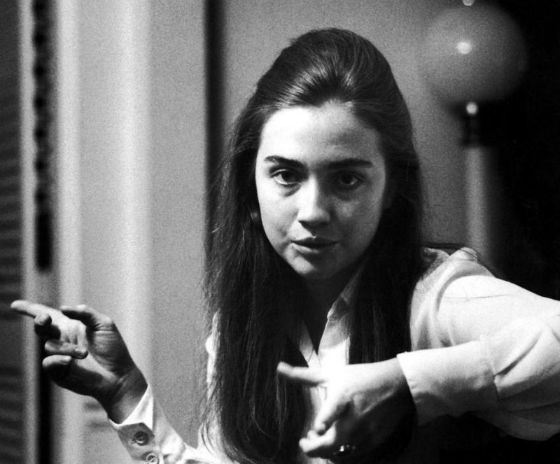 In 1969, Hillary received a bachelor's degree in political science. Her next step was Yale Law School. There, she met her future husband, Bill Clinton. 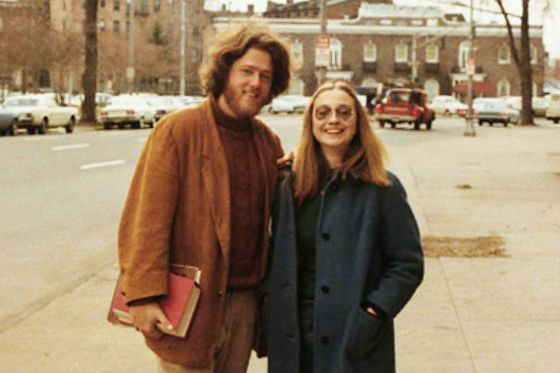 Young Bill and Hillary Clinton (1971)
In 1973, she received a long-awaited doctor's degree in jurisprudence, but it was early to say goodbye to Yale: the following year she devoted herself to a holistic medicine course in a specialized Alma Mater training center. After finishing the course, she received a lawyer position in a Children's Defense Fund. 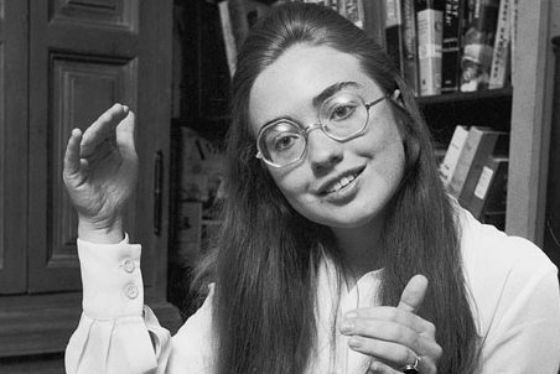 Hillary Clinton Is a Lawyer, Political Scientist, and Children's Rights Defender
In 1974, 27-year-old Hillary became a member of a legal commission that worked on an indictment of the Watergate scandal. The activity of the organization contributed to the retirement of the President, Richard Nixon. 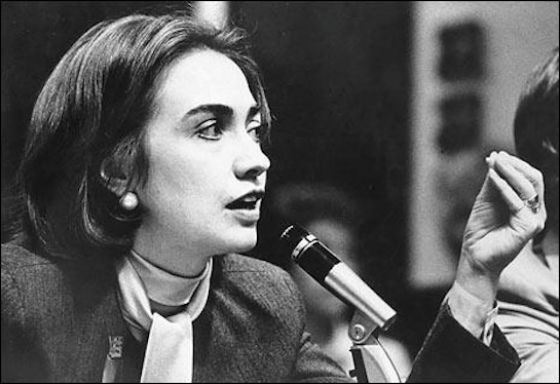 In 1974, Hillary Clinton's Activity Contributed to the Retirement of Richard Nixon
In that same year, Bill moved to Arkansas where he wanted to start his political career and Hillary followed her love. In 1975, the couple tied the knot. 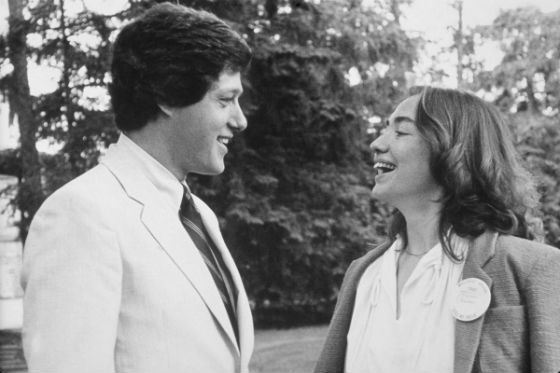 Hillary and Bill Continued Their Political Career under the Same Last Name
After their wedding, Hillary Clinton worked as a jurist in the University of Arkansas, and in 1976 she accepted an offer to work for a Rose Law Firm specializing in patent legislation. At that time, Bill was running for the Arkansas Attorney General and a number of successful election campaigns organized by his faithful wife earned him the victory. 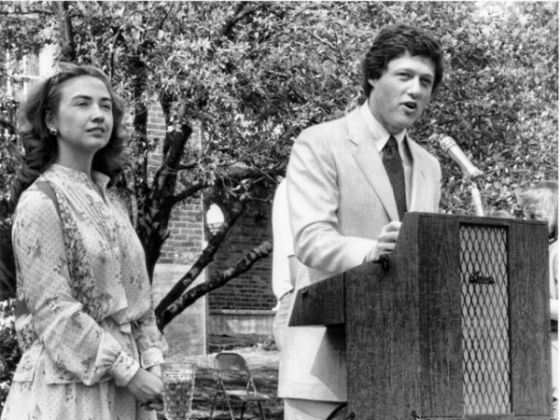 Hillary Clinton Always Supported Her Husband
In 1978, outstanding analytical abilities earned Hillary a seat on the board of the Legal Services Corporation. She was appointed by the Sitting President, Jimmy Carter. She had been holding this post to 1980. During that time she increased the financial fund of the company from 90 to 300 million dollars.

In 1979, Bill Clinton became the Governor of Arkansas and Hillary became the First Lady of the state. First of all, she took the Arkansas Educational Standards Committee under her wing: she set standards of school schedules, size of classrooms, and issued a law requiring teachers to take competency testing. In addition to the protection of children's rights, a problem of gender inequality also disturb Hillary. She was trying to solve it as a member of the board of directors of the American Bar Association by lobbying the interests of female lawyers. 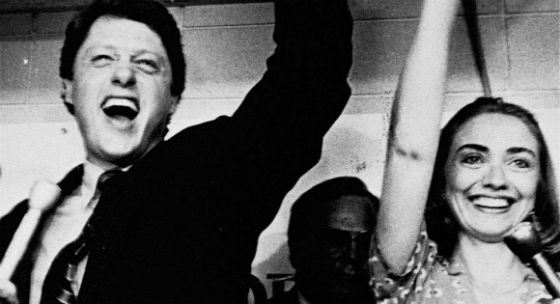 The Clinton Family Celebrates Elections Victory for the Governor of the State
In 1992, Bill Clinton announced his decision to run for the President of the USA from the Democratic Party.

The Wife of the President, Bill Clinton

On January 20, 1993, Bill Clinton began to settle in the White House where he had gotten into with the enormous support of his wife who was helping him with the analysis and planning of his election campaign. Voters used to call Hillary the «co-president» for her active participation in the election race and her teeming political activity as the First Lady of the USA. 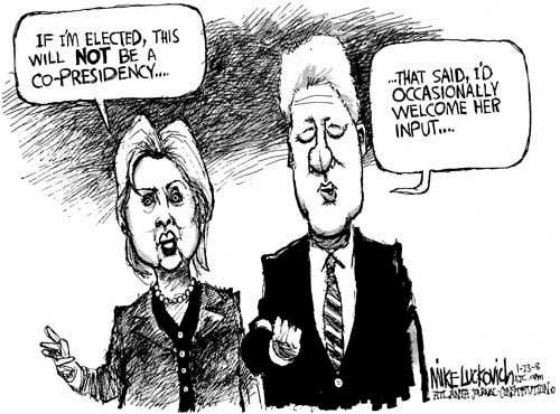 "If I Win, It Won't Be Co-Presidency"
First of all, Hillary needed to carry out national healthcare reforms. In 1993, the government approved a detailed package developed by her which is known as «The Clinton Health Care Plan». According to that plan, every employer had to provide health insurance for its employees. A year later, the criticism of the Republicans suspended the program. 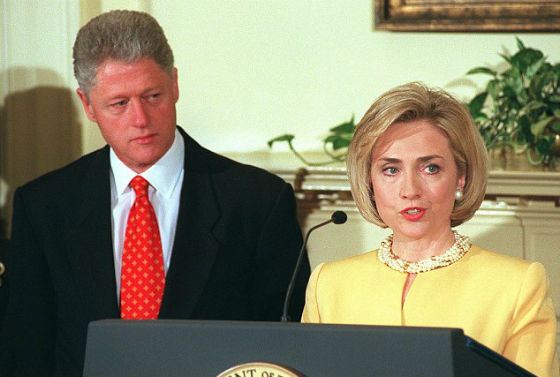 Hillary’s New Health Care Program
Failure of the program declined the attractiveness of the Democrats and increased support for the Republicans. The number of Republicans increased in the Senate and the White House. Hillary's part in making political decisions weakened considerably.

In 1994, the Clinton family was involved in the case of the Whitewater Corporation. They were suspected of financial fraud. By serving as the Governor of Arkansas, Bill Clinton invested money in a construction company that soon lost everything, and the total losses were around 45 million dollars. Clinton himself also lost a considerable amount of money (around 70 thousand dollars). However, it didn't save him from charges. Bankrupt investors believed that the Governor had to monitor the activities of that company. The fact that Hillary worked for a legal firm, serving the Whitewater, only added fuel to the fire. 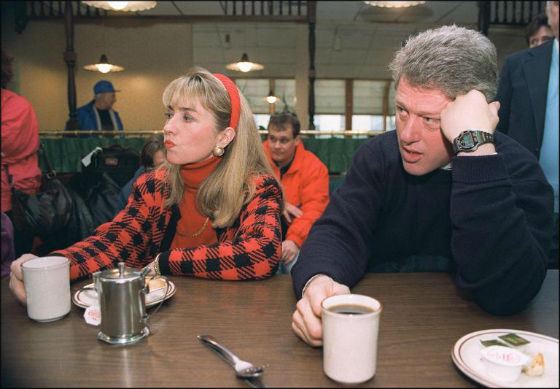 The Clinton Family after the Proceeding
Suspicions were never proved. At the very least, the court didn't have evidence linking the Clinton family to any frauds. However, right after this scandal, new provocative titles appeared in newspapers that said: «Bill Clinton Slept with Monica Lewinsky!» 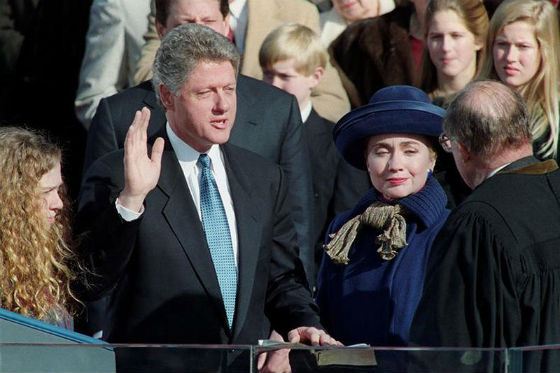 The Second Inauguration of Bill Clinton Took Place Right before the Monica Lewinsky Scandal
The story was as old as the sea: the young intern, Monica Lewinsky, was trying to get the President's attention and finally, she did it. From November of 1995 to March of 1997 she was having an intimate relationship with Bill Clinton. Later the woman was transferred to the Pentagon. President's secret would remain unnoticed if it weren't for Linda Tripp who made public a recording of a phone conversation in which her friend, Monica, shared details of her love affair with Bill Clinton. 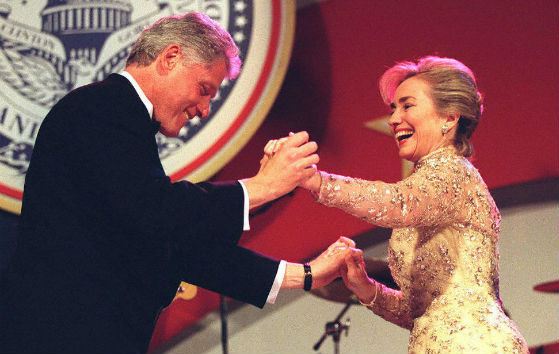 Hillary Supported Her Husband and Accused Monica of Slander
Hillary Clinton supported her husband even in that situation by saying that the whole scandal was arranged to conspire against the President. Later, he confessed in his relationship with Lewinsky and left the position of the President after an attempt of impeachment.

Hillary's persistence saved her from following the examples of Barbara Bush or Nancy Reagan who left politics and started running charity funds. She wasn't like those women, and in 2000 she runs for the Senator from New York and won the elections. That's when her harsh and strong-willed side which had been hiding behind her husband was revealed. 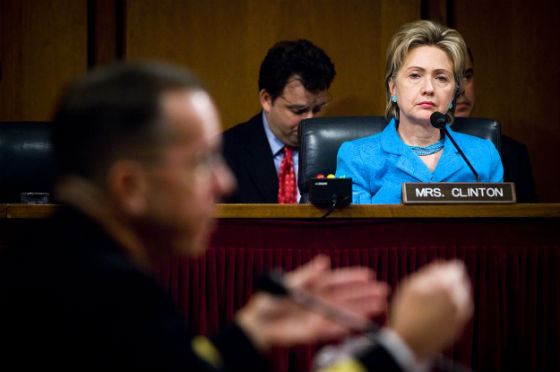 Hillary Clinton in the United States Senate
She was very determined and aggressive about all issues of control of terrorism and military policy. That's why her colleagues started calling her a «hawk». In autumn of 2002, she voted for a war with Iraq, and in 2005 she didn't support the withdrawal of troops from hot spots. 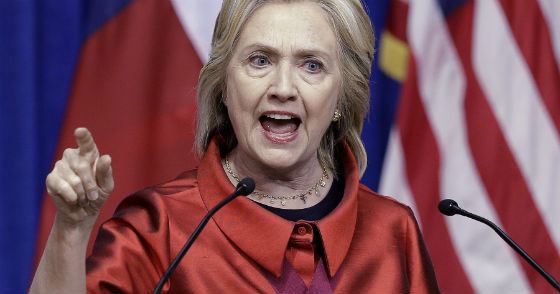 Hillary Clinton's Political Views Are Different from Her Husband's Views
In 2007, Hillary Clinton started her election campaign. Everything predicted phenomenal success: the female Senator was a leader of all ratings and surveys as the most recognizable candidate. The whole world was looking fixedly at the situation and compared Clinton to Angela Merkel. However, after a series of primary elections, Hillary gave leadership to a young candidate, Barack Obama, who won the presidential elections in 2008. 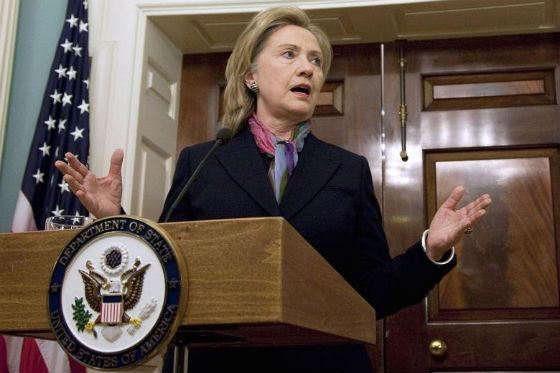 Hillary Clinton Served as the United States Secretary of State
After the victory, Obama offered Hillary the position of the United States Secretary of State. The Senate accepted her candidacy, and in 2009 she came to office. By serving as the Secretary of State, Hillary supported the increase of military presence in Afghanistan and Libya, approved the Arab Spring, and especially the bombing of the positions of Gaddafi's army. On February 1, 2013, Clinton stepped down and dropped the reins of government to John Kerry.
Hillary Clinton on Ellen's TV Show
In April of 2015, Hillary Clinton shared about her intention to participate in the presidential elections from the Democrats. According to the results of the primary elections that took place at the beginning of 2016, the woman became one of the leaders of that election race. She was on an equal basis with Donald Trump, Ted Cruz, and Bernie Sanders. 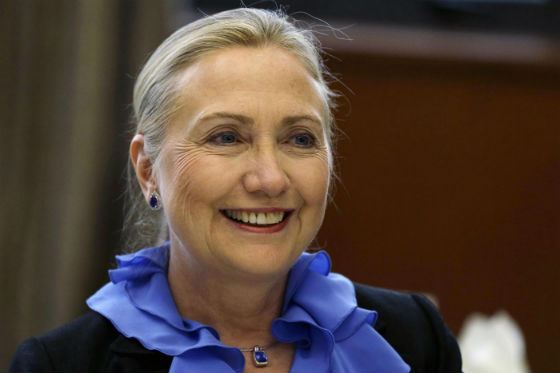 Hillary Clinton during the Elections of 2016
A few months before the final voting that took place on November 8, 2016, there were no doubts about her victory. Even the most conservative residents of America believed in her victory. That's why Trump's victory became such a shock. The oligarch and developer won 276 electoral votes, and Hillary Clinton only won 218 votes. After the announcement of the results, she called the winner and admitted her defeat. 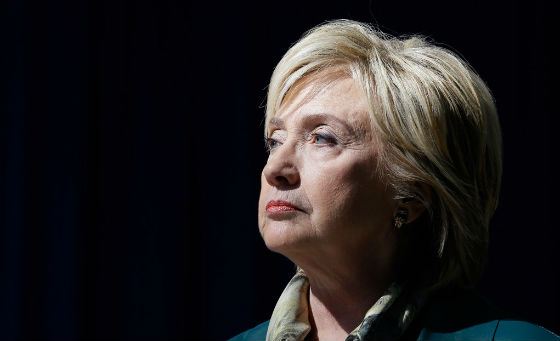 The future Mrs. Clinton met her husband at the library of Yale University in 1971. Their passion for politics and jurisprudence turned into a wild love affair that ended with a solemn ceremony and marriage vows. 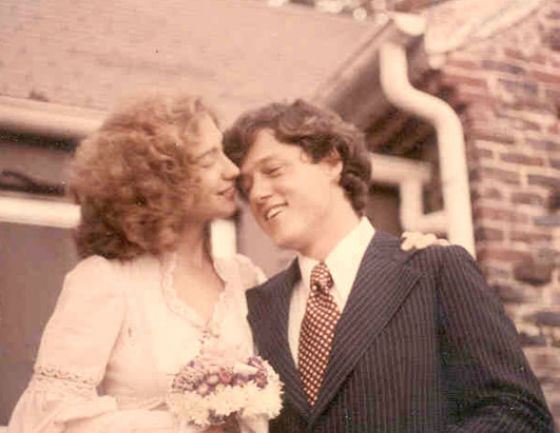 Bill and Hillary Clinton's Wedding
In 1980, they had a baby girl, Chelsea Victoria Clinton. Because of stress caused by a busy work schedule, Hillary gave birth to their daughter three weeks ahead of time. 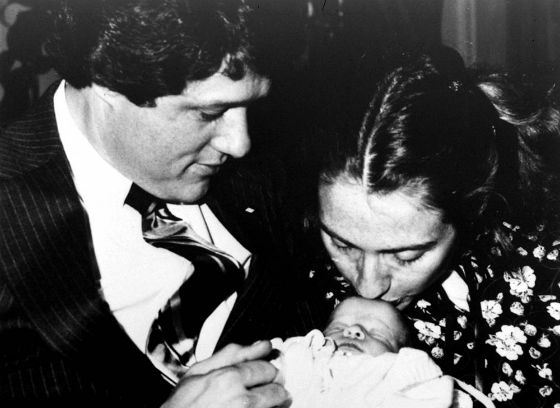 A Newborn Chelsea Clinton
Bill and Hillary tried to be an ordinary American family; they even refused to have pompous lunches in the dining room of the White House. They preferred cozy family evenings at their kitchen, reading books, playing table tennis and cards. 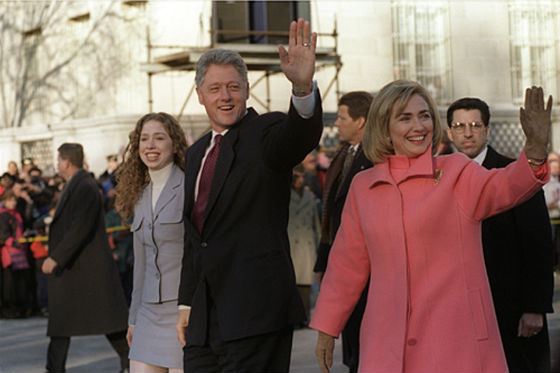 Hillary Clinton with Her Family
Neither a succession of scandals, including the sensational story with Lewinsky, nor the attempt of Bill's impeachment, nor Hillary's career couldn't break the couple. 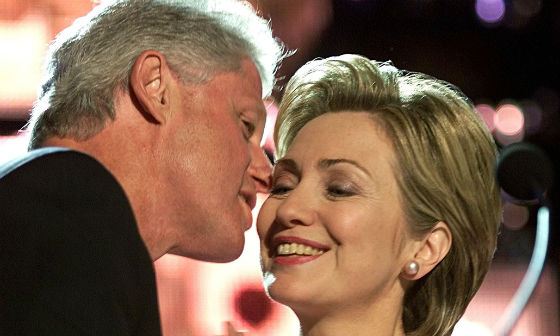 Bill and Hillary Clinton Are Still Together
In September of 2014, Hillary Clinton became a happy grandma. Chelsea and her darling, a banker Marc Mezvinsky, had a daughter, Charlotte. 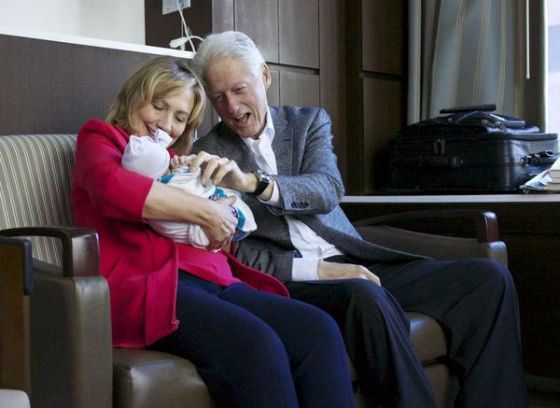 Hillary Clinton with Her Husband and Their Granddaughter, Charlotte

In March 2019, the former US Secretary of State announced that she had no plans to run for President of the United States in 2020. In December of the same year, Hillary approved the impeachment procedure for Donald Trump but noted that she considered this measure to be extraordinary. Clinton later said that the incumbent's policies were betraying the country and posing an obvious danger to the values that make Americans strong and free.
Sec. Hillary Clinton on Trump-Biden Debate
On January 2, 2020, Hillary Clinton was appointed Rector of Queens University Belfast for a five-year term, becoming the first female rector in the history of the university, founded in 1845. In early 2021, it became known that Hilary the Cleitriller was working with the writer Louise Penny. A book entitled the State of Terror is slated for release on October 12th. The main character will be the Secretary of State, who was recently appointed to this position.