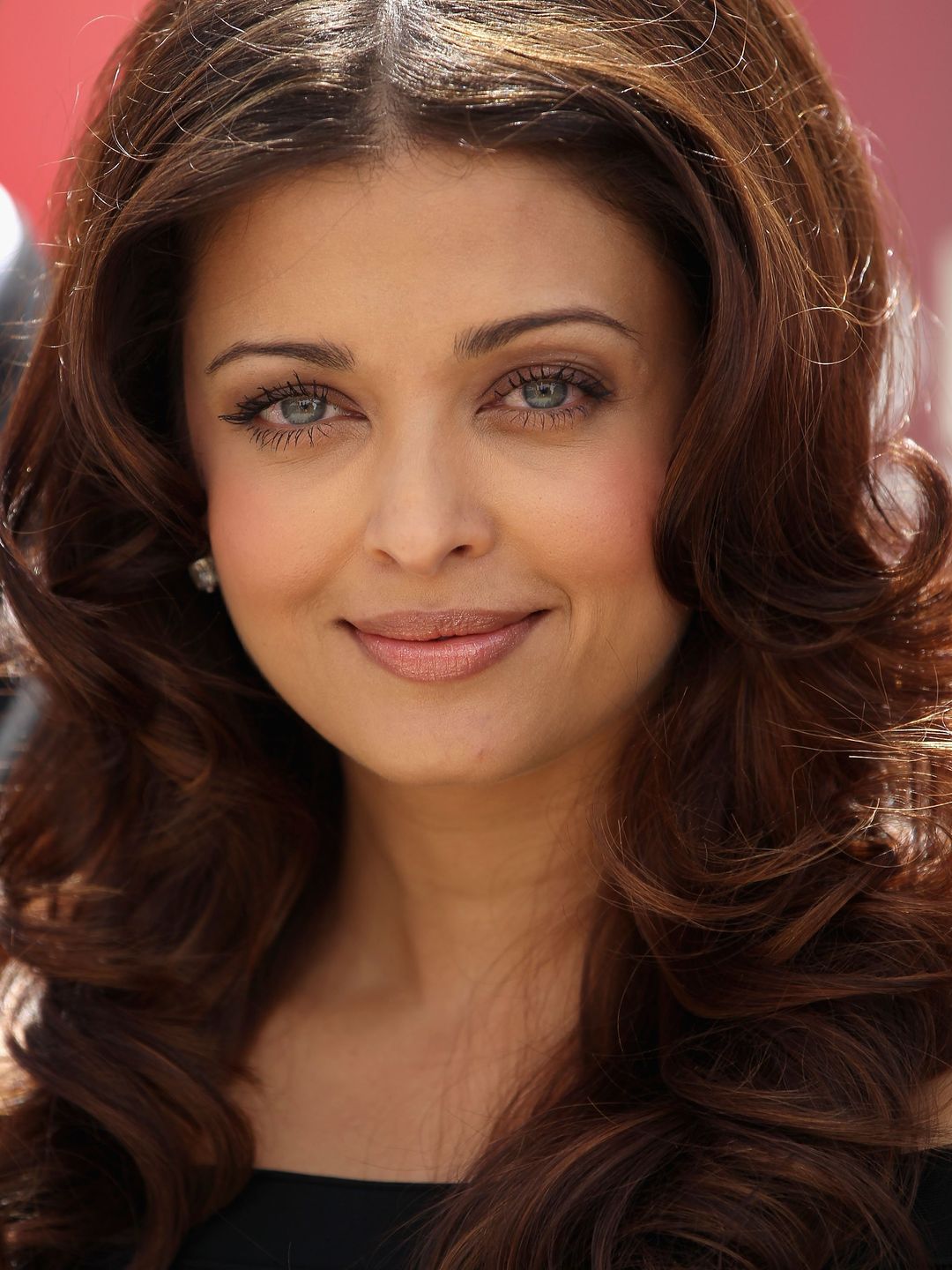 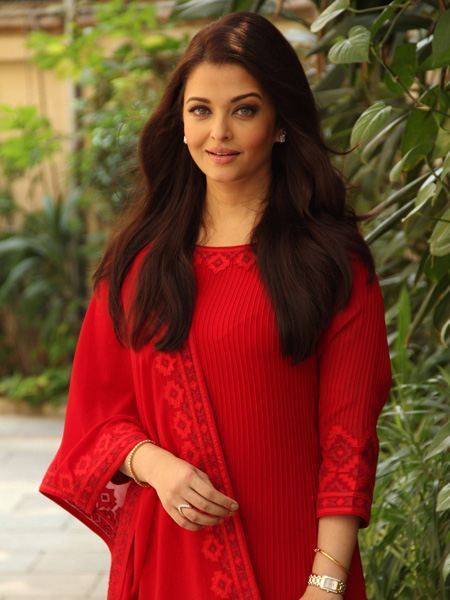 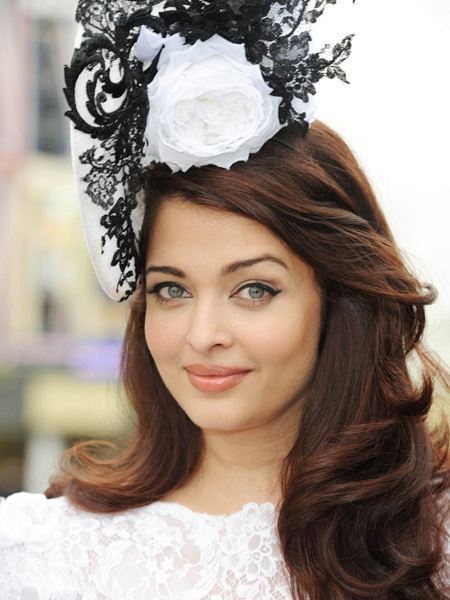 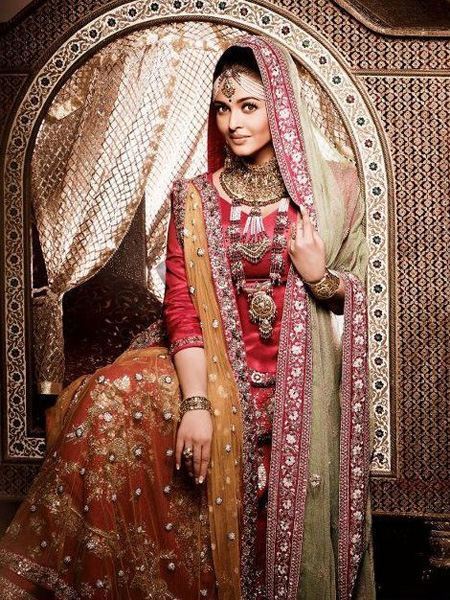 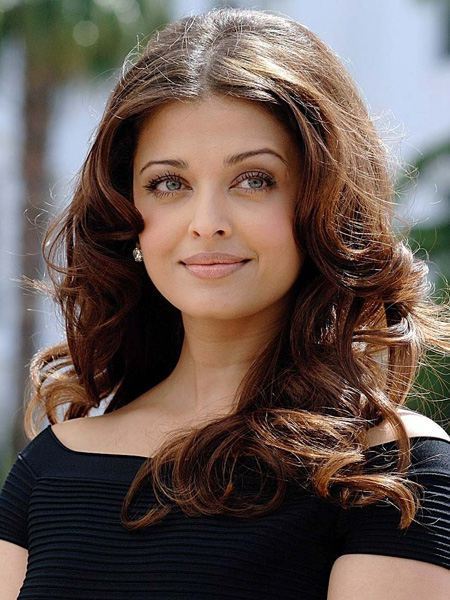 Aishwarya Rai is an Indian actress and model, one of the most beautiful women on the planet. During her creative career, she played dozens of various roles, but the actress says that her best role is being a wife and mother. Net worth: $35 million. 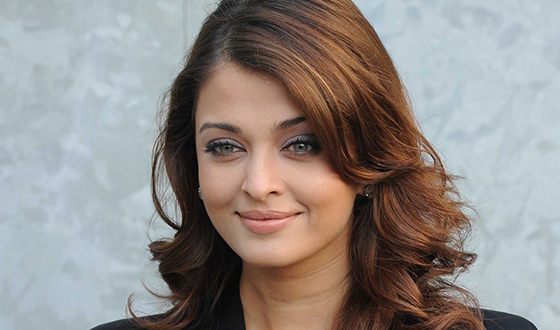 In the photo: Aishwarya Rai Bachchan

The Queen of Indian Cinema was born on November 1, 1973, in the administrative center of Mangalore, Karnataka. Her father, Krishnarai Rai, was a military biologist, while her mother was engaged in literary activity. Aishwarya grew up with her older brother, being brought up in an education system typical for intellectual Indian families, which included, apart from regular schooling, the study of national traditions and history, as well as music and dance. 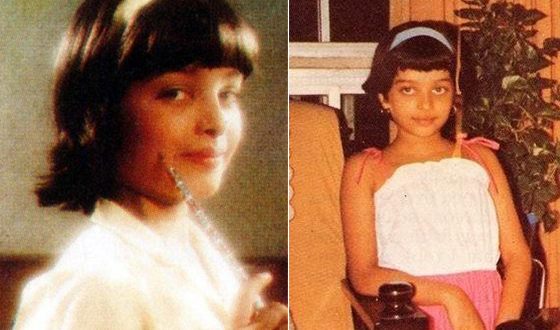 Aishwarya Rai as a child
Aishwarya spent her childhood and youth in Bombay (now Mumbai) where her father got a place in a research institute. 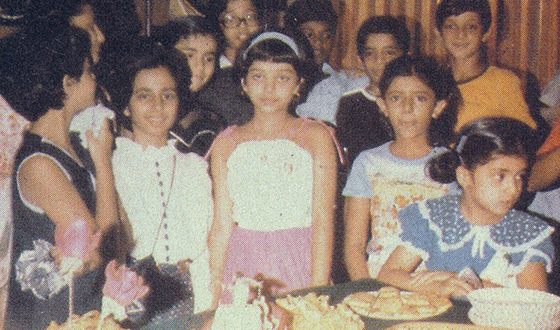 Aishwarya Rai (center) in her school years
After school, the girl, who was already impressing by her extraordinary beauty, became a student at a private college, and after graduation, entered the architecture program of the National University of Arts.

According to Zoomboola.com, in 1991, she agreed to work as a model, which is why she had to leave her university studies. First, Aishwarya was filmed in advertising, represented local cosmetics companies, and participated in beauty pageants. Having become the winner of regional pageants several times, in 1994 she agreed to become a contestant in Miss World. 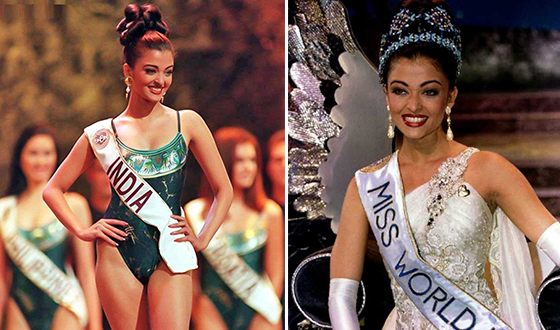 Aishwarya Rai at a beauty pageant
The beauty contest was held in South Africa, where Aishwarya became the winner, being crowned Miss World, as well as Miss Photogenic. In a diamond-studded crown, the girl returned to her homeland, where her victory became a national holiday.

Career. The beginning of Bollywood fame.

The Queen of Beauty film debut took place in 1997 in the drama Iruvar, which tells about the difficult relationship between the film star Anandan and politician Selvan. In the picture, the aspiring actress played two roles at once: the village simpleton Pushpavalli and actress Kalpana. Both spectators and film critics received warmly the appearance of the crowned beauty queen in this difficult role and forgave her for the failure of her next film. 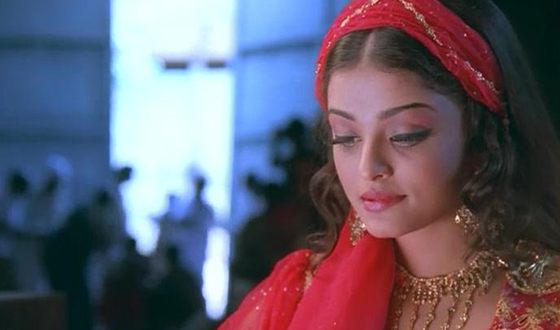 Aishwarya Rai in Iruvar
In the melodrama directed by Rahul Rawail ...Aur Pyaar Ho Gaya, the actress played the role of student Ashi, who, having obeyed the will of her relatives, has to marry someone she doesn’t love. But, as in most Bollywood films, the story ends in a happy ending and lots of dancing: at the airport, the girl meets a guy who pretends to be her fiancé and falls in love with him. The impostor is played by the famous Bobby Deol. Despite the negative reviews and the low rating of the picture, Rai received an award as a promising novice actress.

In the period from 1997 to 2000, the actress starred a lot in India, taking part in the movies Taal, Jeans, Aa Ab Laut Chalen, and others. Aishwarya's filming partners were such stars as Akshay Khanna, Salman Khan, Suman Ranganathan, and Anil Kapoor.

Soon Rai received her first award. Playing the role of Nandini in the melodrama Hum Dil De Chuke Sanam, the actress won one of the most prestigious Bollywood awards for Best Actress - the Filmfare Award. Bollywood film fans consider her duet with Salman Khan one of the most beautiful in the history of Indian cinema. 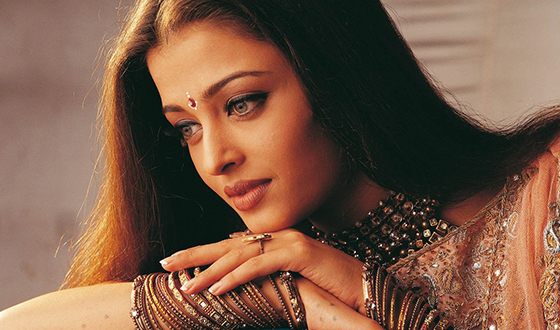 Aishwarya Rai in Hum Dil De Chuke Sanam
Since the beginning of the 2000s, Bollywood cinema has begun to regain its former popularity, largely due to the participation of Aishwarya Rai. Contrary to the envious remarks that claimed that behind her beautiful appearance there was nothing but an empty shell, devoid of talent and determination, Aishwarya improved her acting skills with her every new role, embodying romantic heroines on the screen. The expressive eyes of the actress, her ability to perform complex dance moves, and convey subtle nuances of feelings rewarded her with the deserved fame of an outstanding actress.

The film Josh, released in 2000, became popular in India as well as in other countries. In the film, Aishwarya played the sister of the leader of a youth group, played by the star of Indian cinema Shahrukh Khan. Filming took place on the island of Goa, whose beautiful landscapes were an excellent backdrop for the story, that combined elements of melodrama and thriller. 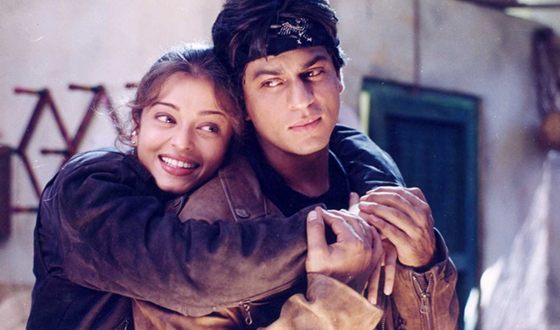 Aishwarya Rai in Josh
In 2002, the actress again worked in a duo with Shahrukh Khan in Sanjay Leela Bhansali’s melodramatic musical Devdas in which Aishwarya and Shahrukh Khan played lovers. Madhuri Dixit, who played a noble courtesan, studded with jewels, who did everything to separate the lovers. Confronted with a difficult choice, Devdas shows weak character and leaves Paro, played by Aishwarya. Portraying the suffering of lovers, the film is considered a benchmark of Bollywood cinema. For the role of Paro, the actress received a second Filmfare award.
Aishwarya Rai and Madhuri Dixit in Devdas
From 2002 to 2004, Aishwarya appeared in more than ten films. The most famous ones are considered to be the role of Suman in the drama Hum Tumhare Hain Sanam, in which the actress starred in the company of Shahrukh Khan and Salman Khan, the role of Sanzhana in the comedy action movie Pyaar To Hona Hi Tha and Neeru in the stunningly beautiful melodrama Raincoat. 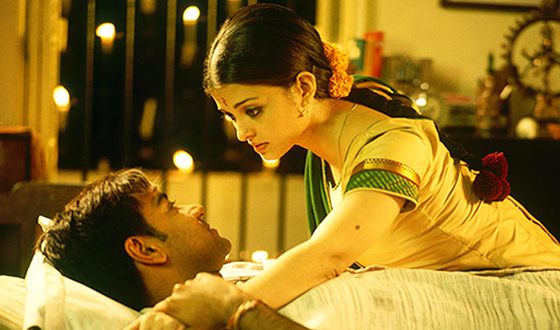 Aishwarya Rai in Raincoat
In the spectacular action movie of 2006 Dhoom: 2, which tells about the adventures of the police officer Jay and his friend Ali, the actress appeared in the shape of a beautiful thief. In the picture, Aishwarya worked with Abhishek Bachchan and Hrithik Roshan. The shooting took place in Rio de Janeiro and gave the picture Latino colors and rhythms.

In the musical comedy which was a joint American-British production, Bride & Prejudice, the actress played the role of one of the four sisters, whose lives are being arranged by the cunning and calculating mother. The vibrant international version of Jane Austin’s famous novel came out in 2004 and was a huge success. The bridegrooms of Mrs. Bakshi’s beautiful daughters (performed by Nadira Babbar) were played by played Nevin Andrews, Martin Henderson, and Daniel Gillis.
Bride & Prejudice - trailer
The 2005 Romantic Story Mistress of Spices did not deserve the accolades of film critics, yet the audience liked it. The national Indian flavor, transferred to San Francisco, did not boast either dances or songs, but the Aishwarya’s embodiment of the protagonist, who reigned over a small shop of spices and seasonings, had a truly hypnotic effect. The actress’s partner was Dylan McDermott. Anupam Kher and Padma Lakshmi also appeared in the film. 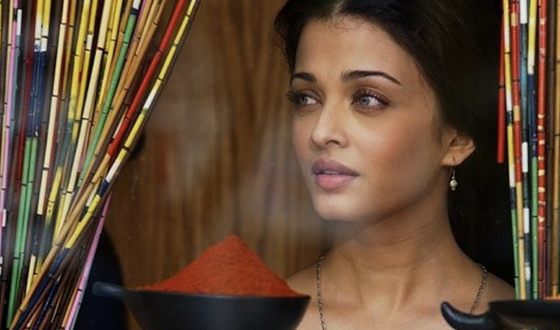 Aishwarya Rai in Mistress of Spices
In 2007, the actress performed the role of Mira in the film adaptation of Valerio Massimo Manfredi’s bestseller The Last Legion. In this large-scale historical drama about the origin of the legend of the ninth legion also starred Colin Firth, Peter Mullan, the British beau Rupert Friend and Sir Ben Kingsley. 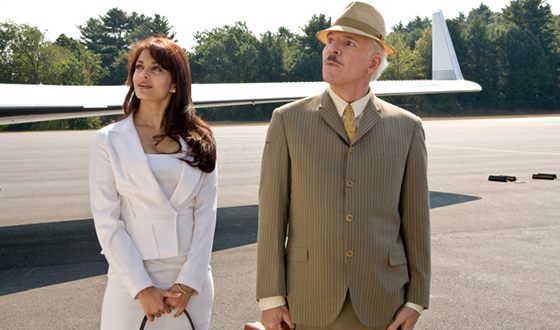 Aishwarya Rai and Steve Martin The Pink Panther 2
The next Hollywood experience of the actress was the role of the forensic scientist in The Pink Panther 2. Just as the first, the second part of the film was a successful commercial project, and the participation in the film of an Indian beauty only added charm to the movie. Other actors starring in the film were Jean Reno, Andy Garcia, and the gorgeous Steve Martin.

The Return to Indian cinema

In 2010, Aishwarya Rai played in several Bollywood films; among them the melodrama Guzaarish, after which she took a break in her career. Fans were only able to see their favorite actress again in 2015, in the criminal thriller Jazbaa. There the actress played the tragic role of a female lawyer who saves the life of her child, kidnapped by criminals. The movie also featured Irfan Khan and Jackie Shroff.
Aishwarya Rai dancing (in Jazbaa)
In 2016, Aishwarya appeared in the historical drama Sarbjit directed by Omung Kumar and in the melodrama about unrequited love Ae dil hai mushkil, in which the role of her rival was performed by Anushka Sharma. 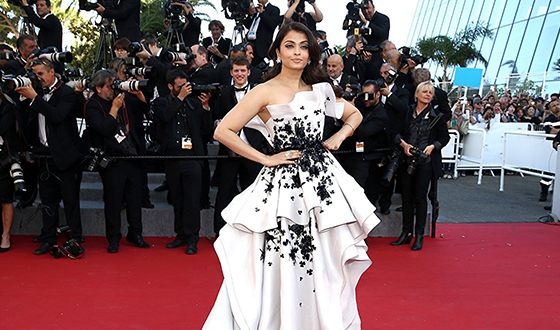 Aishwarya Rai – Indian model and actress, one of the most beautiful women on the planet
In 2017, the star player with Anil Kapur in the touching melodrama Fanney Khan.

Since 1999, the actress dated the actor Salman Khan. The romance of the two most beautiful Bollywood actors unfolded rapidly, yet Salman was jealous of her ex- and future admirers, and could even resort to physical abuse. The painful relationship ended two years later, after which the scarred actress could not start a new relationship for a long time. 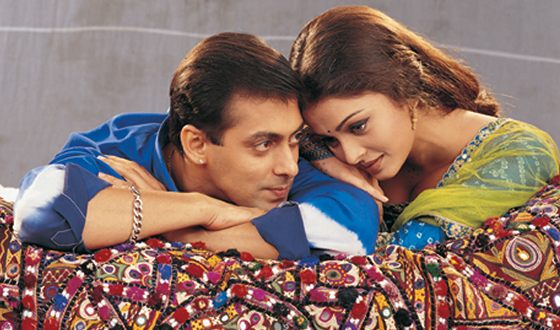 Aishwarya Rai and Salman Khan
In 2006, Aishwarya began dating with the representative of the wealthy actor dynasty Abhishek Bachchan. Their relationship started during the filming of the film Dhoom: 2, in which they were partners. 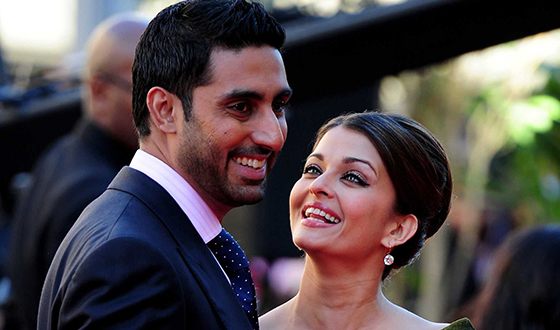 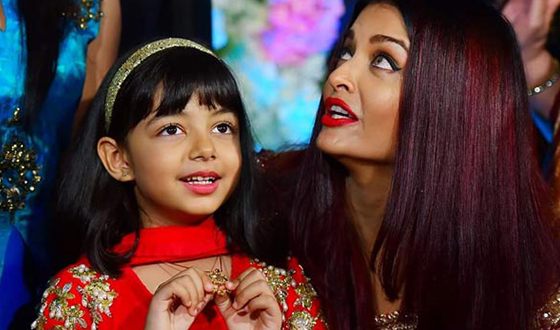 Aishwarya Rai and her daughter Aaradhiya
In 2017, rumors about a possible second pregnancy of the actress, which could explain her next career break, began to appear on the Internet, however, the rumors were not confirmed. In an interview for Elle, Aishwarya said that she had taken a sabbatical in order to give more attention to her daughter and decide which direction she should follow.

Aishwarya regularly appears on the covers of various magazines and is still the face of LʻOreal. She also represents Longines, the elite Swiss watch company, and pleases her fans with her excellent shape, which she managed to recover through yoga and meditation after giving birth. In the autumn of 2018, heeding the pleas of millions of fans, the star started an Instagram account, where she sometimes uploads photos of her growing daughter Aaradhia and shares beauty secrets. In 2020, Aishwarya Rai contracted a coronavirus. The fans became aware of the confirmed diagnosis in July. Then her husband and daughter fell ill. A couple of weeks after the news, the singer was discharged from the hospital.