A 17-year old student that suffered from developmental defects and was one of the students at the school was found responsible for the attack. Wednesday morning he entered the computer science class and pulled a knife onto one of the peer students and afterwards the teacher. After this he poured a flammable liquid all over the floor of the classroom and set it on fire. Concluding the attack with a suicide attempt by stabbing himself with the knife. 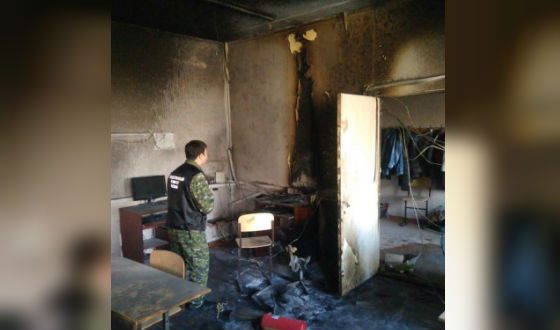 The burned classroom
There were no victims due to the initiated fire. Nevertheless, one of the students got extremely scared by it and ended up jumping out the window for her life. Four people were hospitalized including the aggressor as the result of this terrorist attack.
Students were evacuated from school
It was later discovered that the student who caused the attack had no criminal record whatsoever and, according to his teachers, had no issues at home. One of his acquaintances reported that he complained about being bullied at school. She also made it clear that he admired Eric Harris and Dylan Klebold. These two teenagers gained their notoriety in 1999, by killing 13 students in an organized shooting at Columbine High School in Columbine, Colorado and committing suicide afterwards. Importantly, It was noted that the student had strange content on his social media accounts but no one noticed that in a timely fashion. In particular, he made up a list of his offenders and kept it online. He decided to take action and do justice by himself because his parents refused to get involved and didn’t want to solve his problems.