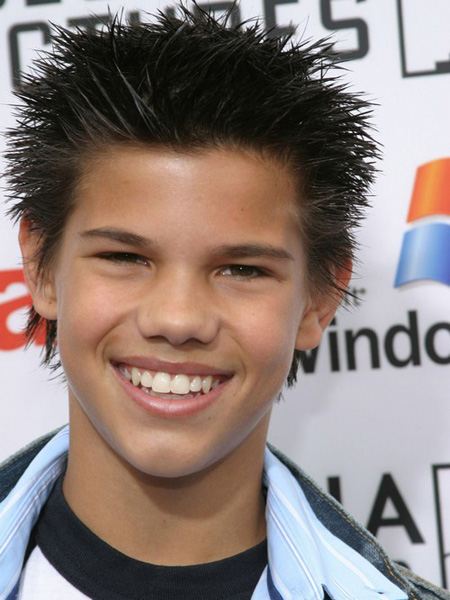 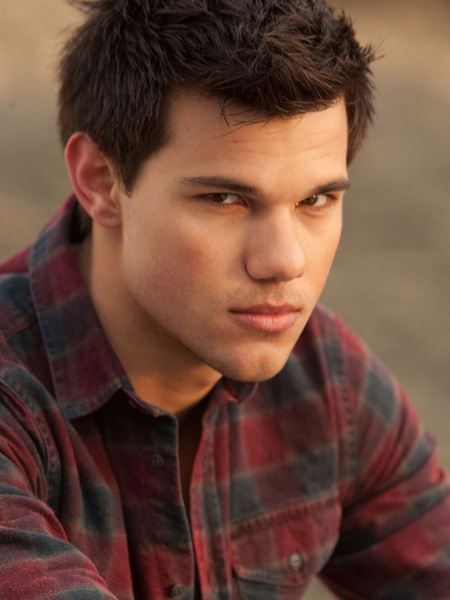 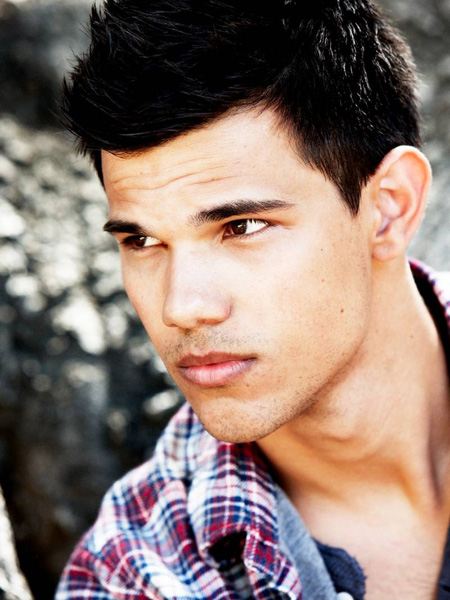 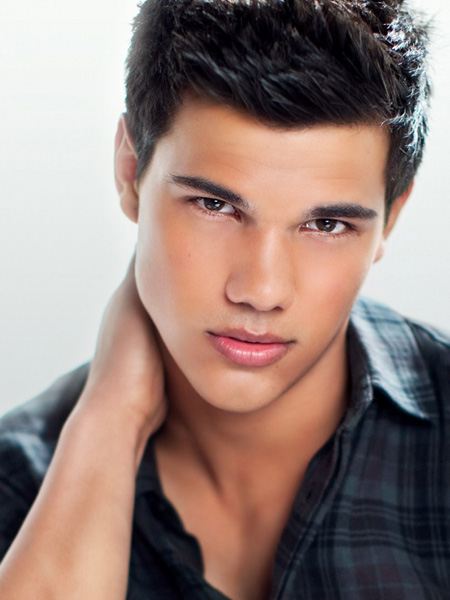 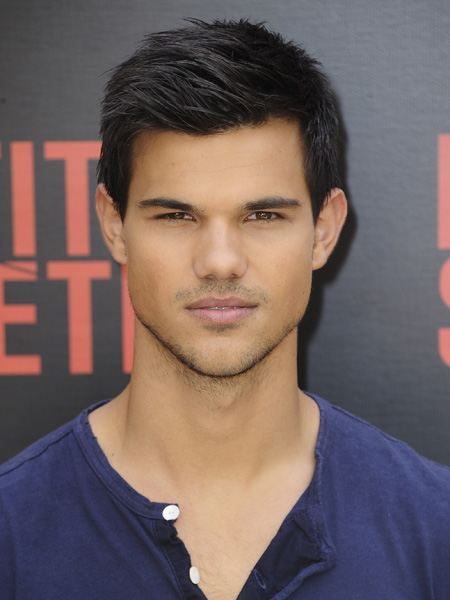 Taylor Lautner is an American actor and model, whose popularity was brought on by the role of Jacob Black in the Twilight series based on the novel of the same name by Stephenie Meyer. Net worth: $40 million. 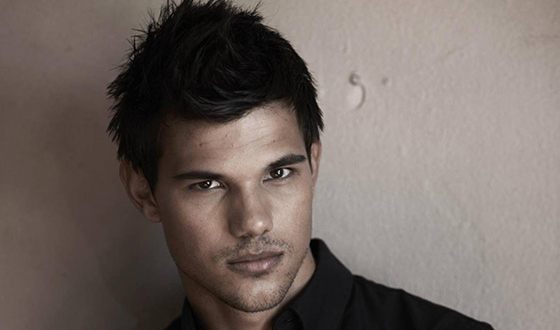 In the photo - Taylor Lautner

Taylor Daniel Lautner was born on February 11, 1992, in Grand Rapids, Michigan. The mother of the actor, Deborah, worked in a software development company, while his father, Daniel, was a Midwest Airlines pilot. Taylor also has a younger sister called Makena. Taylor has an unusual appearance thanks to a wild mix of ethnic blood: he has French, Germans, Irish, and Native American roots. 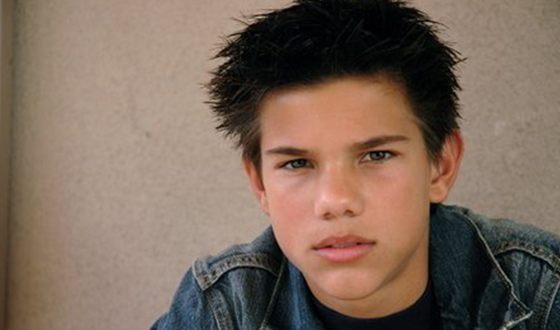 Taylor Lautner as a child
When he was 6, Taylor began practicing karate. His hard work was crowned with success - the boy participated in the national tournament in Kentucky, where he was fortunate enough to meet Michael Chaturantabut, a Thai-American actor and stuntman. The boy trained with Chaturantabut for several years, getting to a black belt by the age of 8, and winning several world championships in the junior league. Alongside with his karate classes, Lautner was fond of baseball, jazz, and hip-hop dancing, and also played in his school’s American football team. But it was namely karate that eventually brought him into the world of cinema - this was what his mentor advised him; he saw some acting talent in Taylor and insisted on it. He convinced the boy to go to casting in advertising, and although he failed the audition, Taylor liked the atmosphere in the studio. The choice of his future profession was made. 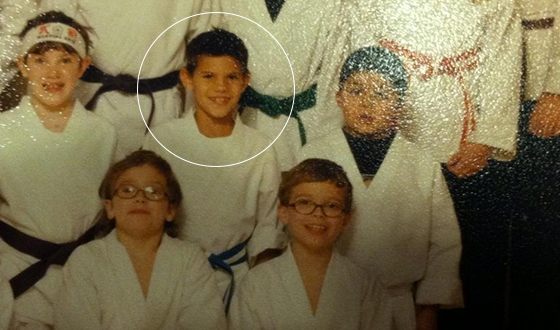 Taylor Lautner practiced karate since his childhood
For several years, Lautner and his parents flew from Michigan to Los Angeles for auditions, sometimes returning to his hometown to the beginning of the school. This schedule made the child very tired, and besides, the relationship with his classmates was getting worse, so in 2002 the family decided to move to California.

In the first years after moving to Los Angeles, Lautner had small roles in TV shows and commercials, and also did voice acting in animation movies (What's New, Scooby-Doo?, Duck Dodgers ). In 2005, Taylor got his first and right away leading movie role: along with Taylor Dooley, he starred in Robert Rodriguez’s film The Adventures of Sharkboy and Lavagirl 3D. 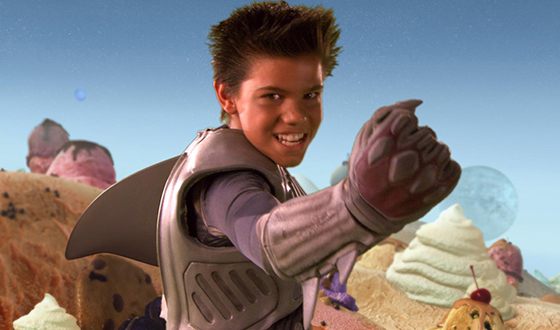 Taylor Lautner in The Adventures of Sharkboy and Lavagirl
The karate classes came in really handy: having found out about the teen's athletic skills, Rodriguez allowed him to direct all the fight scenes in the film. The picture failed at the box office, but Lautner was nominated for the Young Actor Award (the award eventually went to the 14-year-old Josh Hutcherson, the future star of Hunger Games).

Soon, Lautner appeared in an adventure comedy with Steve Martin Cheaper by the Dozen - 2, heavily criticized, and called one of the worst films in the 2000s. A more successful project though was the drama series My Own Worst Enemy (2008), in which Lautner became the son of the character played by Christian Slater. 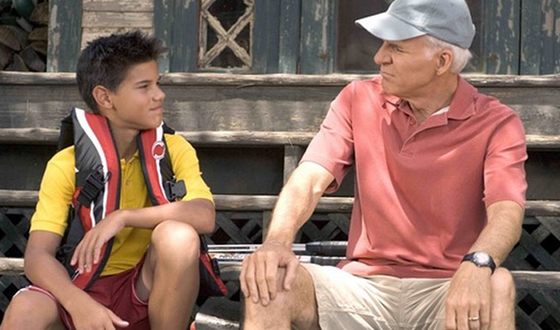 Taylor Lautner and Steve Martin in Cheaper by the Dozen -2
Most of the roles that Taylor was getting were of the same type. The Rolling Stone magazine concluded that Lautner’s early roles were either a popular guy, an athlete, or a bully. But all that changed in 2008, when the actor tried himself for the role of Bella Swan's friend in Twilight based on the novel of the same name by Stephanie Meyer. Lautner had not heard anything about this book, but the agent convinced him to go to the casting.
Twilight - trailer
The producers were pleased with Lautner’s acting and approved him for the role of Jacob Black, a native American from the tribe of Quiletes, who can transform into a werewolf. Other characters of the romantic saga about vampires and werewolves were played by Robert Pattinson and by Kristen Stewart.

The film was a commercial success, earning $392 million worldwide in the first week. In 2009, at MTV Movie Awards, Lautner was nominated for the Actor's Breakthrough: Men Award, but the prize went to his colleague Robert Pattinson. 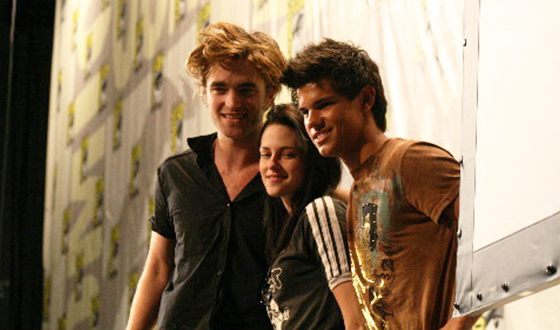 Robert Pattinson, Kristen Stewart, and Taylor Lautner
When they started to shoot the sequel of Twilight Saga. New Moon (2009), the directors were going to find another actor for the role of Jacob - he had to more accurately depict the metamorphosis of the hero and his transformation into a new, big Black. Michael Copon wanted to claim the role, but the role was eventually given to Lautner, who had to train hard and gain almost 15 kilos of muscles. The serious change in appearance fascinated everyone, including Pattinson.

When I saw his body, I immediately thought: My God, they will definitely fire me! – said the actor.

Released in cinemas, the film attracted so many viewers that on the first weekend of distribution, it broke all the records for the box office. Lautner, Stewart, and Pattinson became the teen idols, while the athletic Taylor also got the title of a sex symbol.
Taylor Lautner’s interview
Between the second and third Twilight, Lautner appeared in the romantic comedy Valentine's Day (2010), with Taylor Swift. The pair was nominated for the MTV Movie Awards-2010 Best Kiss award, but the prize ironically went to Lautner’s Twilight partners - Pattinson and Stewart. 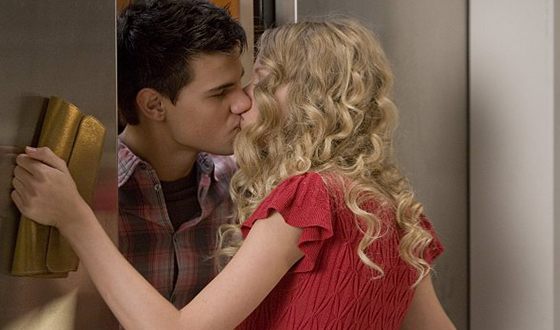 Taylor Lautner and Taylor in Valentine’s Day
The third film, Twilight Saga. Eclipse (2010), received mixed reviews but became the highest-grossing film of the franchise, as well as the highest-grossing romantic fantasy werewolf and vampire film for all years in the United States and Canada. The number of Lautner fans was growing by the day, the number of awards and nominations grew as well, and it became more and more difficult to lure the actor into other projects. However, Taylor appeared in the lead role in the action movie Abduction (2011), after working on the set with the legendary Sigourney Weaver and Alfred Molina and got a lot of negative reviews about his acting.
Abduction - trailer
According to Zoomboola.com, in 2011-2012, the actor starred in the films Twilight Saga. Breaking Dawn: Part 1 and Twilight Saga. Breaking Dawn: Part 2, after which his career declined. These were a small role in the comedy Grown Ups 2 (2013) with Adam Sandler, several episodes in the UK sitcom Cuckoo (2012-2018), the low-rated films Tracers (2015), and The Ridiculous 6(2016), which did not even hit the box-office. 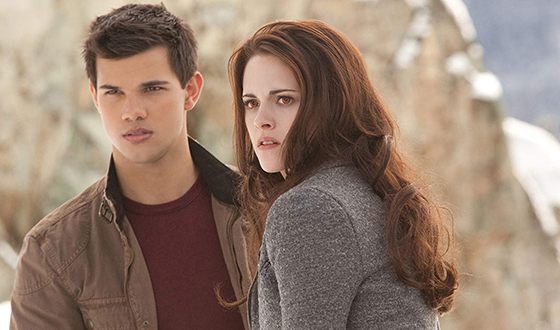 Taylor Lautner and Kristen Stewart in Twilight Saga. Breaking Dawn: Part 2
The indie film Ride the Wave (2016) could have become a new page in the actor’s career, but critics unanimously accused the actor of inconclusiveness. A more successful project turned out to be the series Scream Queens (2015-2016) of the comedy-horror genre, although it was wrapped up after the second season.

Getting out of the shadow of such a hit as Twilight is not easy, Lautner complained in an interview.

In high school, Taylor Lautner began dating his school friend Sarah Hicks. After three years of romance and a break, the young people resumed their relationship until the beautiful blonde actress Mika Monroe won the heart of the handsome Taylor in 2013. 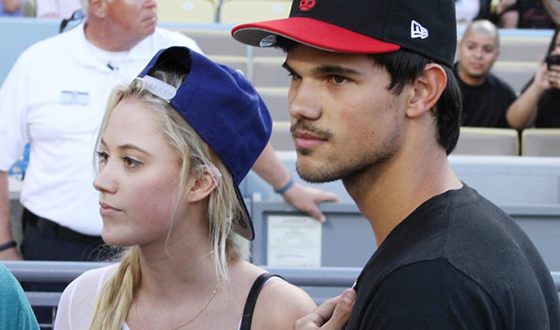 Taylor Lautner and Mika Monroe
Soon, the Canadian actress Marie Avgeropoulos took her place, and then Lautner moved on to model Raina Lawson. 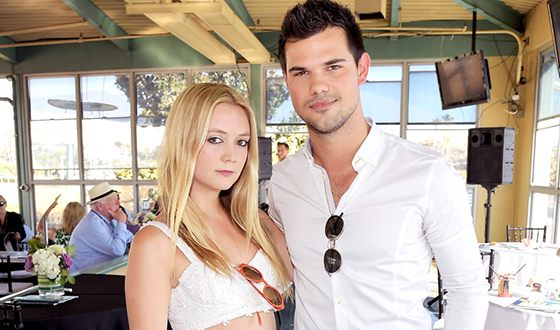 Taylor Lautner and Billie Lourd
At the end of 2016, the actor started an affair with his Scream Queens partner, Billy Lourd, yet in October 2018 he confirmed his relationship with a girl named Tay Dome. In November 2021, he made a propose to Tay.

It is difficult to make any predictions about what Taylor Lautner will do next. The actor admits that he has become very picky in choosing his roles and is ready to wait for a worthwhile offer. Now Lautner has a good time with friends and family, does a lot of sport, travels, and learns to DJ. 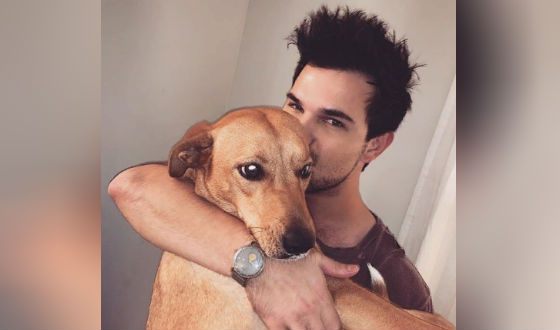 Maisie Williams who are her parents
5.6

Theresa Mary May in her youth
5.6