Who is: politician, president of South Africa

Cause of death: find out respiratory infection

Nelson Mandela’s name is synonymous with freedom. It ranks equally with the names of Gandhi, Patrice Lumumba, and Angela Davis. After spending a quarter of their life in prison, he did not change his beliefs and became the first black president of his country. 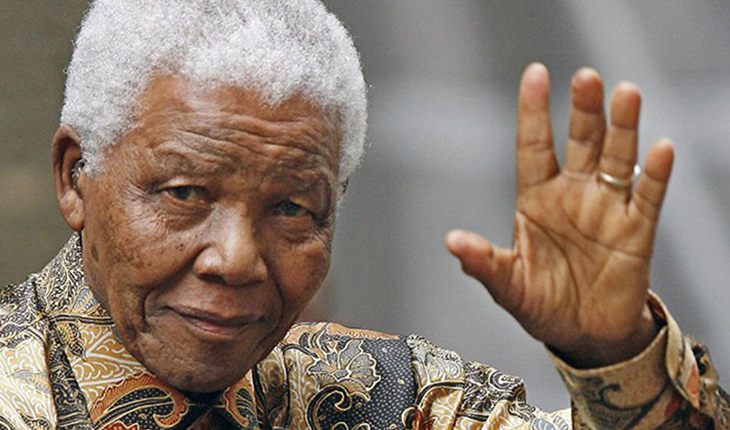 In the photo: Nelson Mandela

Nelson Mandela was born on July 18, 1918, on the east coast of South Africa, in the village of Mvezo neighboring Umtata. The politician’s father, Gadla Mandela, was the head of the village and belonged to the youngest branch of the ruling Eastern Cape dynasty, speaking the Xhosa language. In the course of disagreements with the colonial government, the head of the family was deprived of his position and, together with his wives and children, resettled in the neighboring village.

Nelson was one of thirteen children, who was given birth by the chief’s third wife and received the name Rolihlahla, meaning “troublemaker”. It was difficult for the teachers of the Methodist school to pronounce the African names of the children, so each of them received an English name. Little Rolihlahla was given the name Nelson by his teacher. 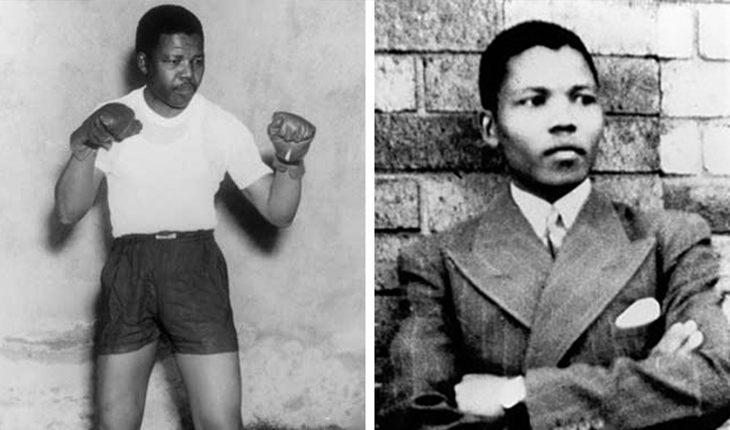 Nelson Mandela in his youth
In the 1930s, Jongintaba Dalindyebo, Gadla Mandela’s associate and assistant, became the temporary ruler of the region. After Gadla’s death in 1927, the Regent Jongintaba became Nelson’s guardian and after the young man had undergone an initiation rite in 1939, he paid for his studies at the public university Fort Hare, one of the few universities in South Africa that accepted black students.

At university, Nelson studied with Jongintaba’s son, studying the humanities. Dissatisfaction with the existing order acquired protest forms after meeting with the student Oliver Tambo. Young people took part in anti-government speeches, for which they were expelled from the university in 1940.

The news that Jongintaba arranged marriage for Nelson led to the fact that the young man fled to Johannesburg and got a watchman job, but soon he became reconciled with his guardian, and he paid for his studies at Witwatersrand University. Jongintaba cherished the hope that Nelson would receive a law degree and become his associate, as Gadla Mandela was. 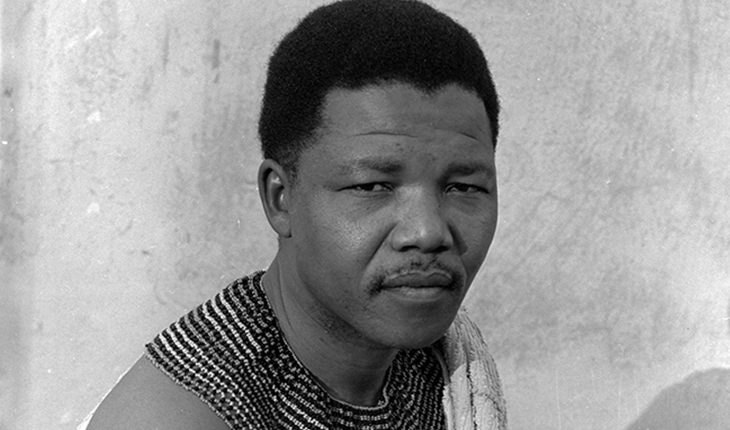 Nelson Mandela in his youth
In Johannesburg, Nelson became a member of the ANC, a left-wing political organization. A year later, he left his studies and, together with Tambo, opened a law office for the provision of services to the black population. 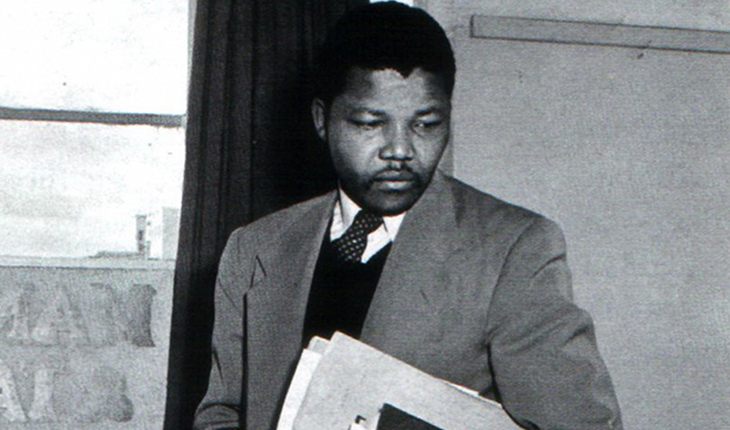 Nelson Mandela at the university
In ANC, Nelson and Oliver met the most prominent Congress activists: Joe Slovo, the son of Lithuanian immigrants, and Harry Schwartz, who came from a wealthy family of German Jews.
Nelson Mandela: Documentary
After the victory of the Afrikaner Party that fiercely supported the policy of apartheid, which many modern scholars call a forced measure against eternal civil wars that tormented the country from time immemorial, in the early 60s, the ANC members began to develop more resolute ways of fighting. The activists began to organize rallies and demonstrations, strikes, demanding the resignation of the government. 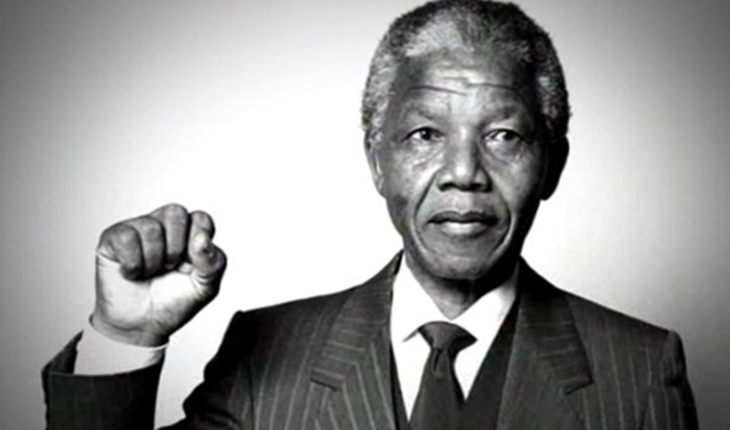 Politician Nelson Mandela
In 1956, about 150 members of the ANC, including Nelson, were arrested on suspicion of preparing an armed overthrow of the government. The investigation of criminal activity lasted almost four years and by the decision of the court all the detainees were acquitted.

Violence in response to violence

As a supporter of Gandhi ideas, Mandela spoke out against the use of violence until the early 60s, but the incident, called the Sharpeville shooting, influenced the change of his political concept. 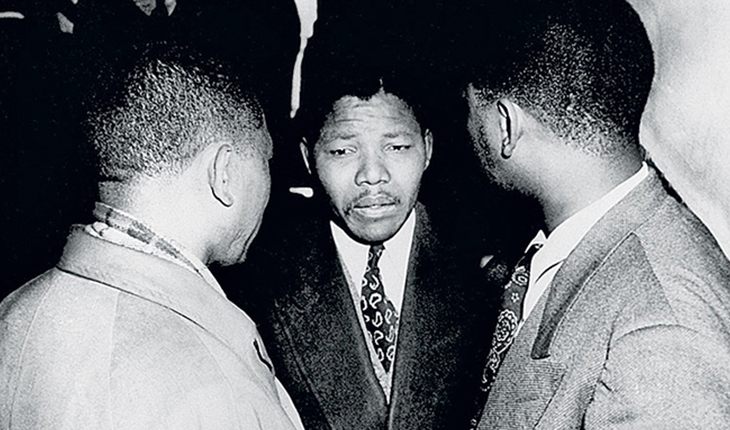 Nelson Mandela with his associates
In the spring of 1960, ANC activists organized a peaceful protest action against the introduction of the pass system. More than 6,000 people came to the police station building early March morning and offered to arrest them for lack of their passes. Despite the fairly correct behavior of police officers trying to calm the crowd, whose number increased to 10 thousand, the situation got out of control, and fire was opened from the top of armored vehicles, as a result of which more than 50 protesters were killed. The UN blamed the South African government, but the authorities chose to tighten the screws and ban the ANC, forcing the opposition to go underground.

In response to the shooting of peaceful civilians, the radical-minded Slovo and Schwartz created an ANC militarized branch, which was proposed to be led by Nelson. The group consisted of the most physically trained members of the ANC and envisaged guerrilla methods of struggle. For two years in large towns and cities, the Spear of the Nation grouping conducted about 200 sabotages at government offices, post offices, banks, and crowded places, which led to the death of hundreds of people. ANC policy was censured by all countries, and Margaret Thatcher called Mandela No. 1 terrorist. 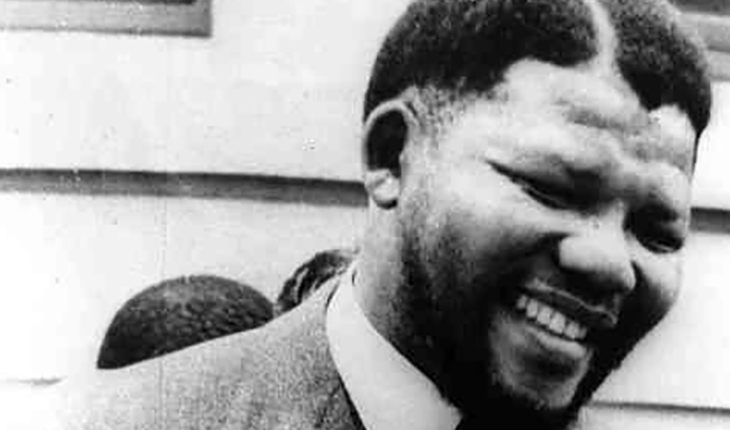 Nelson Mandela
According to Zoomboola.com, in 1962, someone named David Motsamaya was arrested and sentenced to 5 years imprisonment for crossing the border illegally. But the investigation that led to the arrest of the ANC militants and a search at their training bases showed that the commander of the “black bombers” himself was hiding under the name Motsamaya. “The violence of the government gave rise to retaliatory violence,” said Mandela during the trial in 1962.

In the spring of 1964, the militant activists of the ANC and Nelson Mandela were convicted of committing sabotage terrorist acts and the use of tactical weapons against peaceful civilians and sentenced to death, but in April 1964 the death sentence was commuted to life imprisonment.

From 1964 to 1982, the “black bomber” was kept at the establishment on Robben Island, where he was a cartographer, which allowed him to freely move around the island and even live in a staff cottage. Mandela was engaged in writing books and political manifestos, as well as in education. He was finally able to get a bachelor’s degree in the field of jurisprudence. 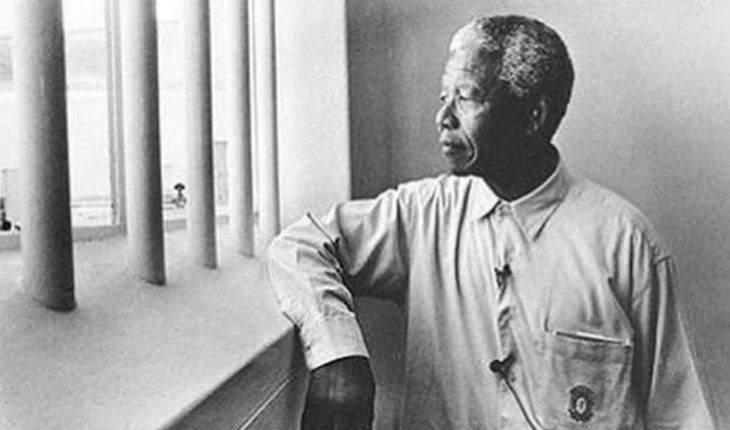 Nelson Mandela in prison
It is known that the South African government repeatedly offered prisoner freedom in exchange for renouncing his political beliefs and violent methods of struggle, but the “prisoner of conscience” did not agree.

At the end of the 70s, the liberation movement for Mandela’s freedom reached a truly universal scale, which was promoted by the competent policy of Slovo and Schwartz, who spread information that he was kept in solitary confinement, was engaged in slave labor for most of the day, and his daily diet was half the diet of a white prisoner. 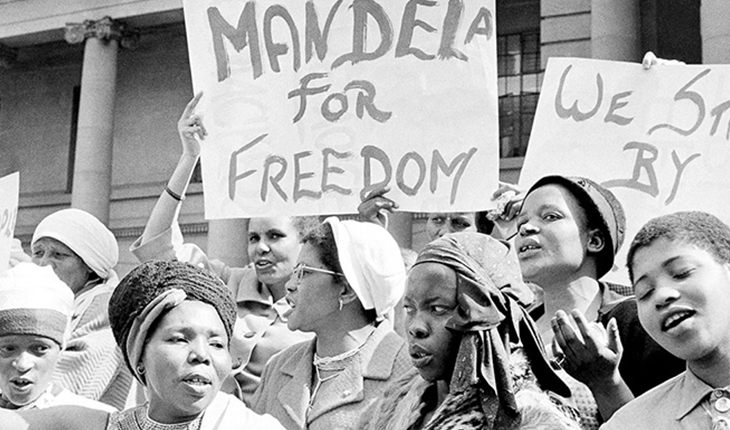 People demand Nelson Mandela’s release
In the spring of 1982, Mandela, who became the most famous political prisoner in the world, was transferred to the Cape Town prison and was soon operated on, since he was diagnosed with a prostate tumor.
Nelson Mandela Gives Speech After Release From Prison on Feb. 11, 1990 | NowThis
Mandela’s deteriorated health was also used by the ideologists of the ANC that remained banned, but this did not lead to the release of its leader. The situation changed only after 4 years. In 1988, President de Klerk signed a decree on the legalization of parties fighting apartheid, including the ANC, and as early as February 11, 1990, the media around the world broadcast the release of Nelson Mandela, who spent 27 years in prison.

In 1991, Mandela was elected President of the African National Congress. Mandela’s speeches of that period contained a veiled call to fight and are more addressed to the government. The leaders of many countries negatively reacted to the release of the freedom fighter, but President de Klerk managed to maintain a shaky balance of power, which had a favorable effect on the internal situation in the country and served as a pretext for awarding Mandela - de Klerk tandem the Nobel Peace Prize. 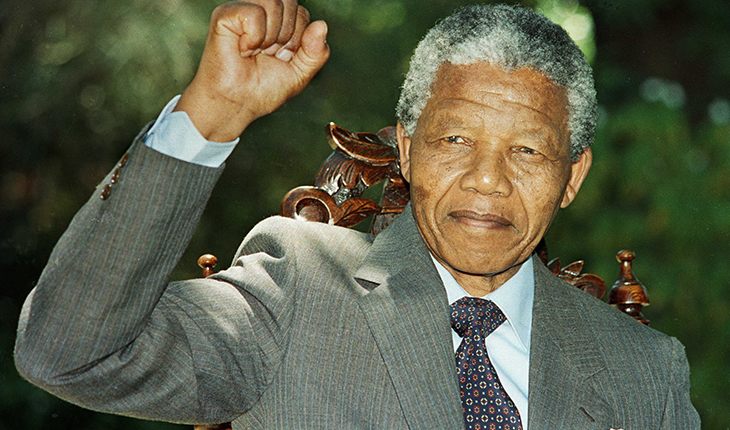 In 1994, Nelson Mandela became the president
During parliamentary elections held in March 1994, the ANC won, gaining more than 62% of the votes, and a month later, Mandela became the president. During his presidency, he issued a series of laws that made a breakthrough in the field of restoring equality between black and white people. Innovations also had a beneficial effect on the growth of the welfare of South African citizens, the development of health and education.
Nobel Peace Prize Award Ceremony 1993
Mandela’s old associate Slovo was appointed Minister of Housing, and Mr. Schwartz was given the position of South African ambassador to the United States of America. 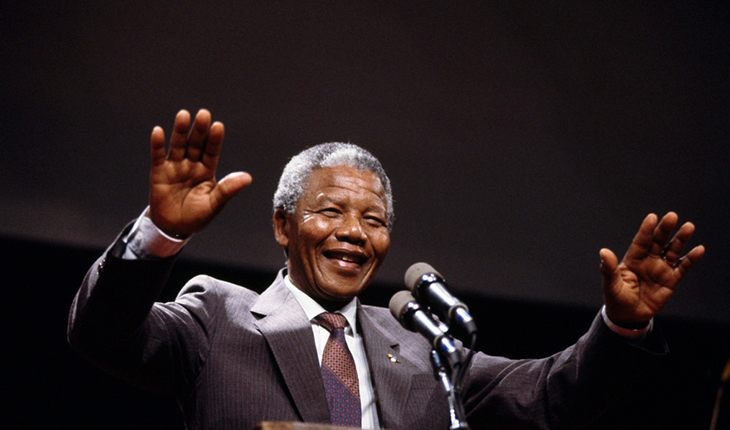 South African President ‒ Nelson Mandela
After the end of the presidential term in 1999, Mandela gave lectures at universities, led some social and political organizations; he was involved in charity work, problems of poverty, and the spread of AIDS.

Mandela’s first wife was Evelyn Mase, the marriage with whom lasted from 1944 to 1958. Evelyn presented her husband with four children: Madiba, the eldest son died during Mandela’s imprisonment, his second son, Makgatho died of AIDS in 2005, and the daughter Makaziwe died in infancy. Pumla Makaziwe Mandela, born in 1954, served as secretary and biographer of her father until his death.

Mandela’s second chosen one was his ANC associate, Winnie Madikizela, who gave birth to her daughters Zenani and Zindzi. Mandela met twenty-year-old Vinnie in Johannesburg, where she came from Bizana to enter the University, but instead became a member of the ANC. During the imprisonment, Vinnie supported her husband, who, after becoming president, appointed her to an executive position in Congress, but soon had to dismiss her after learning of Vinnie’s adulteries and her crimes. 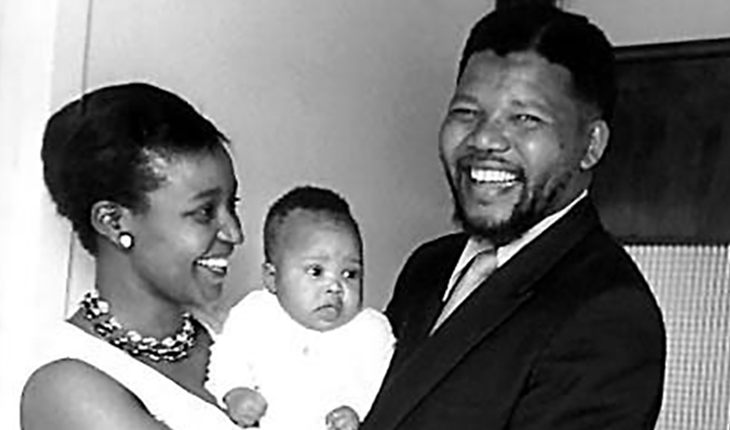 Nelson Mandela and Winnie Madikizela with daughter, Zenani Mandela-Dlamini
In the early 80s, Winnie organized a football club for teenagers from poor families, but the sport was only a cover, and instead of football, the instructors hired by Winnie taught combat techniques to the children and cultivated in them hatred towards whites. At trial, it was impossible to prove Vinnie’s gang participation in the killings of whites, and the woman remained free. In 1991, she was convicted of killing a teenager, but spent in prison only a year and a half: the blame for the crime was taken by another person who was also an ANC activist.
President Nelson Mandela Inauguration Speech May 10, 1994
In 1999, Vinnie was able to take office in parliament, but in 2003, she was fired with a scandal and convicted of fraud, corrupt practices, and embezzlement of public funds. 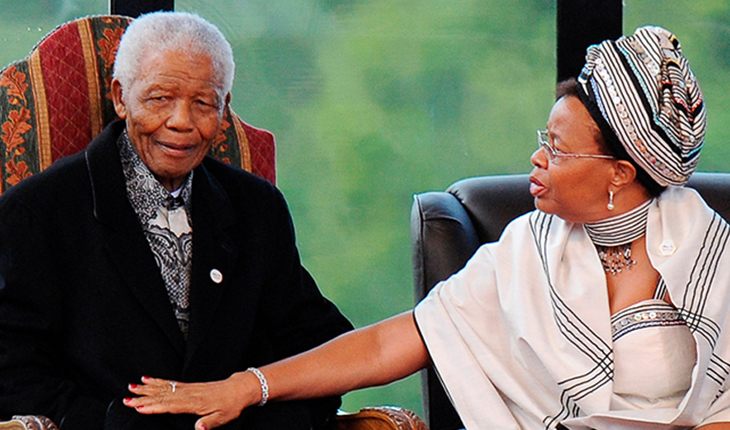 Nelson Mandela with his wife
For the third time, Mandela married the widow of the President of Mozambique on his eightieth birthday. The marriage to Graca Machel lasted from 1998 until the end of the life of the South African president.

The great son of African people died on December 5, 2013. After the funeral that took place in the village where Mandela’s childhood passed, a will was announced, according to which the leader’s money in the amount of almost $ 5 million, his real estate and income from published books were distributed among the heirs, and part of his fortune was transferred to charitable foundations and educational institutions. 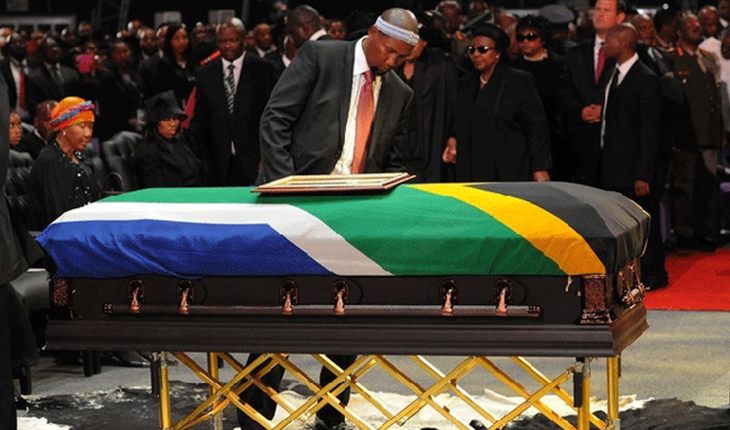