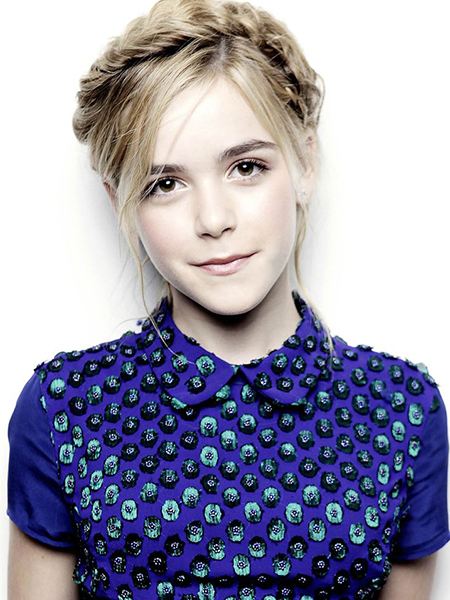 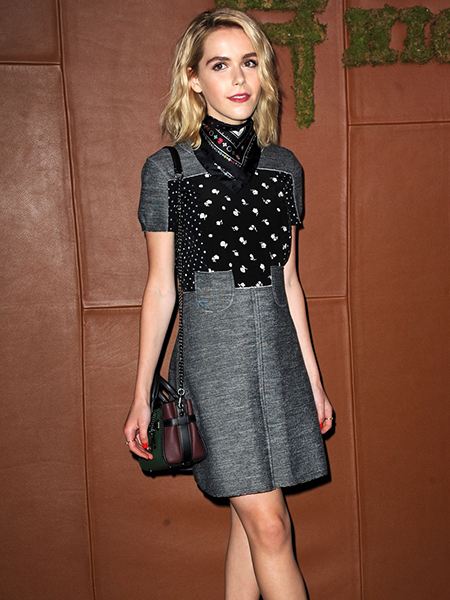 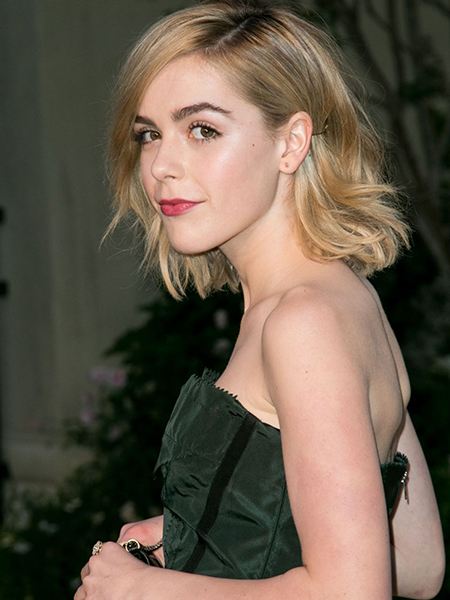 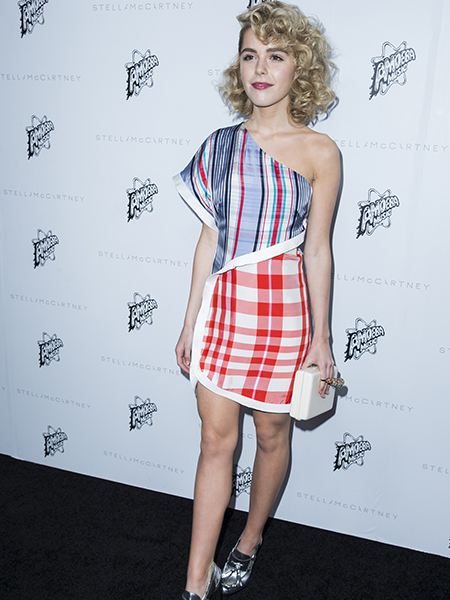 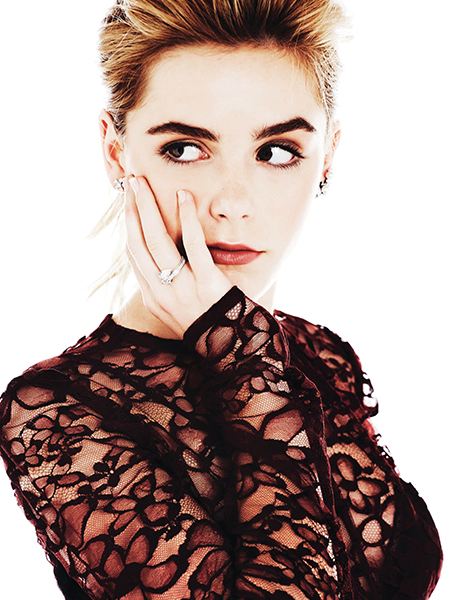 In the galaxy of the new generation of stars, one shines especially brightly, Kiernan Shipka is called the «golden child of television», she is talented, intelligent and very ambitious, but does not suffer from narcissism and does not get into scandalous chronics, but puts all her skills into the development of her creative career. Most viewers recognized her by her role of Sally from the «Mad Men» series, and her participation in the remake of the series about young witch Sabrina is also interesting. Net worth: $4 million. 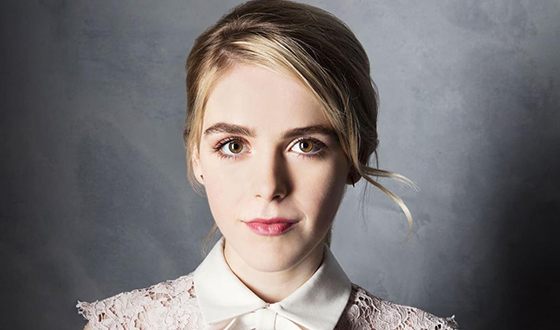 In the photo: Kiernan Shipka

Kiernan Brennan Shipka was born on November 10, 1999, in Chicago, in the family of real estate agent John Young Shipka and his wife Erin Ann. The parents immediately spotted the exceptional creative abilities in their only daughter and began to encourage her passion for music and dancing. Little Kiernan took part in commercial shootings, she was a model, showed clothes for girls, starred in publications. 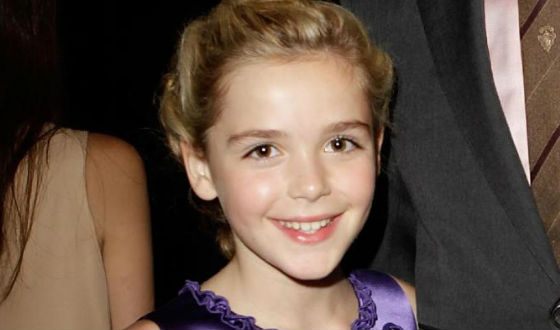 Kiernan Shipka in childhood
The parents didn’t lose, deciding to move to Los Angeles in 2005 and the producers soon noticed the girl. By taking part in several walkthrough projects Kiernan received the role of Sally Draper in the «Madison ad men» (M.ad. men) dramatic series, or «Advertisers working on Madison Avenue».
Little Shipka in a milk commercial

The series has been shot since 2006 and from the very first episode, it received the love of viewers who appreciated watching the life of the director of an advertising agency and his staff. 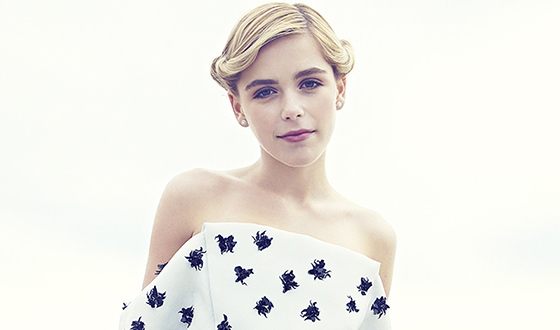 Kiernan became famous as Sally from the «Mad Men»
Kiernan, who played the role of Sally, the daughter of the main character, grew up with her character and from the very first season the billboards and magazines began to call Kiernan «The Golden Child of Television».

When I started acting in the «Mad Men» I was 7. My parents forbade me to watch the series which I starred in! So when the shooting of the last season was over, I made myself the «Mad Men» marathon.

The media was actively discussing the little star, focusing on the rare luck and lucky occasion, as if trying not to notice that the child’s hard work, amazing endurance, and, of course, the talent were standing behind the so-called luck. Kiernan rehearsed a lot, and is fully laid out on the set, she didn’t ignore her studies, training and ballet classes. 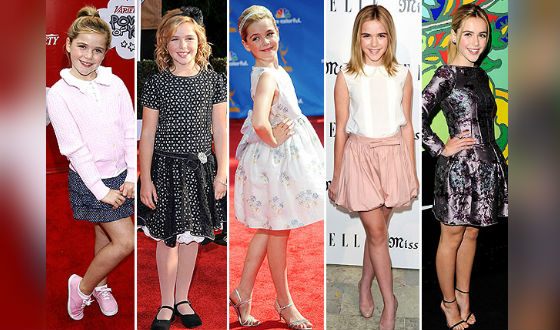 How Kiernan changed over the «Mad Men»
In the sixth and seventh seasons of «Mad Men,» the girl managed to transform, in general, the very small role of the daughter of Don Draper (John Hamm) almost into an independent storyline. Shipka’s play was deservedly highly praised by critics. 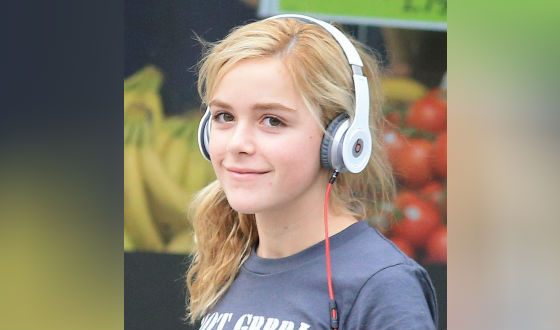 Kiernan Shipka without make-up
For playing the role of Sally the actress received her first awards - the Screen Actors Guild Award and the Young Hollywood Award.

During the set of the «Mad Men» series Kiernan Shipka tried herself in other acting roles. The roles in the «Carriers», «House Broken», «Smooch», the «Flowers in the Attic» were among her most significant roles of that period, where Danny de Vito, Heather Graham, Chris Payne, and Ellen Burstyn became the partners of the young actress on the set at various times. 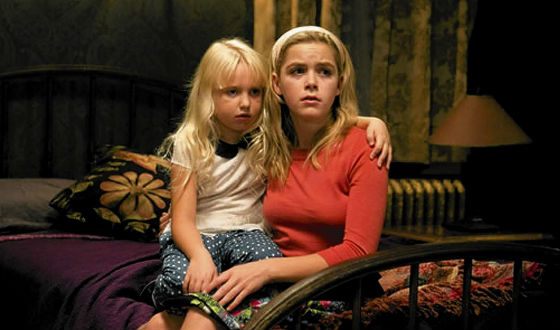 A shot from the «Flowers in the attic»
Kiernan externally graduated from school at 14. She studied under a special program which didn’t provide summer holidays. Because of the constant busyness on the set, the girl kept in touch with the teachers via the Internet. 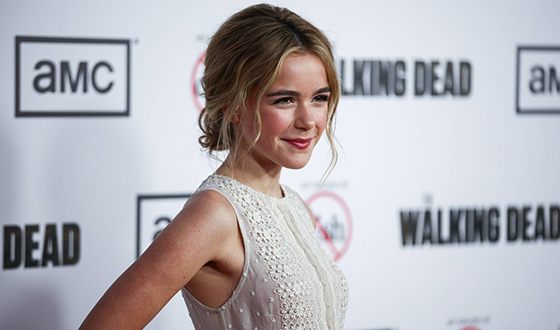 Kiernan externally left school at 14
According to Zoomboola.com, in 2015 Kiernan played in the «One & Two« drama and «The Blackcoat's Daughter« thriller.

The dark, atmospheric story of loneliness and human despair, «The Blackcoat's Daughter« was the first written attempt as a screenwriter and director by Oz Perkins, the son of the great Anthony Perkins. The picture turned out to be imaginative, original, and stellar and Emma Roberts, Lucy Boynton, and Lauren Holly took part in the picture alongside Kiernan. Many critics noted that among the young actresses who took part in the film, Kiernan was the most convincing and showed the great potential for a dramatic actress. 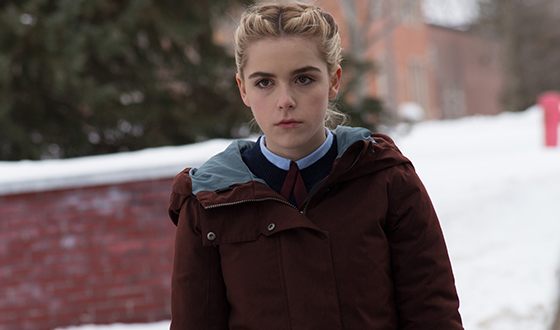 Kiernan Shipka in the «The Blackcoat's Daughter«
In 2017 the actress starred in «The Silence» horror film by John R. Leonetti. Her character is a deaf girl, forced to adapt to life in a new world occupied by mysterious monsters, oriented on hearing. The premiere was scheduled for December 2018. 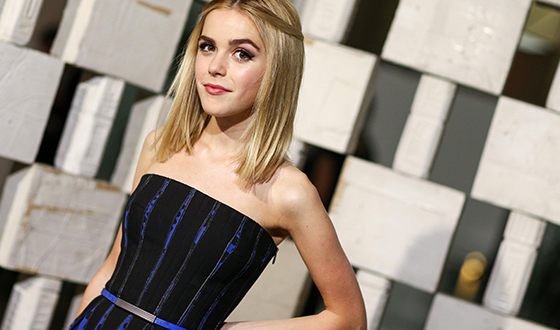 In 2017 Kiernan played in «The Silence»
Late in 2017, an amazing gift was awaiting the fans of the star - News on the imminent release of the remake of the TV series about witch Sabrina were published on the official website of Netflix. Kiernan Shipka played the lead role in the «Chilling Adventures of Sabrina». Ross Lynch took part in the project alongside Kiernan.

The creators of the popular youth series «Riverdale» (the action of the new «Sabrina» takes place in the city neighboring Riverdale) were involved in the rerun. In comparison to the original, the «Sabrina the Teenage Witch« TV series with Melissa Joan Hart, the remake departs from the comedy genre and is intended not for children. More attention here is paid to Sabrina’s comprehension of her witch essence. Episodes with black magic, evil spirits, and murders are awaiting the audience. Disadvantages – Sabrina’s talking cat Salem, beloved by the fans is missing in the new version. 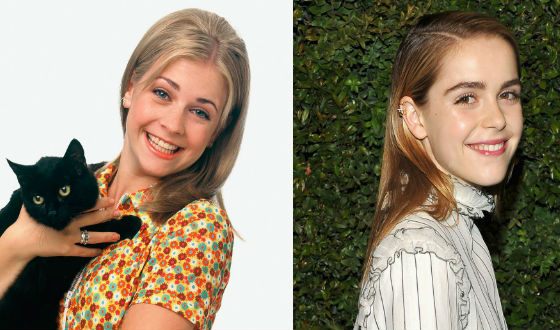 From the left: Melissa Joan Hart who played the first Sabrina Spellman

The yellow press linked Kiernan to affairs first with Timothee Chalamet then with Ross Lynch, but the actress claims that her tight schedule and regular classes on improving acting skills do not yet allow her to have relationships. 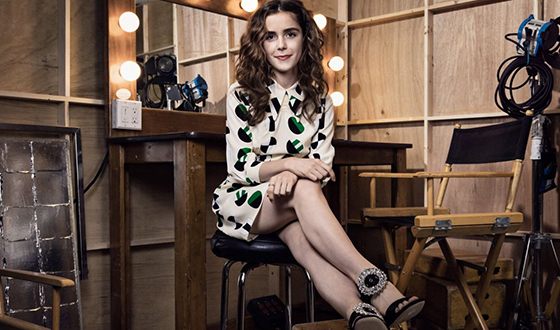 The actress’ heart is still free
Four times a week the girl goes in for ballet, and twice a week in for sports (at 13 she received a black belt in taekwondo). In her free time Kiernan meets with friends, she loves to walk with her dog. Shepherd Frankie even has her own and very popular Instagram account, which the owner has created for her. Fashion bloggers always have a great interest in the girl’s wear, her images with carefully thought-out accessories, and hairstyles in the style of the 60s. Many believe that Kiernan has a huge army of stylists, but it isn’t true - the actress is a big fan of fashion and has an innate sense of style. Kiernan also likes young designers and unusual, a little fabulous and even dolly images. 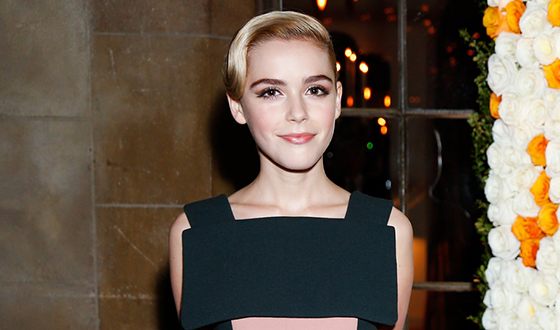 Fashion Bloggers have a great interest in Kiernan Shipka’s outfits
The actress takes part in shows and photo shoots with pleasure. In an interview, Kiernan once admitted that she is a real shopaholic and can spend a lot of time searching for and buying clothes and her ideal actress and style is Audrey Hepburn.

In 2019, Kernan Shipka starred in the thriller "The Silence" as Ellie Andrews. Also, the series "The Chilling Adventures of Sabrina", in which she plays the main role after the first season was extended by a few more. That is why in the coming years, the actress will be busy precisely with these shootings. 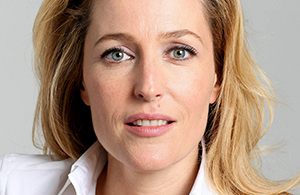 Bella Poarch how old is she
3.8

Taylor Schilling who is her father
5.2