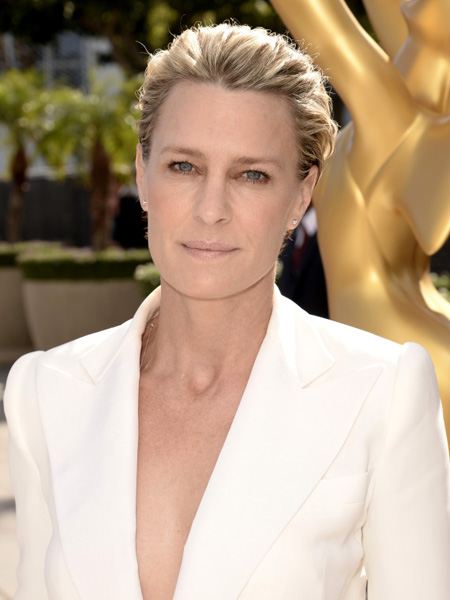 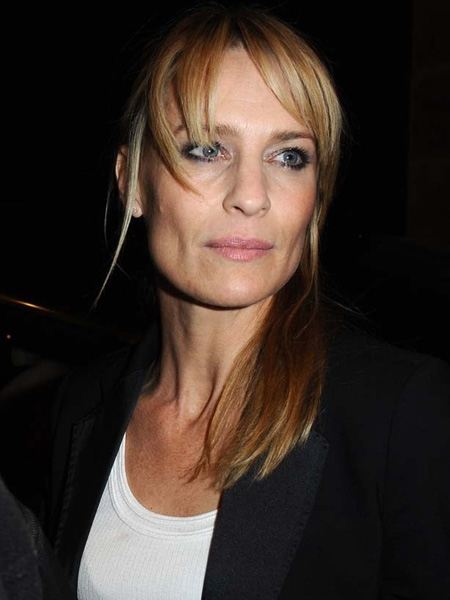 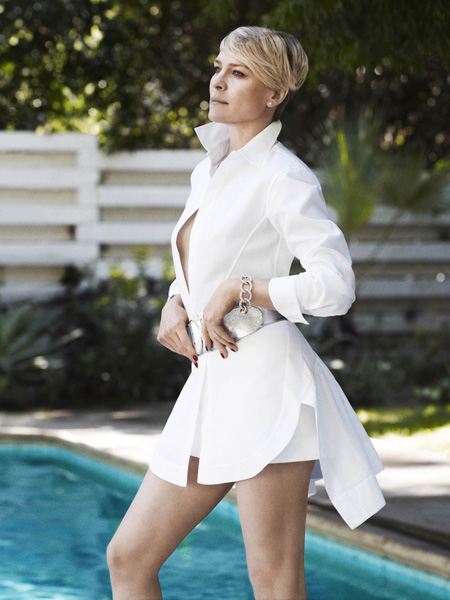 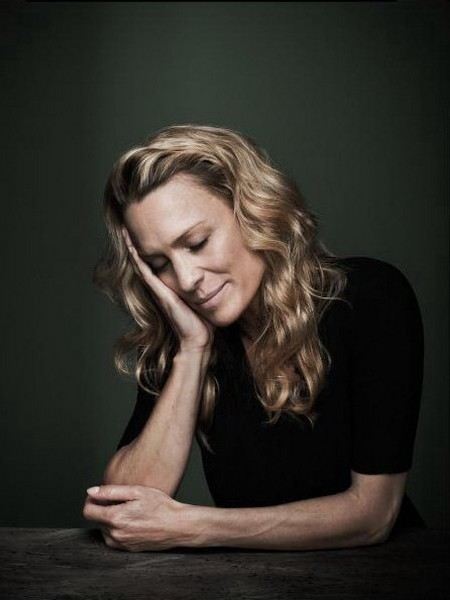 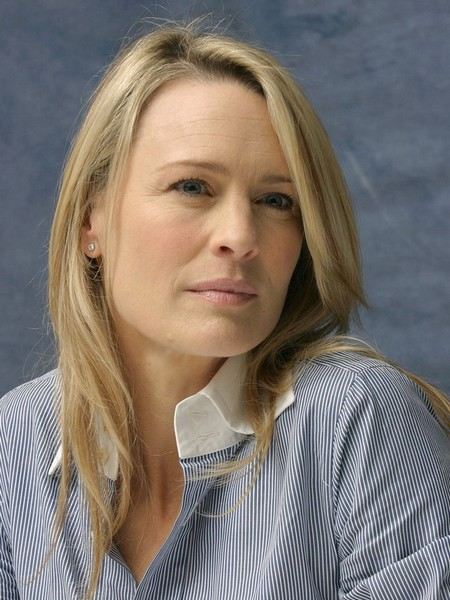 Robin Wright is an American actress, who became famous worldwide due to her role as Kelly Capwell in the legendary Santa Barbara. After Robin’s appearance in the cult Forrest Gump her popularity soared to the skies, and even the ten-year break in her creative career didn’t affect the power of the viewers’ love. Now the actress is back in the ranks and never ceases to amaze fans with her great physical and professional form. Her net worth is estimated to be about $65 million. 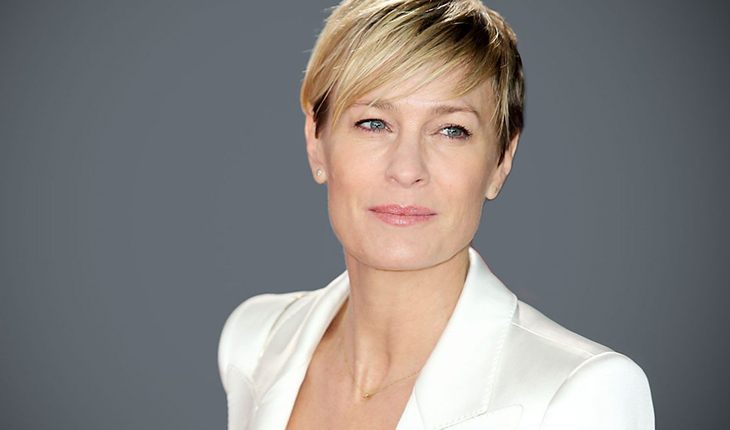 In the photo: Robin Wright 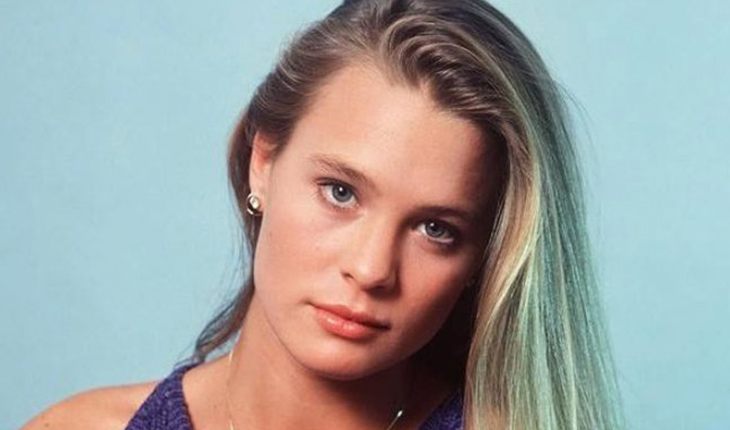 Young Robin Wright
As a child, Robin was a modest and shy girl and spent most of her time in the company of her older brother Richard. He studied ballet and instilled a love of dancing in his younger sister. True, unlike him Robin was closer to jazz and modern choreography, even at a time she dreamed of becoming a Broadway musicals star. The girl studied for ten hours a day in the dance studio and achieved good results, but life made its own adjustments.

Her parents divorced and her mother and the children moved to the seaside town of San Diego. There was no suitable dance school and Robin was frankly bored. She had few friends, mostly boys, and she didn’t study because of congenital dyslexia. 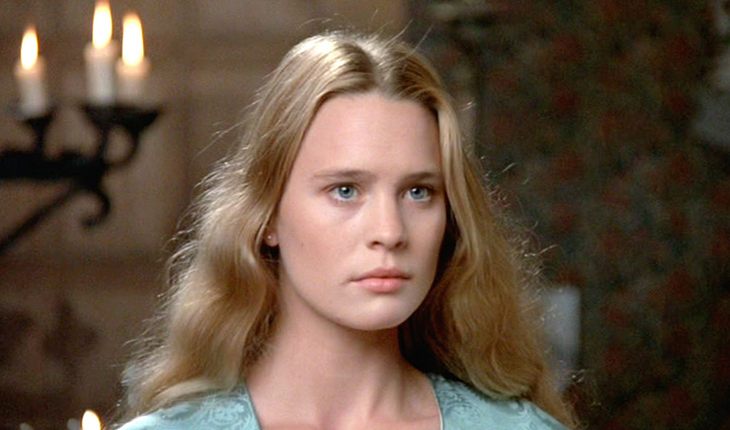 Robin Wright at the earl of her career
The modeling agency, where the fourteen-year-old girl was lured by a recruitment manager who happened to meet her on the street became a vent. The first shootings were very successful and they signed a contract with Robin and a year later the girl was offered a job in Japan. Then the young model went to Europe where she was lucky enough to work with leading fashion brands.

For four years Robin achieved great success in the fashion industry but spending her entire life on the podium was not in her plans. Returning to America she decided to try her hand in acting, hired an agent, and started visiting the castings. Her debut on the screen was a small role in The Yellow Rose (1983–84) TV series, which brought her nothing but deep disappointment. 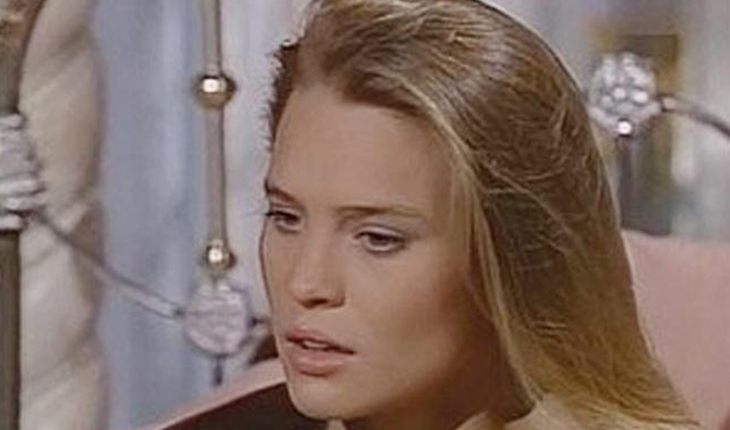 Robin Wright in the Santa Barbara TV series
Desperate, Robin decided to radically change her life and became a waitress on a cruise ship. The day before her departure, she was phoned by her agent and offered to take part in the audition for the Santa Barbara series. The girl didn’t want to appear in a soap opera again but the agent managed to persuade her.

The casting went successful and Robin was appointed for the role of Kelly Capwell, who made her a world-known celebrity. Despite that, the actress doesn’t like to remember that work, which was given to her with great difficulty - the exorbitant pressures and the absence of acting experience and education affected. And yes, the role of the oil tycoon's daughter seemed strange and contrived to her. Nevertheless, Wright managed to hold out for four seasons and leave the series with dignity in 1988, as a holding and quite wealthy actress. 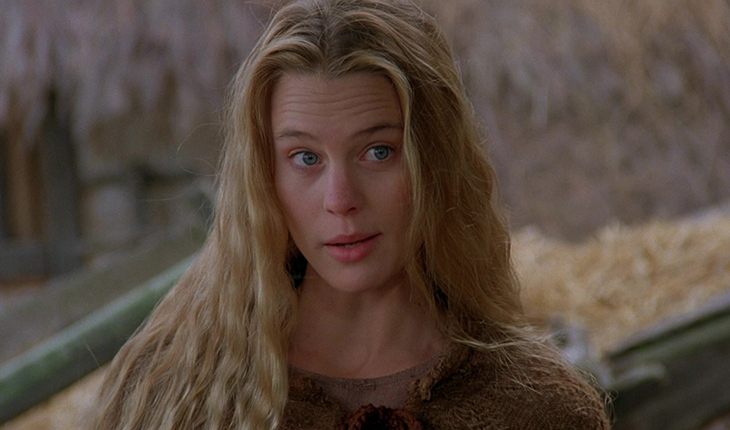 A shot from The Princess Bride
In 1987 Robin first appeared on the big screen playing the lead role in The Princess Bride adventure fantasy. The film collected a good box office and Wright’s acting was highly praised by viewers and critics.

But the top of her stellar career was her role of Jenny in the legendary Forrest Gump (1994) by Robert Zemeckis, who was recognized as a classic of modern cinema. The film became the leader of the hire, received six Oscars and many other prestigious awards.
Forrest Gump (1994) - trailer
Finally, Robin felt like a real actress, in front of which all doors were open and the nomination for the Golden Globe and the American Screen Actors Guild Award gave even more weight to her new status. But despite the staggering success, the actress didn’t build a further career and devoted herself entirely to her husband and children. 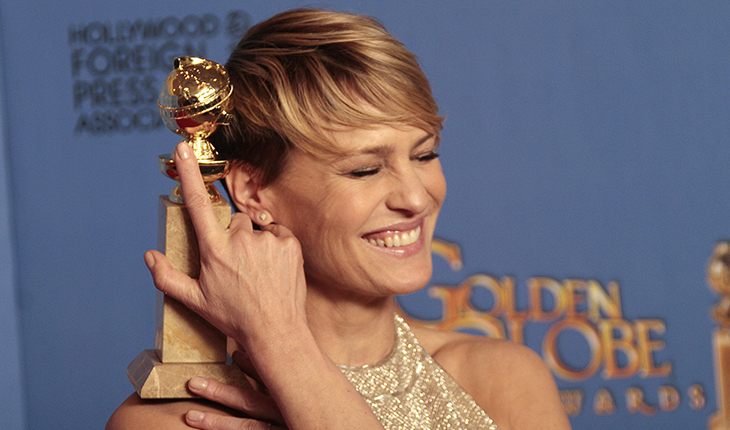 Robin Wright at The Golden Globe Awards
The following decade she almost didn’t appear on the screen and the audience began to gradually forget about her. Only getting completely rid of her exhausting relationship with Sean Penn, Robin was able to fully return to her profession again. She played a lead role in The Private Lives of Pippa Lee (2008) drama, embodied the image of Mary Surratt in The Conspirator (2010) historical drama, and brightly shone in The Girl with the Dragon Tattoo (2011) criminal blockbuster. 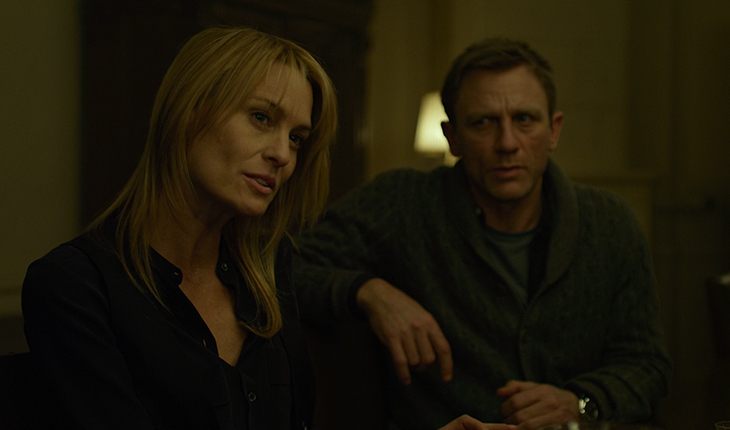 A shot from The Girl with the Dragon Tattoo
In 2013 the actress was offered the lead role in the House of Cards series with Kevin Spacey. It was not easy for Robin to decide to return to television again, with which she was associated not with the best of memories. However, our heroine, who herself had turned from a young romantic girl into a strict and discreet lady by the time, appreciated the image of Claire Underwood, the cold and royal wife of an influential politician. 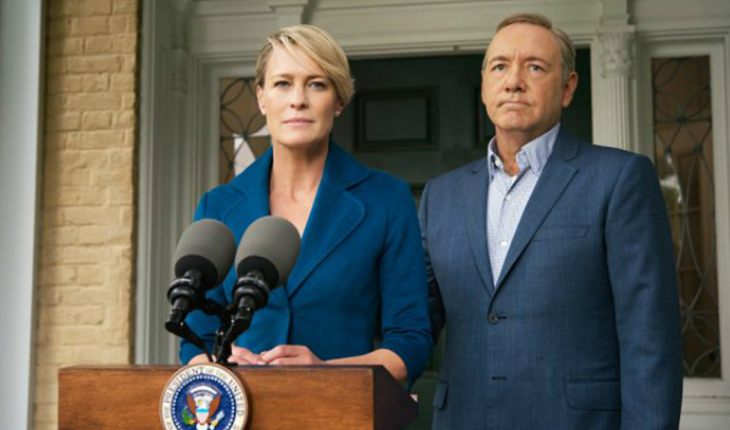 Robin Wright and Kevin Spacey in the House of Cards
The series gathered a multimillion army of fans to the TV screens and helped Wright revive her former popularity, bringing her another nomination for the Golden Globe. And her roles as the Amazons in Wonder Woman, Blade Runner 2049, and the Justice League finally secured her success.

The slim blonde with a model appearance always enjoyed success among men and has been married more than once. Robin met her first husband actor Dane Witherspoon on the set of the Santa Barbara. The love affair quickly grew into a real relationship, which was also on hand to the creators of the series. In 1986 the actors made themselves official, which lasted only two years. 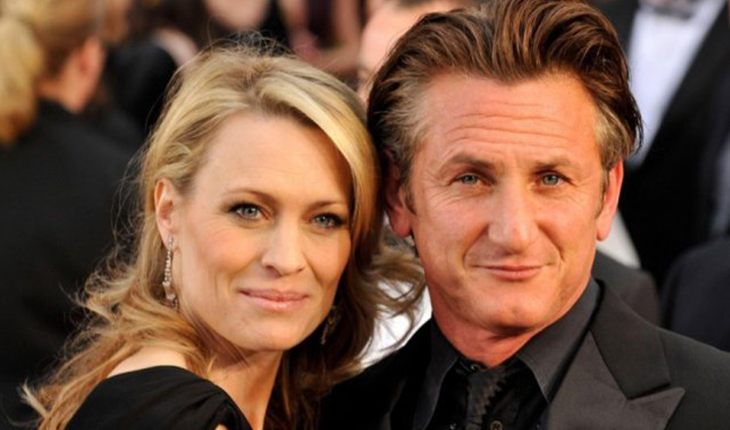 Robin Wright and Sean Penn
In 1989, on the set of the State of Grace Wright met Sean Penn, who had recently divorced Madonna with a scandal. The mad passion overwhelmed both actors with the heads and they didn’t have time to look back, as they became the parents of baby Dylan Frances (1991). A year later Hopper Jack (1993) was born.

In 1996 the lovers made themselves official and the actress began to wear a double surname - Wright Penn. She abandoned her career and devoted herself to her husband and children, moving from noisy and pathetic Los Angeles to the quiet suburb of San Francisco. But the family idyll didn’t last long - Sean and Robin have been painfully trying to part since 2007. They filed for divorce and took it back several times but in 2009 they finally terminated their marriage. 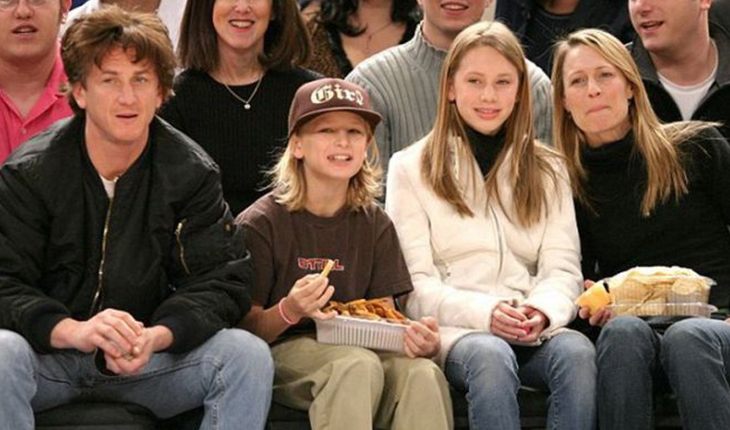 Robin Wright and Sean Penn with children
After a ten-year break, Robin managed to return to her profession and in 2010, rumors spread about her affair with actor Ben Foster, fourteen years younger than her. The new relationship literally revived the actress: she made a stylish short haircut, reviewed her wardrobe, and turned into a real, strong, and confident lady. 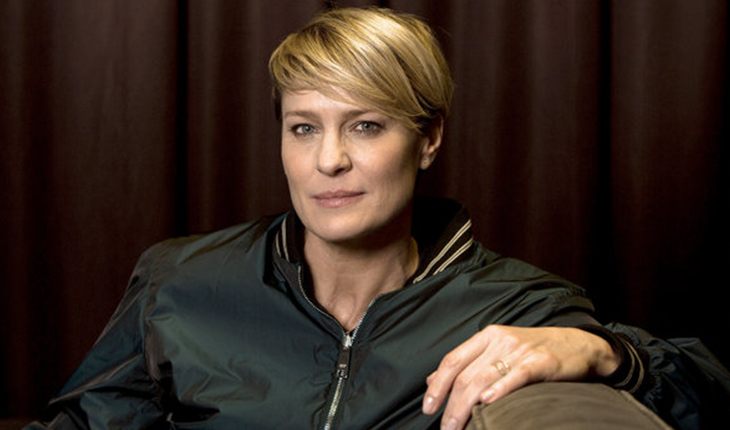 Stylish and confident Robin Wright
The relationship with Foster didn’t last long but Robin was no longer unstoppable. In 2017 the actress met Clement Giraudet, the PR-manager of the Yves Saint Laurent fashion house. The twenty-year difference didn’t hinder their feelings and in August 2018 the lovers played a secret wedding in France, which was attended only by their closest friends and relatives.

In 2020 the Wonder Woman 1984 sequel fantastic saga, where Robin will again appear as a strong and fearless Amazon, was released. Despite the fact that the actress has already exchanged her sixth dozen, she looks great and is in excellent physical shape. In order to organically get used to the image, she had to learn horse riding and the basics of martial arts, as well as return to dance and sports acrobatics. Zack Snyder's Justice League mini-series is scheduled to premiere in 2021. In its filing, the actress participates with Ben Affleck and Amy Adams.
Zack Snyder's Justice League, Trailer
In parallel with her acting activities Wright is a member of a charity foundation that supports creative young people and helps adolescents overcome alcohol and drug addiction. The actress knows about these problems not by hearsay because her son Hopper was repeatedly detained for possession of prohibited substances.

16 celebrities who have aged gracefully (photo) 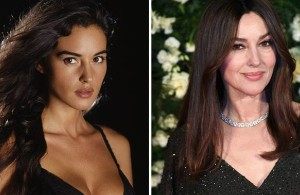 Everyone is afraid of old age because it takes away strength, energy, and beauty. But she only paints some celebrities - the women from this photo...