Regional statesman from «Fair Russia» political party, Mihail Puchkovsky had required to equip the spot administration’s building with parking place for horse – a hitch. The man have changed car to the stallion named Rocket because of high prices of petrol. 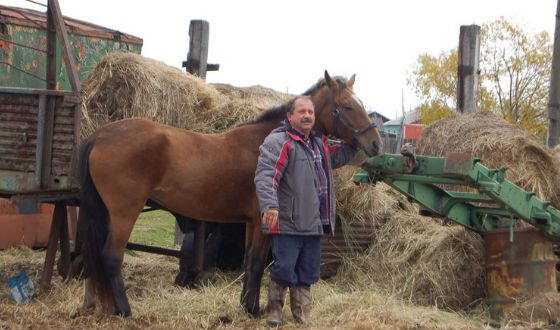 Mihail Puchkovsky and his horse
According to Mihail, during the last week petrol’s price has increased in 5 rubles per liter and now one liter of 92 petrol is costing almost 50 rubles ($0,8) while his monthly salary is 23000 rubles ($370). Now Mihail is going to get on his work by horse.

Puchkovsky’s colleagues didn’t support his idea. They clubbed together and present a monthly bus card to Mihail. «It’s dangerous to ride on a horse in the city: dangerous for you, for people and for horse», – the «United Russia» party deputy Anatoliy Kurnosenko said.

Puchkovsky haven’t received bus card and called his colleagues «retarded». «You’d better give a bus card for every pensioner of our region – it is 96000 citizens! Their reaction suggests that they haven’t understood my message. But it’s ok, sometimes they doesn’t understand even multiplication table», – said Mihail.