9 World Most Famous Theatres
Discuss
8
People used to book tickets in the world-known theaters long before the performance. Let’s observe the reason this sightseeing attract the drama geeks all over the planet and the price of a ticket in the best theater in the world.

Top Famous Theatres in the World

The European capitals are bustling with activity. Paris, London, and Milan attract more than just vindictive fashionistas and tourists with cams but intelligent who also have reasons to visit these cities. We are talking about those appreciating architecture, theater, opera, ballet, and music.

The capital of Great Britain has numerous theaters with its own history. Shakespeare's plays were performed on the stage of London’s «Globe» for the first time. Despite two reconstructions and open doors each day, the «Globe»’s glory was beaten by Royal Opera at Covent Garden, the Royal Ballet’s home stage, and the Royal Opera House. 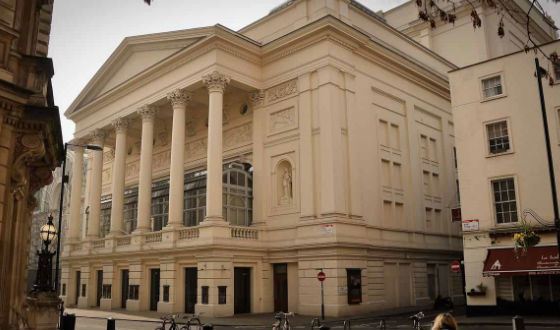 The most famous theater of London on Covent Garden
Today’s opera building is the third one. For the first time, the theater opened its doors to visitors in far 1732. They came to watch the performance «Secular oratorio» by William Kongreve's play. 76 years later the Covent Garden’s building was ruined by fire. The recovery took 9 months. Newly opened theater pleased the public with «Macbeth». In 1856 the theater burned down againю Two years later it was recovered again and still keeps its form, which we can observe nowadays. 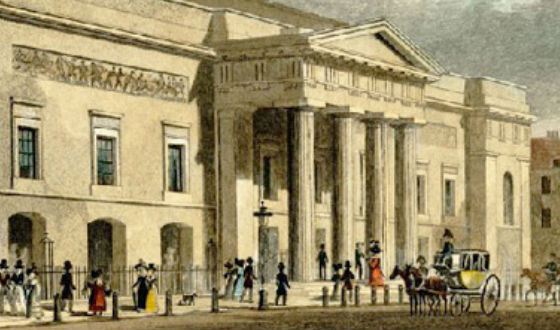 The second building of Covent Garden (1827 )
The large-scale reconstruction of the theater took place in 1990. Today its 4-level hall accommodates 2268 visitors. The price of tickets at Covent Garden varies from 15 to 135 pounds. 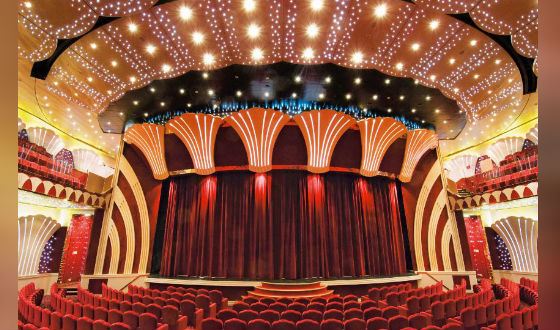 The Palais Garnier or Grand Opera

The Palais Garnier is the most known theater of Paris. In 1669 Louis XIV gave a green light to opera theater foundation dedicated to the poet Pierre Perren and the composer Robert Kamber. Throughout centuries the theater changed its name and location several times up to the moment it appeared in Paris district in IX century. It started performing in the Palais Garnier, erased by the architect Charles Garnier in 1875. 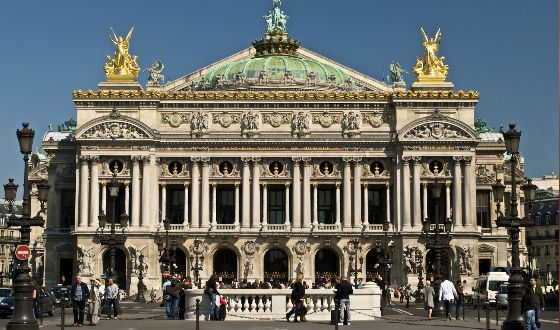 The Paris opera of Charles Garnier
The theater face side looks magnificent since it is decorated by four sculptures (an embodiment of the Drama, Music, Poetry, and Dance). It also has seven arches. The majestic shining dome crowns the building. 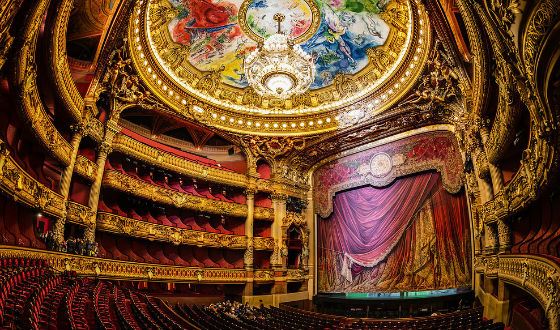 Inside the Palais Garnier
The Grand Opera’s artists performed German, Italian, and French composers’ opera during the years of its existence. It sheltered the premiere of «Ballerina and Moor» opera by Stravinsky. Its today's name is Palais Garnier, and it is nearly the most visited theater in the world.

Austria is the homeland of many classics like Haydn, Mozart, Beethoven, whose music formed the basis of the Vienna classical music school. Possibly this proves the reason why we can name the Vienna Opera the most famous theater in the world. 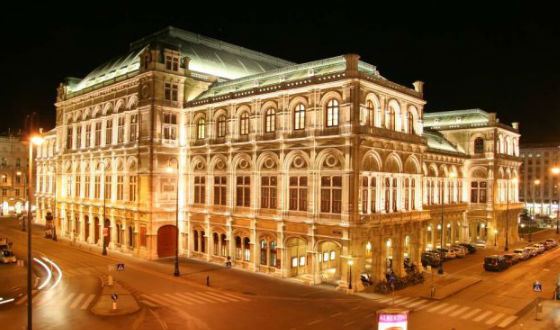 The Vienna State Opera
The building of the opera was built in 1869. Its opening was marked by Mozart's opera «Don Juan».
Vienna Opera House
The building often became the object of severe criticism since it was built in extremely widespread neo-renaissance style. The theater’s face side seemed to Vienna’s residents boring and inconspicuous. 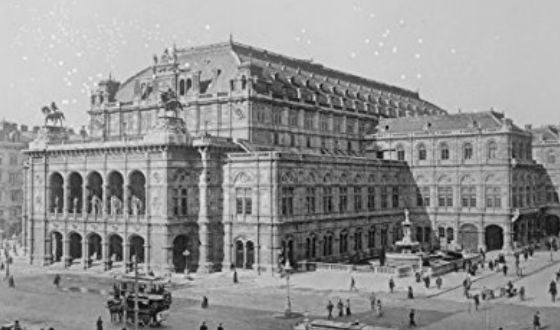 The old photo of Vienna State Opera (1900)
During the World War II, the theater was partially destroyed. However its solemn re-opening took place with the opera «Fidelio» by Beethoven in 1955. None of other opera theaters cannot compare with the Vienne State Opera by the number of performances. During 285 days in a year, this building on Ringstrasse shows about 60 operas. Every year, one week prior to the first day of the Great Catholic post, this place shelter the event, which was included in the listing of non-material cultural wealth protected by UNESCO. 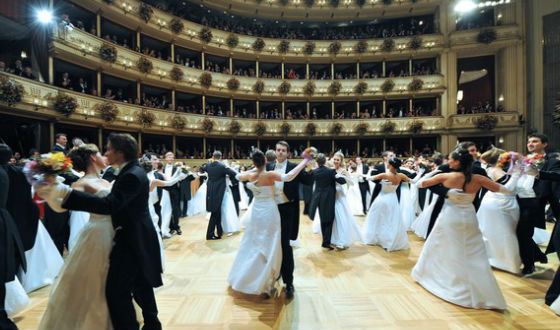 The modern opera art roots from the Italy, Renaissance epoch. In 1776, the Milan architect Giuseppe Piermarini liked the piece of earth on the site of the destroyed Church of Santa Maria Della Scala. He decided to construct the opera theater on this place, which inherited the name of its ancestor building. 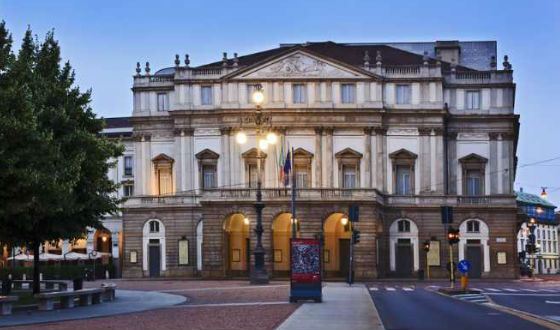 The La Scala Opera building
When the base underground was constructed people found a marble slab with the image of the ancient Roman actor Pilad. Builders apprehended this as a sign from above. The «Europa riconosciuta» by the composer Antonio Salieri became the first opera of the La Scala theater. The orchestras by Gavazzeni Gianandrea, Arturo Toscanini, and Riccardo Muti sounded within these walls for the first time. 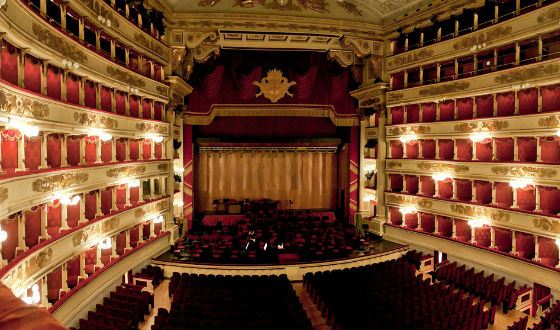 Inside the La Scala Theater
Today the La Scala is appropriately seen as one of the most known theaters of the world. This theater is the first to be seen by tourists in Milan after the Milan Cathedral. 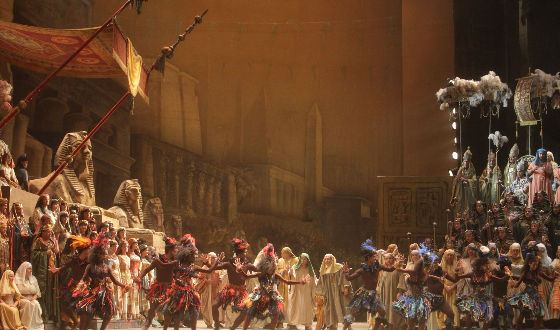 The photo is taken at the «Adia» opera by Giuseppe Verde
The reconstruction of the theater was carried out at the beginning of 2000 for the last time. Its opening took place in 2004. The opera «Europa riconosciuta» by Salieri was again shown at the updated stage.

The Palace of Catalan Music in Barcelona is a quite young opera house (in comparison with previous ones). It opened its doors for the musical esthetes in 1908 only. The Barcelona’s society loves the Spanish modernist style of Gaudi, and therefore it was decided to build the main concert hall of the country in the same style. This is why waves and spirals prevail over straight lines here. 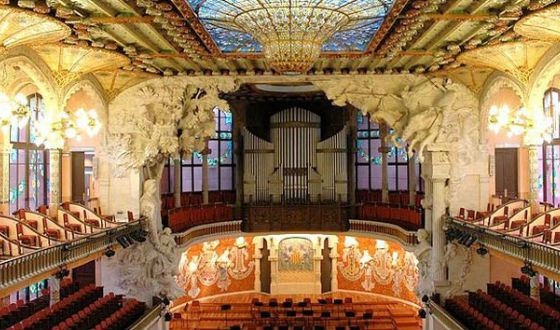 The Palace of Catalan Music is lit with the sun
The facade of the Palace reminds that in Spain is the place where the European and Arabian cultures intertwined closely. 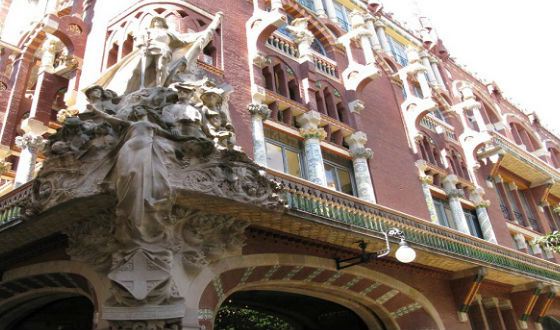 еThe facade combines the features of European and Arabian architecture
But the main feature of the concert hall is its lighting. The illumination is completely natural. The Palace of Catalan Music’s dome is made of a color glass mosaic fully. Beams of the sun, refracting, create an indescribable effect! 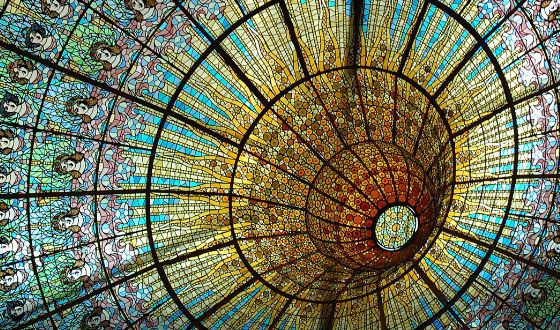 It is hard to call the Sydney Opera the most visited opera house in the world, but it is definitely the most recognizable and {ai:66264} unusual opera house{/ ai}. Its white sail-like walls are considered to be one of the world modern wonders. 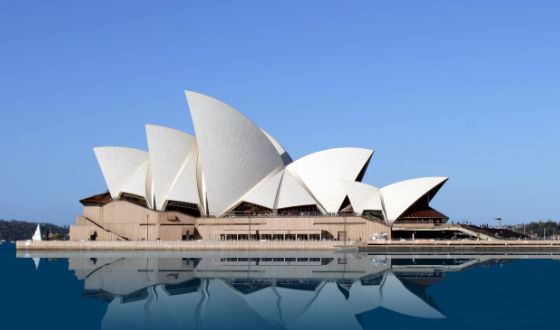 The Sydney Opera House in the afternoon
The ceremony of its opening took place in October 1973. The Queen Elizabeth II visited the event. 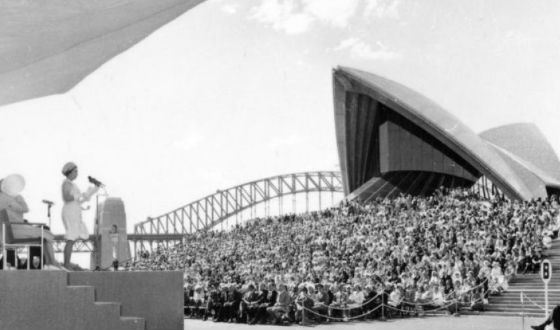 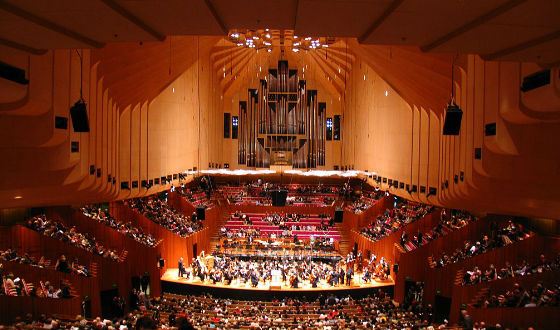 This is how the most famous Australian opera house looks inside
The total area of the building exceeds two hectares. Inside you will meet almost one thousand rooms since the building serves the «headquarters» for the Australian Opera, the Sydney Symphonic Orchestra, the National Theater Ballet School and the Sydney Theater Company. 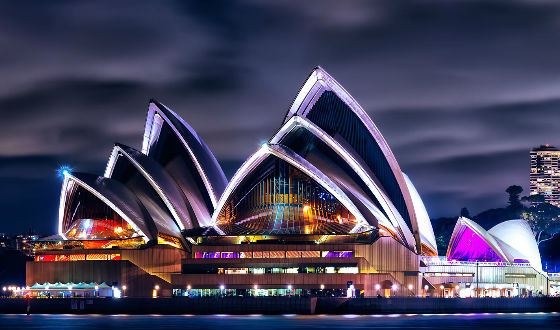 The Sydney Opera House at night
The opera house takes for its illumination the energy quantity enough to lit a small Australian town.

We have got a lot of information about the European opera houses. And what about the theater art in the East? What features it has? in particular, let’s learn the Japanese theatrical culture. 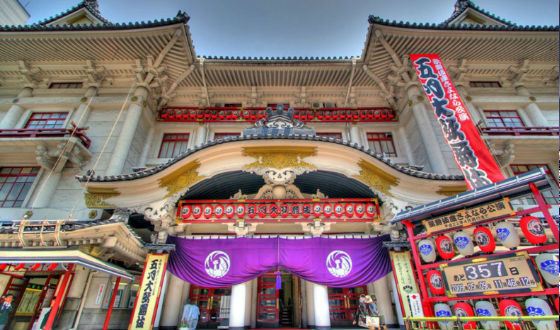 The Kabukiza Theater is located in the Ginza area, the center of Tokyo
The classical Japanese theater integrates on its stage the drama, music, dance, and verses. The stage decoration during performances is plain in spite of the masks and a kimono of actors. The performances plot is usually hard to be understood by the unsophisticated viewers unfamiliar with the Japanese culture and not capable of understanding a set of thin hints to mythology, literature, and history. 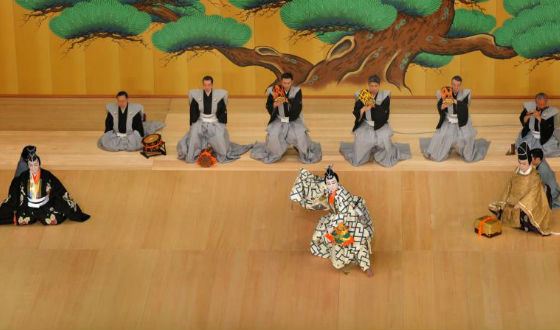 The deeper meaning is behind the plain decorations
Nevertheless, the Tokyo Kabukiza Theater is adored by either Japanese or tourists. None of 1964 seats in the concert hall is empty during the performances. The price of tickets begins from 15 thousand yens. Viewers can buy an audio guide for an additional price, which will explain all nuances of the performance.

Built in the center of Manhattan in 1932, the theatrical concert hall Radio City Music Hall became one of the favourite entertaining places of New Yorkers. Performances, musicals, jazz orchestra performances, fresh movies debuts– all this could be seen there. 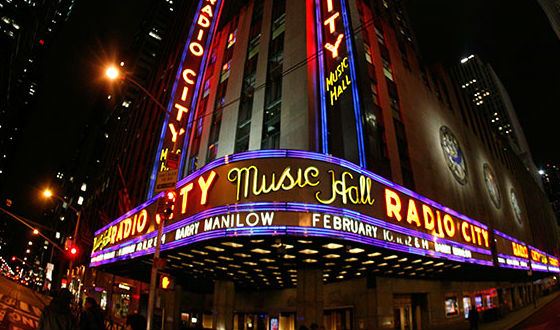 The spirit of Broadway lives here
The epoch has gone, but the chic and gloss of the Broadway musicals of the 20th century still captivate both Americans and tourists.
The Christmas musical is especially popular
The Radio City Music Hall can accommodate 6 thousand people at once therefore on its stage national events like the Grammy Musical Award are often held. 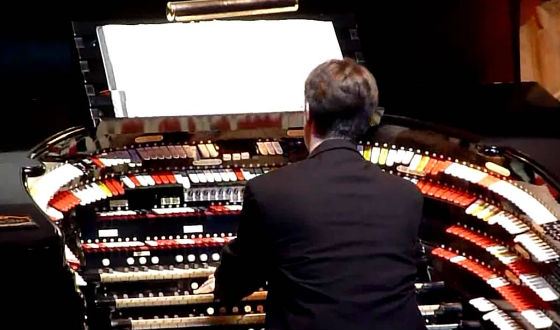 It is also called the Saxon State Opera or Semperoper in honor of Gottfried Semper architect. The majestic building in style of the neo-renaissance accommodated the first visitors on April 12, 1841. The Goethe's play «Iphigenia in Tauris» was the first performance sounded from its scene. Afterward, there took place premieres of many operas of Richard Wagner. 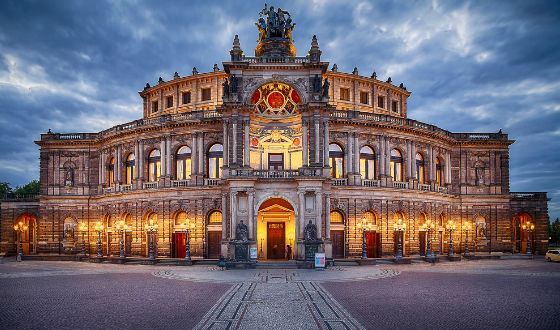 The dramatic building of the Semperoper
The facade is decorated with antique German mythology sculptures and literature and also sports the statuettes of great playwrights. 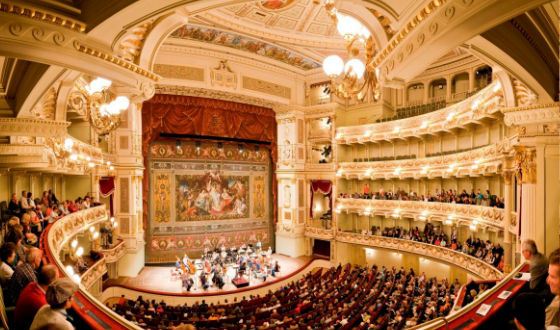 Inside the Saxon State Opera
The World War II destroyed Semperoper. The building was completely recovered only in 1985.

The bombs destroyed the Semperoper